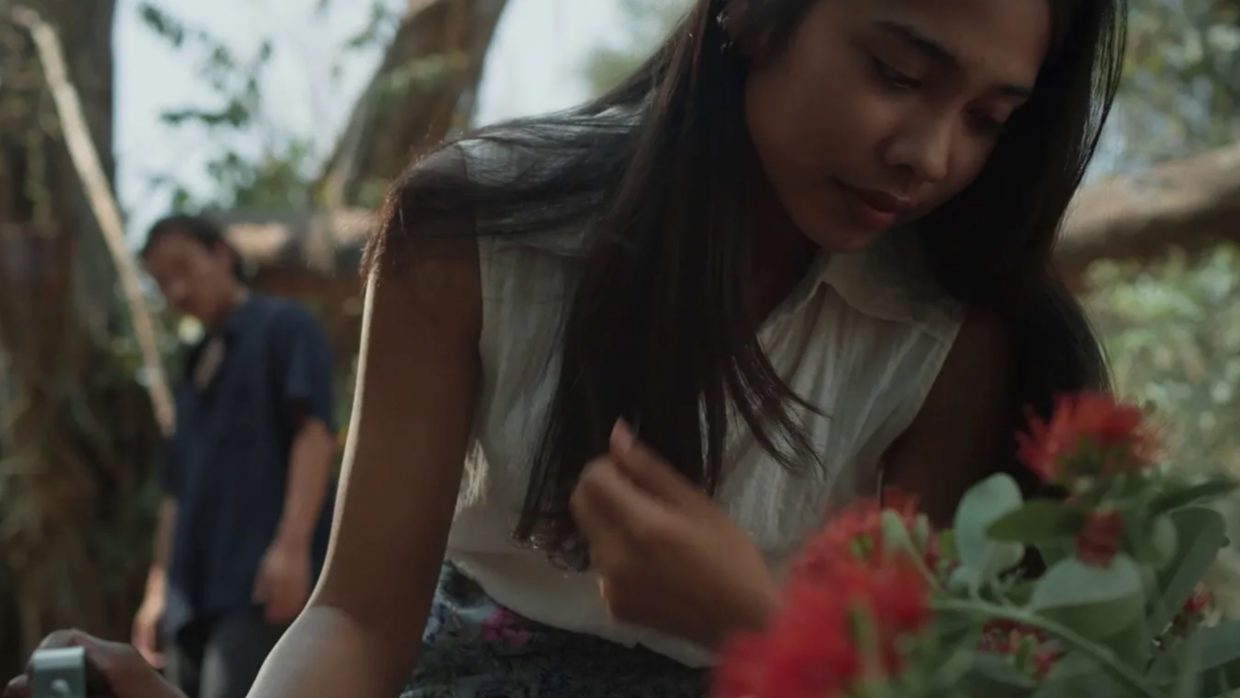 After an online-only edition in 2020 and a hybrid Golden Jubilee last year, New Directors/New Films is once again “in-person only,” a phrase whose very existence reveals how thoroughly the COVID-19 pandemic has altered industry and audience expectations. If the advisability of our “return to normal” (masks are now optional at both host venues) is questionable, more laudable is the festival’s gender equity: 21 of the 39 directors whose films are included in this year’s slate are women, although the disparity between features and shorts demonstrates the political and social obstacles to feature filmmaking that women continue to face.

Most of the short films in the slate are narrative rather than avant-garde, which is to be expected given how many feature filmmakers start there, but it’s the more experimental of the bunch that most impressed me (which reflects my personal sensibilities at least as much as it does the relative quality of the films). The two standouts–Chonchanok Thanatteepwong’s Crystallized Memory and Niranjen Raj Bhetwal’s Eternal Melody–happen to follow one another in the second of two shorts programs, and their subject matter even overlaps a little. The former follows a monk’s son as he grieves his father’s disappearance, while the latter sees a widow and her son ease the departed patriarch’s passage into the afterlife. Crystallized Memory is a marvel to look at, whether it’s the skin tones in the outdoor exteriors, the close-ups of fire, or the picaresque views of the temple. The sounds of birds and insects are audible in every scene, which–along with the vaguely supernatural plotting–might call to mind compatriot Apichatpong Weerasethakul, but the film’s best sequences, namely two that use handheld camera purposefully moving along the ground, are entirely Thanatteepwong’s own. The Eternal Melody, meanwhile, shines thanks to its ethnographic patience. It portrays a simple ritual–the two survivors light a lamp during an eclipse–but conveys its significance in its static shots, through which the characters move slowly but deliberately. The grandiose landscape shots are impressive, as is the attention to the aural details, most notably the sound of the river, that fill the mostly dialogue-free film.

The Opening Night selection, Audrey Diwan’s Golden Lion winning Happening, is an ideal entry point for discussing the features, as it shares a problem with much of the films made available to press (a sizable but far from comprehensive selection). Happening is based on Annie Ernaux’s autobiographical novel of the same name about the author’s abortion in 1963, when the procedure was illegal in France under all circumstances and heavily prosecuted. Its opening scenes announce its style as the competent but unremarkable naturalism common to arthouse films, and it quickly establishes its protagonist, Anne, as a good student. In a scene that also doubles as a clever bit of foreshadowing, Anne watches a pregnant peer who declines to make an attempt to interpret Louis Aragon’s poem “Elsa au Miroir”’ before Anne takes her own stab: “[Aragon] uses a lover’s drama to evoke a national one,” Anne begins, before further impressing the teacher with prompt responses to his probes.

Whether this scene is meant merely to demonstrate Anne’s erudition, to note the contrast between Aragon’s work about looking at a woman and Diwan’s own film by and about women or to guide the viewer’s interpretation–”this personal story of a woman fighting unjust abortion laws is also an allegory,” you might say, with varying degrees of literalness depending on what state or country you live in–it nevertheless shines a light on the film’s aesthetic limitations. It is far more literal, and asks far less of you, than “Elsa au Miroir.” The first student asked to interpret the poem cannot even muster a guess; it’s hard for a viewer of this film to be similarly oblivious to questions of intent or, per the teacher, “hidden meaning.” Happening has a couple of notable sequences, namely the single-take in which Anne undergoes an abortion, but by that point the viewer will have already determined if this is a remarkable way to normalize something that shouldn’t be seen as shameful or an exploitative and asymmetric attempt to create a discomfort paralleling Anne’s own, and nothing in the film challenges or complicates either viewpoint.

Far bolder are a pair of films from Mexico. One, Dos Estaciones, has already been amply discussed in these pages (online and also in the most recent print issue); the other, Natalia López Gallardo Robe of Gems, offers reason to pay attention from its very first shot. Over the course of a couple minutes, the sun peeks out from behind a cloud and bathes a few barren trees in light as a man with a machete emerges from the back of the frame and begins to cut weeds. We hear the buzz of insects, but also, increasingly, and just as the light permits us to see their feint reflection in the window the camera looks out from, the moans of two people having humorously mechanical sex. When the camera cuts back, the woman in the foreground stares off into the field we just saw (whose reflection we can still see) while the man moves into the middleground and, for reasons unbeknownst to us, throws a wooden chair at the ground.

If this sounds like something out of a Carlos Reygadas film, it’s worth noting that López Gallardo acted in Our Time and edited both Silent Light and Post Tenebras Lux (as well as Lisandro Alonso’s Jauja), and she has both the patience and the knack for surprise of her collaborators.

The next shot is equally impressive. The camera begins close to a group at a pool as a maid (maid who will become one of the film’s central figures) talks with an adult and a few children, but then dollies out to two other characters, whose relationship to the group is unknown but who nevertheless become the visual focus even as the conversation,now taking place just out of focus in the background continues audibly. This shot teases the film’s web of characters in a story about a missing person and the cartel whose specter hovers over every interaction. That’s no less urgent or political a story than any other in a festival, but here the politics of character relationships are doled out here through spatial relations, camera placement, and sound rather than through narrative propulsion.

The temptation I indulged in two paragraphs up, of comparing a new director to an international luminary, often risks erasing idiosyncrasies and reducing a work to something more easily understood and consumed. Sometimes, however, the film invites the comparison: Kavich Neang’s White Building was co-produced by Jia Zhangke, and its story of residents of the real-life eponymous Phnom Penh development being effectively forced out by property developers evokes Jia’s Still Life. Jia’s ‘00s work is remarkable for how acutely it understands the costs of industrialization, but it is marked primarily by uncertainty, not pessimism; White Building, by contrast, is resigned. The events it depicts forebodingly have already come to pass in real life; the building (where Neang grew up) has already been demolished and will be replaced with a 21-storey multi-use development. Neang’s protagonist can never catch a break, whether it’s with his dance crew, chasing girls, or convincing his dad to go to a hospital. Change not met with hope or even uncertainty but with disaffection: this is the new cinema of the developing world, one for those who see “development” as an entry not into the promises of a globalized world but into the particular misery that is now the West’s greatest export.

There are fewer easy comparisons, given the small footprint of its country of origin, for Pilgrims, the debut feature by Lithuanian filmmaker Laurynas Bareiša. It follows Paulius and Indra retracing the steps taken by Matas, his brother and her boyfriend, just prior to his murder. There is a political allegory here for those who want it–wartime atrocities are explicitly mentioned on one occasion–and anyone still prone to seeing everything through the lens of trauma will be similarly pleased, but Pilgrims succeeds because its disaffected aesthetic demonstrates an authorial vision that is palpable on the screen and not easily reduced to a pull-quote or viral tweet. Words like “observational” or “minimalist” are appropriate, but it’s the punctuations that come in the form of an unnerving slow zoom, unexpected pan, a flare of expressionist lighting, or a character moving across the screen to make you realize you’re looking into a mirror rather than down the hall that elevate the film above arthouse convention.

Documentaries are in short supply at New Directors/New Films, but they do account for a pair of highlights with diverging approaches to the form. Fire of Love, which has had its virtues and shortcomings analyzed by Abby Sun in these pages, is largely archival, while IDFA Best Direction winner Children of the Mist consists of footage Diễm Hà Lệ captured while living intermittently with a Hmong family beginning in 2017. The film succeeds both as character portrait and ethnographic study, perhaps because its de facto subject, bride kidnapping (a common and traditionally sanctioned but controversial practice in Hmong culture in which a man kidnaps a girl he hopes to wed), lends itself naturally to both.

Diễm initially sought to capture the carefree childhood of the film’s protagonist, Di, but the formal contrast between the ethnographic scenes of the family extracting indigo and the more personal moments of Di talking with her friends and playing with her smartphone foreshadow the conflict between tradition and modernity. Di’s mother cautions her to avoid a kidnapping, and Di herself says she won’t end up like her older sister, unhappily married after her own kidnapping, but when New Year’s arrives she seems to go along with it when it happens, only to resist the aftermath (the boy is similarly confused, admitting he did it largely because it’s a common practice).

The family conflicts that follow often see Di appeal directly to Diễm (or, conversely, see her family attempt to dissuade her from filming), making for the film’s most compelling moments. It is easy for a viewer to chastise a filmmaker for not intervening, even though, paradoxically, our understanding of the gravity of a situation is possible only because of the decision not to put down the camera, and it is to Diễm’s credit both as a filmmaker and a journalist (as she was trained) that she, first off, realizes that her camera is powerful enough to compel or dissuade certain behaviors from those in front of us, and second, asks us to consider the often contradictory attitudes and shifting views of all the people involved. A lesser documentary might attempt to maximize our sympathy. Rather than placate us with assurance that we can feel good about feeling appropriately bad, Children of the Mist challenges us to negotiate our relationship to its images.