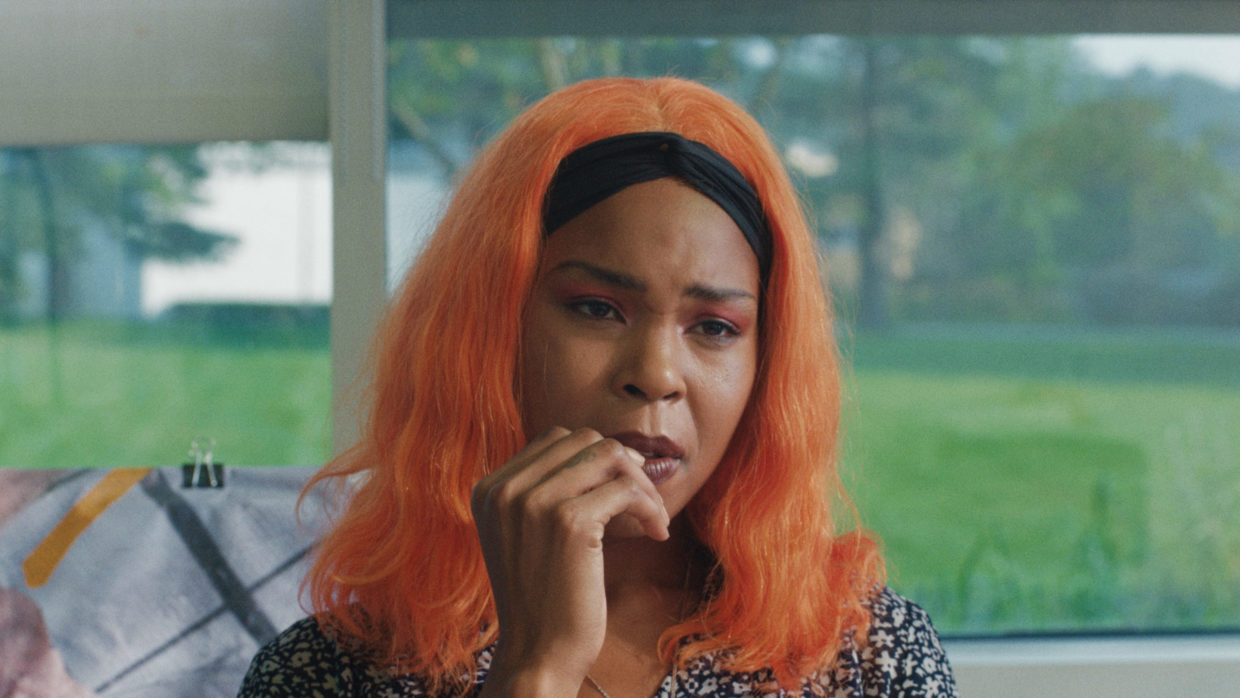 by Nelson Kim
in Directors, Festivals & Events, Interviews
on Apr 29, 2022

The 2022 edition of New Directors/New Films — the annual showcase of emerging filmmakers co-presented by Film at Lincoln Center and the Museum of Modern Art — concludes this weekend with three screenings of its closing-night film, Martine Syms’ The African Desperate. Syms is an art-world luminary whose work is in the collections of the Art Institute of Chicago, the Guggenheim, LACMA, MoMA, and the Tate, among others, and her extraordinarily varied and prolific output includes video art, installations, essays and manifestos, and a publishing press. Much of her oeuvre reflects a deep engagement with the moving image, from her 2017 feature film Incense Sweaters & Ice to her co-organizing of a 2020 symposium at Princeton University on the work of William Greaves.

The African Desperate is both a logical extension of Syms’ interest in carving out a space for contemporary explorations of Blackness in the art world, and a totally unexpected departure. It’s a comedy, first and foremost — a hilarious, candy-colored, coming-of-age comedy, compressed into 24 crazed hours in the life of Palace Bryant, a young Black artist on the cusp of graduating from her MFA program at an exceedingly white college in upstate New York. Palace, played to deadpan perfection by the visual artist Diamond Stingily, is fed up with her fly-in-the-buttermilk art-school existence and plans to skip out on the graduation-night party before heading home to Chicago. But she goes to the party anyway, setting off on a madcap, drug-fueled journey full of flirting, freakouts, and faceplants. Much satirical fun is had with the affectations of art teachers and students alike (one classmate speaks of “disrupting the flow of capital with painting”), but there’s also genuine warmth and tenderness in the film’s depictions of friendship, youthful misadventures, and the closing of a chapter in one’s life.

The following Q&A was conducted via email a few days before The African Desperate’s April 30 world premiere.

Filmmaker: You’ve been a known presence in the art world for several years. And you’ve worked with film and video within that context for some time, including making a previous feature film. But The African Desperate is a full-on movie, a smoke-a-joint-with-your-friends-and-kick-back-and-watch-it movie. Different audience, different infrastructure, different mode of address. How did this come together? And was this a transition you’d always planned or hoped to make?

Syms: The film came together quickly, in the interstitial space between COVID lockdowns and whatever world we entered after that. I knew I wanted to make a film about my experience getting my MFA. The role of Palace was written for Diamond Stingily. Vic Brooks, the incredible curator at RPI EMPAC, agreed right away to help produce it, so I knew it was possible. Rocket [Caleshu] and I wrote it in a few months, and entered production more or less immediately after. It was full-on insanity, and required stepping through the portal to another dimension, but we did it.

Filmmaker: In what ways do you see the film as an outgrowth of the work you do as a visual artist?

Syms: I want to make things that change people’s lives. Big, unforgettable, life-changing works. I want to reach broader audiences, continuing to invest in what’s possible in the context of both art and film. They offer different modes of circulation. My way of working is idiosyncratic. I’ll use all the tools I have available to develop my ideas and reach new audiences. Infinite possibilities. I want my projects to be widely viewed, especially by those who don’t generally find art to be an inclusive space. Film is a robust space for the circulation of the ideas I’m developing.

Filmmaker: Your co-screenwriter, Rocket Caleshu, is a poet. How did this collaboration develop? How did you two work together on the script? (And who is responsible for genius lines like “I’m done going to events that don’t cater to my basic human needs” and “Fuck me or you’re racist”?)

Syms: [Quoting a reply she received from Caleshu]: “Martine is very interested in the language on the page, in the screenplay as a text that stands on its own, independent of the film. This is an exciting way to work, leaving open possibilities for word play, humor, storytelling through stage direction, and for an audience beyond the cast and crew of the film. Much of our collaboration is born of a shared commitment to telling deep truths, transformation, and not giving a fuck”

Filmmaker: It’s a hangout movie – a loose, episodic story taking place within a limited time frame, and for much of that time we’re really just enjoying seeing the characters interact, without being tied down to a heavy plot. Was that how you saw the movie from the beginning, or did it evolve as you wrote?

Syms: Grad school is one weird, long daydream (nightmare?). I wanted to depict the way that the center doesn’t always hold, despite, or because of, the infrastructure of the academy that’s behind it. It’s lonely in the woods. The characters you meet along the way shape the experience. Everyone’s an archetype and totally themselves simultaneously. Palace is on a journey, we’re just along for the ride.

Filmmaker: What were some films or filmmakers that have inspired you? Which ones in particular inspired The African Desperate?

Syms: Fear and Loathing in Las Vegas was a big reference. Truly unhinged performances, weird worlds, playful camera movement, an artist on a journey to make sense of nonsense. Creative, fun, hilarious!!! Requiem for a Dream was another big reference for its visual treatment of drug culture. The photography styles of Girl 6 and Rebels of the Neon God were a big inspiration. Also everyone should watch Paprika and then ask me about the quantum field.

Filmmaker: How did you develop the visual style of the film with your DP, Daisy Zhou? I’m particularly impressed by the drug scenes – each with its own flavor and mood.

Syms: I had a very clear sense of how I wanted the film to look, and I knew Daisy, with her strong and specific visual sensibility, would make it happen with me. We spent so much time, before shooting and on set, figuring out how to get the impact we wanted from each shot, how to capture the distinct drug scene environments alongside the tense/beautiful dichotomy of upstate New York.

Filmmaker: How did you come to cast a fellow artist, Diamond Stingily, in the lead? How did her presence shape the way the film turned out?

Syms: Diamond Stingily is a longtime close collaborator of mine. We’ve worked together on a number of projects. Our collaboration is intimate and ongoing. The role was written for her, and her experience is written into the character. Palace is the heart of the film. Her subjectivity is the fulcrum of everything. Diamond’s performance holds all that.

Filmmaker: The movie is a satire that pokes a lot of fun at art-academic jargon and pretensions. But it’s clearly an inside job – made by someone who knows this world very well. And it’s not without affection for its subject. Do you see the film as being critical of the world it depicts?

Syms: The film is about incongruity and paradox and transformation. It’s specific to the art world because that’s the context I come from, but it’s universal too. It’s the story of a journey, and all hero’s journeys have to venture to the underworld.

Filmmaker: A lot of Black cultural theorists get name-checked in the dialogue: Édouard Glissant, Saidiya Hartman, Fred Moten, Sylvia Wynter. On one level, these are simply the writers that these characters would be reading. But I sense that you’re also working to make these writers’ ideas part of the texture of the film — can you say something about that?

Syms: There’s a playfulness in the repetition of the names. They become a refrain in the film, and there’s a humor in circling back to the refrain. All the best conversationalists do it. The art world has a way of turning high theory into trends, which is absurd and funny, even as there’s a recognition of their contributions baked into the attention.

Filmmaker: Will we see more films from you in the future?

Syms: Yes you will. Stay tuned…