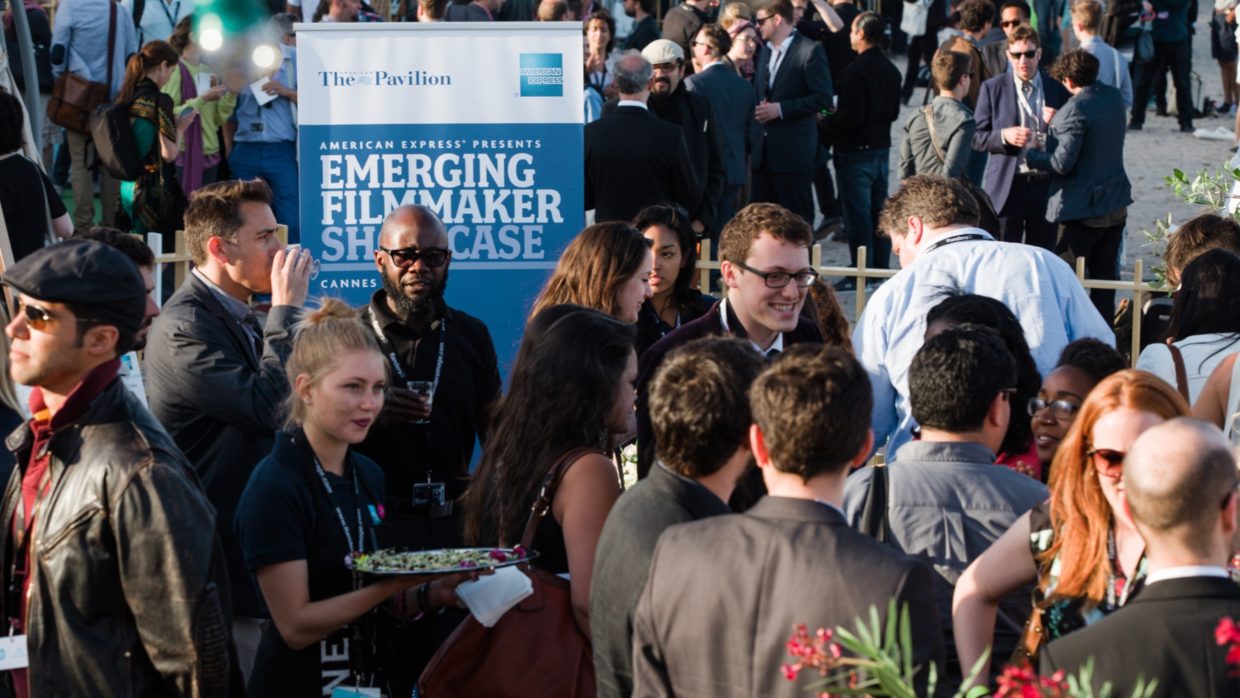 The American Pavilion announced today the 2022 program of its Emerging Filmmaker Showcase at the upcoming 2022 Cannes Film Festival. 33 films comprise this 25th anniversary edition, with the program screening at the American Pavilion along with finalist films from the 2020 and 2021 editions. All screenings with filmmakers in attendance with be accompanied by live Q&As.

“The 2022 cohort of student filmmakers and young talents brings us a richly diverse program including 24 female-identifying directors presenting 17 films, and 10 films focused on LGBTQ+ topics as well as many projects exploring the meaning of cultural identity,” said Julie Sisk, Founder and Director of The American Pavilion. “We are also thrilled to back in-person this year bringing the 2022 finalist filmmakers together with the talents from 2020 and 2021 to provide them the opportunity to screen during the 75th landmark edition of the Cannes Film Festival.”

Noisy
2020, 10:04 min., USA, Drama
Writer/Director: Cedric Hill
Producer: Cedric Hill, Pandora Scooter, Daniel Philips
Executive Producer: Dany Bouchedid
DP: Valentina Caniglia
Cast: Max Lamadrid, Gabi Faye
Sam gets on the subway to get home. He catches the eye of April. The two of them discover they have way more in common than where they’re heading. Sometimes you need a noisy place to have a quiet conversation.

Carino
2021, 3:46 min., USA, Animation/LGBTQ+, School of Visual Arts
Writer/Director: Carlos Taborda, Roshel Amuruz, Ashley Williams
In the streets of Cartagena, a young boy embarks on an adventure to find a flower for his crush and win his affection.

Imperfectly Complete
2021, 14:46 min., USA (Subtitles), Drama/Romance/LGBTQ+, University of Southern California
Writer/Director: Bruce Chiu
Producer: Victor Tsao, Chrissy Aung
Cast: Chrissy Aung, Zaw Myo Htet
Lucy has been taking care of Owen, a blind guitarist she has admired for years. When Owen is about to get his vision back, Lucy faces the struggle of whether to reveal her true identity to Owen.

Spokespeople
2020, 23:30 min., USA, Documentary, University of Southern California
Director: Ryan Mekenian
Producer: Daniel Sheahan, Stephen Tonti
Cast: Jeremy Sisto (Narration)
For Los Angeles natives living in the early 1900’s, bicycles and streetcars shared the road as our primary modes of transportation. But the arrival of the freeway effectively wiped them out. Today, a collective of cycling communities fight for protected bike lanes and road safety; determined to bring a new era of mobility justice to the city.

Message Sent
2021, 4:13 min., USA, Animation/Comedy, Cal State University Northridge
Producer/Writer/Director: Ryan C. Lopez
Cast: Ryan C. Lopez, Danielle Della Porta
When Steven struggles to make his feelings for Liza clear, his cell phone comes to life and encourages him to make the most important decision of his young adult life, to trust himself, and take a leap of faith.

Mother in the Mist
2021, 20:51 min., China, Drama, University of Southern California
Writer/Director: Kay Niuyue Zhang
Producer: Robin Zhongyu Wang, Kay Niuyue Zhang Co-Producer: Eris Zhao, Jiayun Li
Cinematographer: Jiang Du
Cast: Shen Shiyu, Wang Xiwen
Following Wuhan’s Coronavirus lockdown, a rural single mother embarks on a dangerous journey in search of her preemie newborn baby stranded in Wuhan City Hospital. Against a harsh, grim winter night, she trudges through trials and tribulations, fighting a way around checkpoints. Joining her path is a mysterious eight-year-old girl, who shares the same determination to reunite with her mother in the city. When She finally almost gets to Wuhan, we realize things are not as it seems…

Greta
2021, 7:49 min., USA, Drama/Coming of Age, Glendale High School
Writer/Director: Sofie Verweyen
Cast: Lilah Hayes, Erinn Hayes, Victoria Atkin, Jack Hayes, Maggie Hayes, Eva Langsdorff
A personal, subjective journey into the mind of Greta Thunberg, before realizing her calling as a climate activist. While struggling with mental health issues and bullying because of Asperger’s Syndrome, she also grapples with a sense of impending doom due to the climate crisis. These same struggles and fears drive her to push for change and become the person she is today.

Pho
2021, 11:51 min., USA, Drama, Orange County School of the Arts
Writer/Director: Ethan Chu
Producer: Ava Encinas
Cast: Khoi Le, Julie Tong, Antone Axten
After building a seemingly successful life, a man must come to terms with the melancholic truth that he has detached from his Vietnamese culture and subsequently his grandmother, both of which he once held a close relationship with. His grief pushes him through a journey of reflection which reveals to him the perfect recipe to restore the once lost connection.

Sydney 2078
2021, 9:36 min., Australia, Sci-Fi/Drama, Balgowlah Boys Campus
Producer/Writer/Director: Brady O’Sullivan
Cast: Gordon Carroll
A teenage boy from Sydney’s Northern Beaches, with a fascination for science fiction movies and novels has a vision during the night, leading him on an inter-dimensional endeavour into the future.