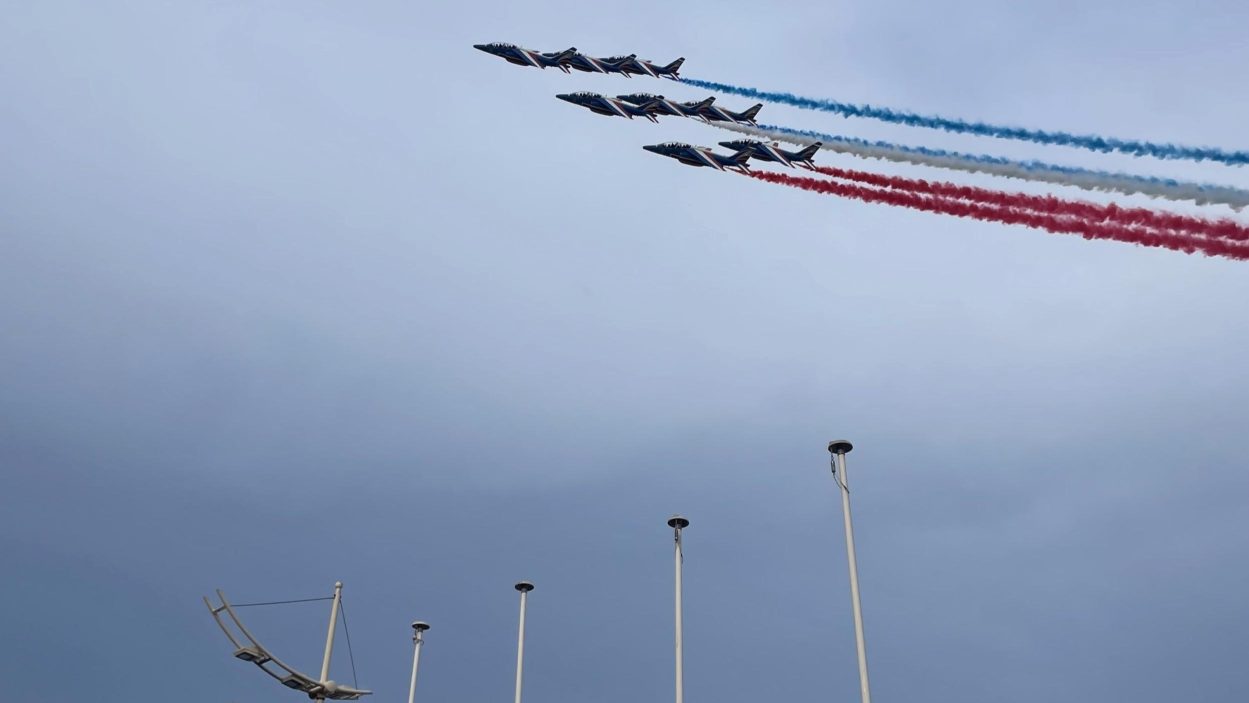 I’ve hit the fatigue section of my journey. Time is irrelevant, and I spilled several glasses of water during pitch meetings because my motor skills are suffering. I read back on my last journal, and it seems like a story from a stranger, someone much saner than I. It was probably the Top Gun: Maverick-themed military fly-by that opened this portal to another dimension. Does anyone know if the red white and blue smoke coming out of their engines were supposed to be celebrating France or the USA?

I woke up feeling weird. I only slept for four hours and then immediately had a meeting on a boat. Four aforementioned spilled waters and super productive meetings later, I come-to in a fancy dress, watching a documentary about French actor Patrick Dewaere in a theater full of very hip French college students. We all love Patrick Dewaere and when the film ends, everyone is crying.

But no time for tears — I must immediately rush to the one big fancy premiere I snagged a ticket to where I do my best to convince the dress-code police that my fancy dress is in fact fancy enough to merit my entry. It’s a close one, and I am encouraged to go home and find something fancier. (My dress is nice but it’s not a bejeweled strapless gown with a train.) But a little luck and generosity gets me on the red carpet for Jerzy Skolimowski’s new film EO, thank goodness! This was the film I was most looking forward to, and I wasn’t going to let a dress code interpretation issue stand between me and that donkey.

I really liked EO. And so did the audience. Either that or they just really love applauding. (Both feel equally likely.) After the credits, the film received an extremely merited, warm reception during which Mr. Skolimowski honored his inspiration by holding up a photograph of Robert Bresson and Balthazar, the donkey in Au Hasard Balthazar, for the full 11 minute standing ovation.

It only gets more blurry from here. I saw two very cool films, but I’m starting to lose track of my own taste. It’s been very hot and everyone is sweating. The Gotham/Cannes Producer Network fellows all got together for dinner at a restaurant that served little shots of vodka between courses. As you can imagine, this led to a late night. But that didn’t slow down the ever-turning gears of industry. Although the crowd at my third party of the night was crosseyed with fatigue, dehydration and drunkenness, everywhere I looked people were networking and discussing their upcoming projects, dropping names and talking each other up. This is a crowd that does not quit. It’s very possible several major deals were made in the courtyard of a bar at 3:00 AM Friday night, but I was loopy so I wouldn’t have noticed.