“This is a Transgressive Force that Springs from the Imagination”: Rodrigo Reyes on his Tribeca-Premiering Doc Sansón and Me 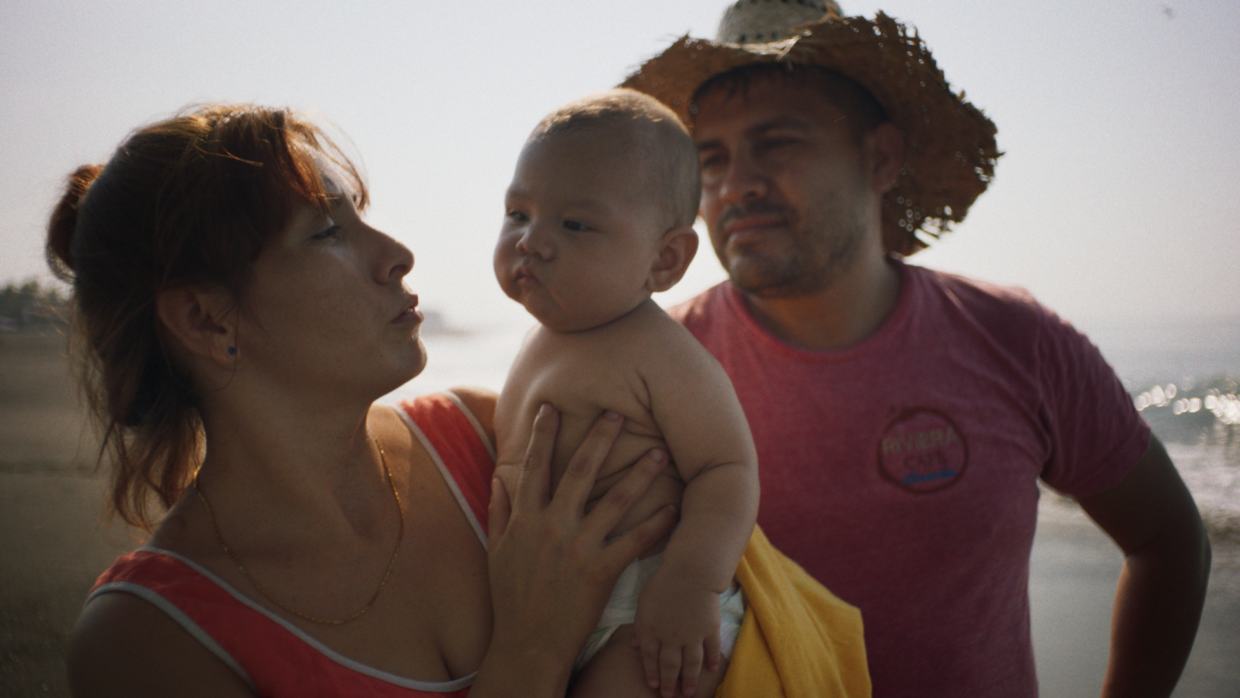 by Lauren Wissot
in Directors, Interviews
on Jun 12, 2022

The latest from “25 New Faces” alum Rodrigo Reyes, who we last spoke with for 2020’s Tribeca-selected 499, might also be his most personal and potentially fraught. The journey to Sansón and Me began a decade ago, when the Mexican-American filmmaker’s day job as a Spanish court interpreter in rural California took a turn for the tragically unexpected. Sansón Noe Andrade was a “quiet and super-polite” 19-year-old who was behind the wheel when his (even younger) brother-in-law decided to open fire on a rival from the passenger side of Sansón’s car. As a result, both teens were charged with murder. And Sansón, perhaps unaware that the US criminal justice system runs on plea deals, decided to take his chances at trial — a decision, perhaps inevitably, that led to his being found guilty and sentenced to life without parole. Cut to Sansón thanking his interpreter with a handshake before being cuffed and whisked away by bailiffs, an image that’s haunted the helpless Reyes ever since.

To learn how this chance encounter ultimately led to a sprawling cinematic collaboration between Reyes, Sansón, and the incarcerated man’s struggling family members still down in small town Mexico — as well as tricky ethical landmines  — Filmmaker reached out to the director just prior to the doc’s June 12 world premiere in the Viewpoints section of this year’s Tribeca Festival.

Filmmaker: I guess I should start by admitting I really wrestled with the ethical implications of this film, at least for the first half. That said, I do appreciate that you likewise struggled and were even willing to be honest about your own missteps as the doc progressed. Watching Sansón’s poor (in every sense of the word) family members just made me wonder what “consent” to participate in a doc even means when a loved one is behind bars and thinks getting his story out can only help him, regardless of your being upfront that it likely won’t. Why not just hire actors across the board rather than intrude on these relatives, so vulnerable to pressure and dealing with their own personal problems?

Reyes: Absolutely, making Sansón and Me was painful — for the family, for me, and most of all for Sansón himself. Yet the film was crafted with the compassion of everyone involved, working in active collaboration. The very first audience to see the finished film was, in fact, Sansón’s own family. My producer and I traveled to his hometown of Tecomán on the Pacific coast for a private outdoor screening. The conversation that followed was one of the most beautiful and thoughtful I have ever experienced in filmmaking. Sansón’s truth resonated deeply with his loved ones, both in its sorrow and its joy. They did not regret being a part of the film; rather they are proud of the fact that, in spite of all the obstacles working to build a wall of silence around him, Sansón broke through.

Why do we make documentaries? Should they challenge us to step into the world of others, even if we leave without easy answers? Or should they comfort us and make us feel that everything will be okay? The film is transparent about these questions, and I wish more directors were willing to come forward with their own experiences. Documentarians are all too often scared to bring us into their relationship with real life. We are pressured by the marketplace to be morally clean, urged to pick safe stories that comfort audiences with clean resolutions. All too often this means stories like Sansón’s end up being ignored and erased.

The assumption that folks cannot give consent is dangerous because it assumes that somehow we are the experts just because we are lucky enough to be directing a film. I believe that real people have agency over their lives and can make decisions about their representation and that we as filmmakers must be willing to be vulnerable around this relationship. We ought to give back the power to real people and not be afraid of relinquishing our authority.

Choosing “professional” actors would have been a safe choice along a slippery slope; one that risks falling into the tropes of true crime or even worse — the paternalistic narrative of the model minority. What would have stopped me from polishing the conflicts in the film, or altering the story to craft a portrait of a faultless hero? What about editing out disagreements along the way? If we have the option to clean up the roughness, why not pick an easier story? Why bother with Sansón in the first place? After all, he makes Latinos look bad, right?

While the collaboration with Sansón and his family was full of ups and downs, it kept the film grounded in the truth of his history and his hometown. As Sansón likes to say, “All opinions are valid. But please remember that this is my story.” The truth is that Sansón’s experience is deeply uncomfortable. Yet this is exactly why his life is so necessary and worthy of celebration. I can only hope that audiences are brave enough to open their hearts to his story.

Filmmaker: Your transparency about the filmmaking process is truly on display here, as we’re privy to everything from Sansón’s family engaged in artistic exercises prior to the shoot to your sit-down conversations with the actor playing Sansón. Why was it important for you to bring this behind-the-scenes aspect so prominently to the fore?

Reyes: True justice is born from sincerity, and that means we should ask not just how something happened but why. The same is true in film. It can be very exciting to witness the process of how something is made, but things change when we begin to ask why. This is the fifth wall that exists beyond the fourth. Why are we here?

Documentaries have a unique relationship with reality; unlike fiction, we are forced to answer for our pact with the world, for our bond with the people featured in our stories. To me, this meant that if I wanted to share the truth of my friendship with Sansón I had to bring the audience into our collaboration.

Once again, why do we make documentary films? The answer is simple yet vast: because we are connected to something in the world that we cannot let go of, something that resonates deeply within us, and that we hope will speak to others with the same poetry.

Filmmaker: This is also a highly personal doc, as you’d been haunted by Sansón’s fate ever since you served as his translator at his murder trial. So did you think that the power of cinema — the reclaiming of story — might rectify the helplessness you both felt at the time, perhaps even serve to heal you both? If so, has the belief been borne out?

Reyes: Anyone who knows a person who is incarcerated and cares deeply for them understands the feeling of helplessness and deep spiritual anguish that exists in that space. At first these feelings take over and are almost unbearable. As time goes by you begin to see a shift, from anxiety and anger into a search for joy.

While the film cannot undo his case, it has given Sansón power over his story. This is a transgressive force that springs from the imagination. It’s part of the path towards healing. I feel very lucky to have walked alongside him on his journey to take back his humanity from a system that denied him the most basic of human traits: his voice.

Filmmaker: What were some of the lessons you learned through this long intense experience? What do you most wish you’d done differently?

Reyes: As I look back at the film after 10 years of work, and especially after having the honor of sharing it with his family, I recognize that I entered into this project with naiveté, spurred on by the idealistic faith that two human beings, brought into each other’s lives by chance, can become connected and then build something together.

I am glad that I did not overthink it, and that I was naive enough to follow my heart. Not the market, not my fears — just my feelings. This has made all the difference because I was led forward by love, without judgment, and Sansón resonated with that and responded with his own vulnerability. This is the foundation of our collaboration.

Since I began this project I’ve gone on to direct other works and have become more experienced in cinema. The idealism of a decade ago is gone now, giving way to a more seasoned view of the world. Yet when I look back I can honestly say I have no regrets. Friendships and filmmaking are messy, just like life, and I am deeply grateful that Sansón has stood by me during all this time.

Filmmaker: How do all the characters feel about the film, especially now that it’s about to reach international audiences? Have they expressed any particular hopes? Have you had to tamp down expectations?

Reyes: I’ll go back to the conversations I had with the family, during that iconic summer night screening in Tecomán. We talked about the beauty of the film’s images, and how idyllic Sansón’s childhood was in spite of all the issues he faced. He was born in a place bursting with color and light. Sansón tells his story in such a way that he combines sorrow and joy with the harmony of poetry.

Sansón continues to fight his case and has hopes to one day be free. Yet I’ve always been clear to Sansón and his family that this film was not going to undo his sentence, but that it could offer a window into a different kind of freedom. By speaking up through cinema and making his voice heard Sansón is transforming the systems that seek to hold him down. This is what restorative justice is all about.