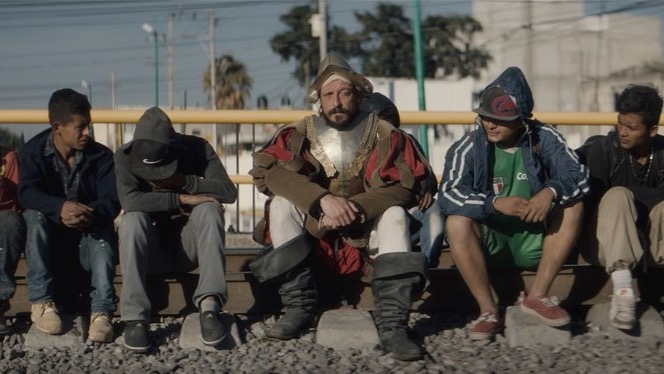 by Lauren Wissot
in Directors, Interviews
on Apr 25, 2020

499, the fourth feature film from “25 New Face” alum Rodrigo Reyes, is an epic, enchanting road movie that travels seamlessly through time (a 500-year-old journey reenacted in the present day) and space (across Mexico, from coastal Veracruz to the nation’s capital — or what used to be called Tenochtitlán back when the Aztecs claimed it as their own). Cemented by Eduardo San Juan Breña’s gripping performance as a Spanish conquistador who finds himself washed up into the future and onto modern day Mexico’s shores, the film recreates the path taken by Hernán Cortez in his 1621 quest to conquer the new land — but with a twist. In lieu of Aztec warriors, the ghostly conquistador encounters the victims and perpetrators held hostage by the country’s ceaseless drug wars — both sides bound by a legacy of Spanish colonialism that reverberates to this very day.

Filmmaker took the opportunity to catch up with the Mexico-born American director as 499 was making its (digital) debuts in the Official Documentary Competition at the Tribeca Film Festival, and in the International Spectrum Competition at Hot Docs.

Filmmaker: So how did this film originate?

Reyes: I fell in love with history thanks to my father. He let me tag along with his students on visits to amazing archeological sites and spaces like the National Museum of Anthropology. I discovered, in the best sense of the word, a vast universe of indigenous cultures and civilizations. And my father always underscored a basic concept — history matters because it is still here, like a palimpsest, existing below the surface.

Years later, with the approach of the 500th anniversary of Cortez conquering the Aztec capital of Tenochtitlán, I started to fantasize about a film. How can we talk about this “conquest” today — not through a didactic or journalistic lens, but from the language of cinema? As I turned over this challenge, I saw clear links between the wave of violence sweeping Mexico today and the horrors of the Spanish conquest.

Colonialism has endured in Mexico. Why? Because the core exploitation continues, like a grinding gear of some strange machine. The tools have changed form, but their essence remains the same. The nightmare of violence in Mexico is at an epic scale. In my country, just to state a handful of facts, ten women are murdered each day with almost complete impunity. Sixty thousand people have been disappeared by organized crime, often in collusion with the government. The nightmare of the present calls for imagination. I understood that I needed to find a creative solution to come to grips with this madness.

With the help of my producer Inti Cordera we came upon the idea of a time-traveling conquistador confronting modern Mexicans. The idea made complete sense right away because it is essentially true. This ghost is still here. We are just bringing him to life through the power of cinema.

Filmmaker: The doc is infused with an almost intoxicating magical realism. Are there specific literary or cinematic works that influenced your filmmaking?

Reyes: I absolutely love cinema and literature. These are my guiding compasses when I am trying to make a film. I am grateful that my process for 499 included connecting to a lot of both. The most critical and enjoyable part of the process was tapping into primary sources from the era.

Regardless of where we stand and how we interpret the Conquest, the events of that time are incredibly epic and infused with terrible wonder and amazement. It’s right there, in the testimonies left behind by the Spanish soldiers and the Mexica who survived. It was an absolutely mind-bending experience. In fact, many of the conquistadors fell in love with the new world; and for most, including Cortez himself, that promise of freedom and wealth was dashed to pieces, leading to a tragic, melancholy tone. This really struck me as something I wanted to saturate into the film. I understood that the character of the Conquistador had to go on this journey.

On the other hand, it was crucial to include the perspective of the conquered Aztecs. There are precious few direct testimonies from the era, many of them gathered in a famous text called the Florentine Codex, which is an amazing compendium of the Mexica understanding of the universe and how it all came crashing down in the span of a few years. It was also critical to reach out to scholars and writers who have tackled this era, from luminaries like Octavio Paz, Fernando Benítez, and Eduardo Galeano, to others that I had the privilege of talking to, like José Rabasa and Walter Mignolo, Camila Townsend and Matthew Restall.

Visually, we tapped into the widescreen format, which is usually reserved for Hollywood, big budget epics. My friend and cinematographer, Alejandro “Jano” Mejía, advocated strongly for this approach because he understood that we needed to create a communal space for reality and fiction to coexist on a single canvas. Jano knew that we could take the anamorphic tone and create an epic out of the landscapes and people in Mexico. We worked only with available light, leaning into the look, and taking inspiration from the great Spanish masters Velásquez and Goya for composition and color tones. And at the same time, we embraced the vibrant presence of color in Mexico, which comes from a deep tradition exemplified by the ancient muralists who beautified cities and temples hundreds of years ago.

If I had to cite specific filmmakers, I would say that I often thought of Kurosawa in Kagemusha and Ran, as well as Stanley Kubrick’s Barry Lyndon and Buñuel’s Simón of the Desert and The Milky Way. These are directors that reach a poetic distance from their stories, so they force us to constantly think and wrestle with it, instead of simply being carried away.

Filmmaker: Your lead actor Eduardo San Juan Breña is riveting throughout, even though he barely speaks onscreen. Where did you find him – and how did you two collaborate to elicit such a strong performance?

Reyes: To be frank, I found Eduardo in a last-minute rush after we had another candidate cancel. It was a hectic, risky search that was really a blessing in the end. Nobody could have played the role with as much commitment and an open heart.

We had no budget to travel for casting, so everything was done over video chats, on a hunch. Neither one of us knew what to expect. On the night I picked up Eduardo at the Mexico City airport, he arrived with incredibly long fingernails which I questioned him about. He calmly explained that nobody cut their nails in the 16th century. Of course! That’s when I knew that we would be alright.

The shoot was a tough, brutal journey in a single production van with little certainty everyday. Eduardo was always there, engaging with the landscape, discussing and retouching the script with me, and – most importantly – always available to bond with the real people featured in the film. He was there when I pitched the concept to them and was present at each and every interview. This helped build trust with the real people and infused the character with the truth of their testimonies – which gave him a rich inner life that Eduardo’s huge talent projects onto the screen.

Filmmaker: From cinematography to sound design this epic road movie is so elegantly composed — which also made me wonder what the budget was like. I think you had support from the Mexican Film Institute, as well as from Sundance and Tribeca, but was it difficult to raise enough financing?

Reyes: We had a tough time financing the film because it is so different. There were few references to point out, and many doubts about the concept. Would this gamble really work?

In my experience, the only way to get past folks not getting it is to take a risk. The first shoot was in fact entirely self-financed by me and producers Inti Cordera and Andrew Houchens, with help from Su Kim. I had won a Guggenheim years ago, and still had some money saved that was meant for my own personal expenses, but I could not resist the temptation. I knew that if I made the film happen, if it became real, it would find its own momentum. And that’s exactly what happened once we could show our footage.

Of course, the production was the very definition of a shoestring, bare-bones shoot. But I was lucky, because every single person on that road trip was passionate about the project and brought all their grit to it. Their spirit made up for the lack of the money in a huge way.

Filmmaker: Some of the people the Conquistador encounters on his journey are fairly shady characters. Did you ever feel in danger during production? Did you have to take any precautions?

Reyes: We had to implement a rigorous security protocol — coordinating with local partners, several amazing fixers, and even using tracking apps on our phones. We had to be on our toes and fully aware of our surroundings all the time.

Perhaps the most critical choice was to make sure we did not appear to be journalists or news media. We did not want to be confused with any kind of investigative activity because, tragically, Mexico remains one of the most dangerous countries in which to be a journalist. And the vast majority of attacks happen in rural areas, like the ones we were visiting.

Happily, when folks saw the Conquistador in his outfit all suspicion quickly subsided, and the film was interpreted as something fun and nonthreatening.