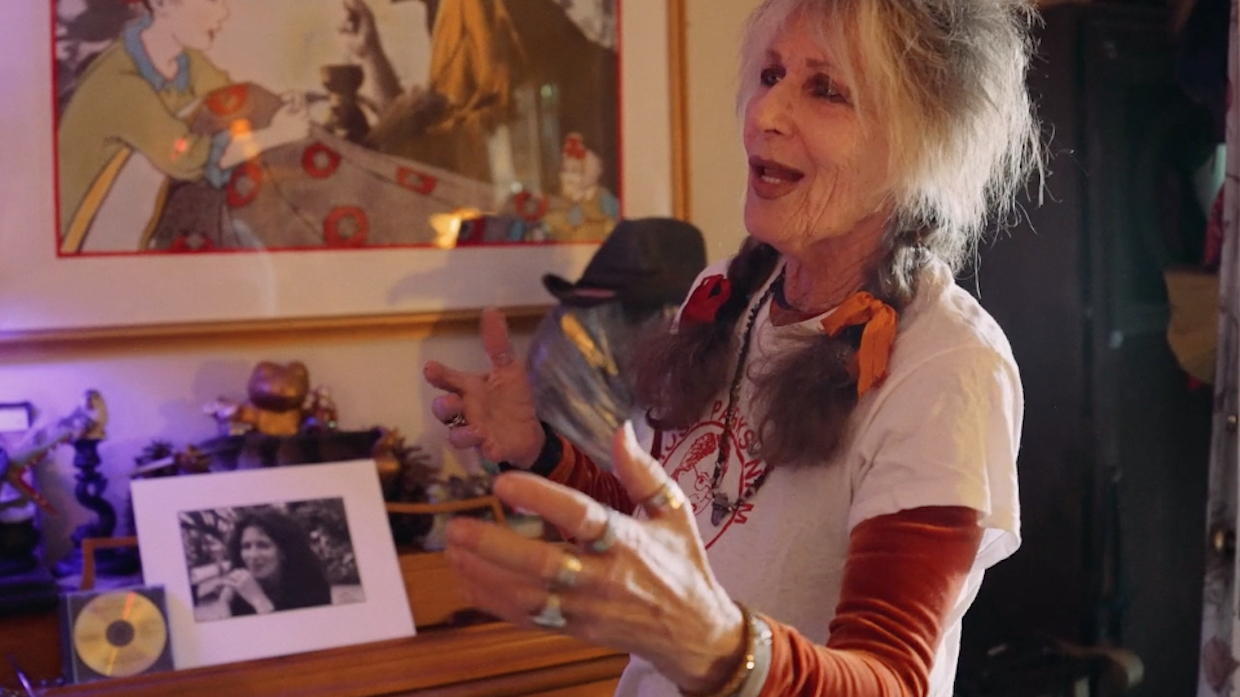 by Natalia Keogan
in Director Interviews
on Jul 22, 2022

Filmmakers Silas Howard and Naz Riahi focus on an under-appreciated local musician in their documentary short Madelynn Von Ritz Is Almost Famous, which they co-directed. The titular subject, who performs under the unassuming moniker Lynn Castle, once had a single chart on the U.S. Top 100 in 1967. The psychedelic-twinged song, “Lady Barber,” detailed the exploits of the singer/songwriter’s day job working as a hairdresser for some of Los Angeles’ most celebrated musicians of the era (yes, Jim Morrison among them).

Now 83, Von Ritz still has plenty of creative kick left in her, even if the critical recognition for her efforts never quite manifested. With friend and DP Daniel McCoy, Howard and Riahi shot the intimate, 18-minute portrait of the artist in her superbly decorated Los Angeles home during a few golden hours on a single afternoon. The film feels like a warm interaction with an extremely cool (and sagely wise) relative, friend or neighbor—a pleasant conversation on a sun-soaked afternoon, deeply familiar yet always intriguing.

Filmmaker asked Riahi and Howard to respond to a few questions via email ahead of the premiere of Madelynn Von Ritz Is Almost Famous at Outfest this Saturday. The short screens in conjunction with Howard’s directorial debut, By Hook or by Crook, which is celebrating its 20th anniversary.

Filmmaker: How did you both come to collaborate together?

Riahi: When Silas and I met, we knew that we wanted to work together as creative collaborators. We both really respect each other’s work and turn to each other for trusted feedback, and this was a natural progression. We had no idea what we’d work on together or how, but we had a lot of ideas we were throwing around. Then, on a flight from NYC to LA, Silas said to me, “We have a week of free time in LA. Why don’t we make a film?” We’re both very much doers and never think of how difficult something will be. We don’t usually focus on the challenges, we just put our heads down and work. The next day, I told him about Madelynn and two days later we were at her house, with our friend Daniel McCoy, shooting.

Howard: Naz and I are kindred spirits around what we’re drawn towards and the kind of stories we want to tell. So, we always knew we wanted to make work together, and this project really drew us in through the world Madelynn had built around her. We knew we wanted to be a part of that. It was a natural first collaboration.

Filmmaker: What drew you to Madelynn Von Ritz as a subject, and what felt crucial for you to highlight about her life and career in the documentary?

Riahi: Madelynn is an extraordinary human, a radical woman who has lived many lives and is an exceptionally talented musician. When I first heard her EP, which had been unreleased for 50 years, I couldn’t believe she wasn’t hugely famous. The sound is so singular, the writing powerful and resonant—it really surprised me. But then, I know how hard it is for one’s art to make it into the mainstream, especially for women, and especially for women of her generation. As I got to know Madelynn and her boisterous personality, she told me some of her story, how she kept getting up from the falls and never compromised herself and her talent. For us, it felt vital to tell her story, not just because of how interesting it is, but also because our culture rarely portrays as vibrant or celebrates older women, especially if they’re not famous. Her story is important and so is her resilience and her everlasting hope. It certainly inspired us as artists, and we knew it would inspire and move anyone who watched the film, as well. At one point in the doc she says, “If you think it’s hard to do what you love, imagine not doing it. It’ll make you sick.” Everyone, whether they’re an artist or not, needs to hear that.

Howard: Madelynn is an unstoppable force, and I really gravitate toward people and stories of perseverance. Our world doesn’t make life easy for most people, most artists and especially someone like Madelynn who defied convention. There are so many ways that the world tells us to give up and not to try. And yet Madelynn dares to be who she is, which includes wanting to be seen and heard. She’s not pretending otherwise or making herself small.

Filmmaker: How long did the shoot take, and how did you prepare for it?

Riahi: Like Madelynn, we are both “hope springs eternal” types of artists. When we decided to make the film, we fully embraced the limitations of not having a crew, much time or a budget. The film industry moves so slowly that it can be frustrating for people who just want to create work and put it into the world, so we were excited about the opportunity to make something for ourselves with a sense of urgency. Of course, we would never compromise quality—that was a given. By the time we decided to make this film, I had already had many conversations with Madelynn about her life. To prepare for the shoot, we both dug into the few interviews with her that are available and listened to her music, then we just went to her house with our friend Daniel McCoy and talked to her for half a day. It was a wonderful, exhilarating experience. It really felt like a gift to be there, making this film.

Filmmaker: With all of the fascinating objects in Madelynn’s home—from her furniture to her various tchotchkes to her instruments and music collection—how did you discern what was worth capturing and juxtaposing alongside your subject?

Riahi: Madelynn’s house is a treasure trove; it’s both an incarnation of her personality and her story, and a character in its own right. We were so excited to film there. My other shorts Sincerely, Erik and Andros in the City (both narrative) were shot in un-altered locations, meaning the place where we shot was our set, as it was. And Madelynn’s home is a set, as well. We went pretty nuts capturing all the glorious objects in her home. It’s remarkable how beautifully put together everything is and how everything, from a light under the sink to a knife board below a portrait, is placed with intentionality. Ultimately, we didn’t use a lot of b-roll or include the majority of what was there or captured on film, because it was important to us to center Madelynn in the frame, and to let her take up space as she told her story. But, we did manage to frame her, occasionally, through her objects, which in each case, told another layer of the story.

Howard: People show you who they are by what they care about. She gives us her point of view, between the objects and the mixed color temperatures and the light coming in. To me, her space and her things are inseparable. So, while we centered her in the frame, her objects are also very much a piece of that tapestry.

Filmmaker: I know that Silas was in the San Francisco-based queer punk band Tribe 8 during the early ‘90s. Naz, do you have any personal connection to musical expression, even if it doesn’t necessarily have to do with making music yourself?

Riahi: Let me tell you, if I had any talent, even a minuscule amount of talent for music, I’d have a band and be on stage every night of my life. Unfortunately, I don’t. However, music has been a major influence on my life. First, it was an act of transgression. I grew up in Iran where most music, especially Western music, was illegalunder the Islamic Republic. The tapes we had were literally contraband, and I knew that from a very young age listening to my parents’ collection of Iranian and Western songs—and getting a zillion-times-copied tape by people like Michael Jackson from my best childhood friend. When I immigrated to the US at age ten, I began to learn the language through playing songs over and over (as well as film and TV) and to understand the culture of this country in part by watching MTV (which my mother hated). Finally, I became a teenage feminist by discovering femme queer musicians like Ani Difranco. The role that music plays in my life is nothing short of almost everything.