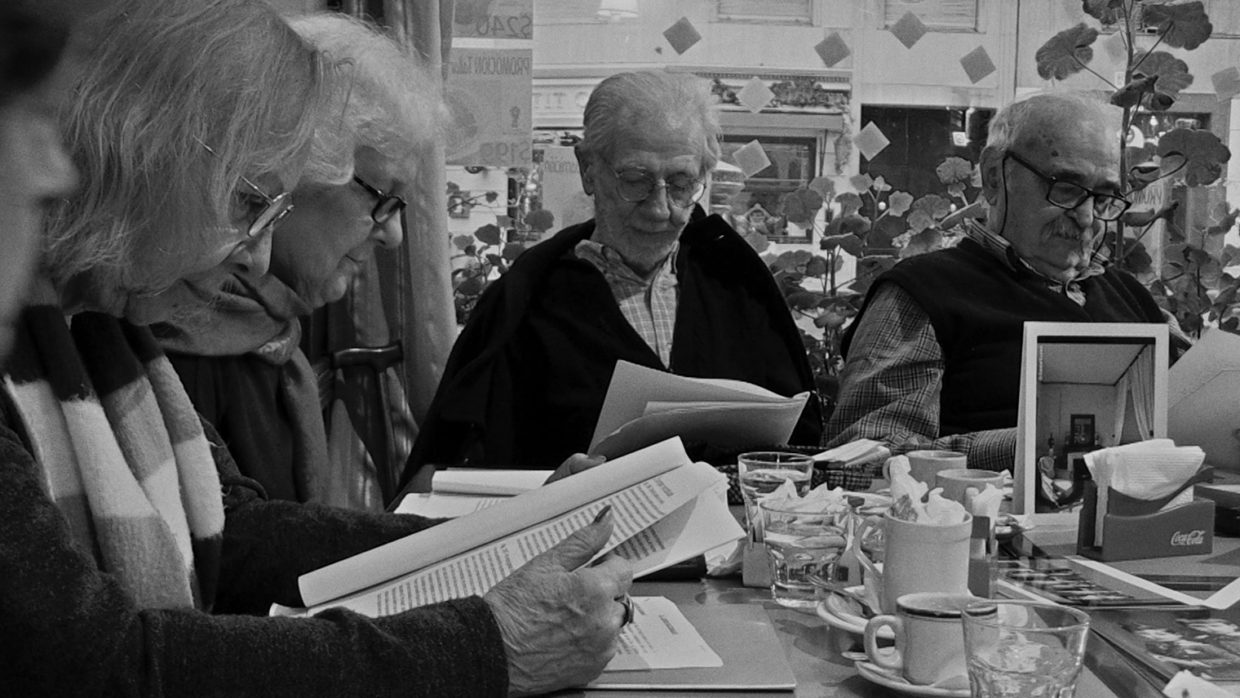 by Lauren Wissot
in Directors, Interviews
on Aug 11, 2022

María Álvarez’s 2020 doc Le temps perdu (premiering theatrically on these shores at NYC’s Film Forum August 12th) is the second film in an exquisite trilogy, beginning with 2017’s Las cinéphilas and ending just last year with the IDFA debut of Las cercanas. All three docs are poetic meditations on the intersection of art, aging and memory, similarly focused on vibrant geriatric characters whose connections to cinema, literature and music (in ascending part order) are as profound as life itself.

In the case of Le temps perdu reading becomes, in the apt description of one enthusiastic gent, “a creative act” — and an epic one at that. For two decades a band of book-loving — specifically one book, In Search of Lost Time — retirees have met up in a Buenos Aires bistro to read aloud from Marcel Proust’s 3,000-page, seven-volume masterwork. In their meetings they dissect, decipher (Is art an “extension” of life, dependent on it, or can it transcend it?) and find meaning within evocative similes, such as to control the body is like “trying to talk to an octopus.” The latter is a sentiment understood every bit as viscerally by a 21st-century elderly lady recovering from a hip replacement as it did for its turn-of-the-20th-century gay male author.

A devoted member of the greying literati describes the sudden sensation of being in Paris while simply waiting to cross the street, noting how wonderful it is to “travel for free.” A man ponders Proust’s scrapping of satisfaction in favor of the “extinction of desire”; while a female reader embraces the author’s “self substitution” as her own experience of changing over the years. And throughout decades of effusive discussion and respectful quarreling at least one consensus comes to the fore: Memories multiply a person after they’re long gone. Which could perhaps explain our own modern entrancement with the moving image as well.

So to learn all about the multi-year journey from long book to big screen Filmmaker reached out to the acclaimed Argentinean director the week prior to her doc’s US debut tomorrow at New York’s Film Forum.

Filmmaker: So how did you first encounter this (one) book club?

Álvarez: Norma, one of the main characters in my first film Las cinéphilas, which portrays retired women who go to the movies every day, was a part of this reading group. Although initially I didn’t think the group would fit in that film, we went with Norma to shoot one of their meetings anyway. It was really only later, in the editing, that I realized that the themes the group delved into — Proust’s themes — had a lot to do with the implicit themes in Las cinéphilas. So in that first part of the trilogy we chose to include two scenes of the reading group in the final cut.

From there I decided that I wanted to continue filming the meetings. Really I just wanted to continue participating in the group, and my way of being there was to film them. I wasn’t even sure I could make a film; but when I started reading In Search of Lost Time myself, I felt that the novel and what I saw through the camera connected in a very poetic way.

Filmmaker: Were all the participants open to being filmed?

Álvarez: Yes, all were open to being filmed. They were so absorbed in the reading that they forgot that we were there. It was a shoot without lights, without a sound person. We were just two people with handheld cameras who moved around them, like flies. They were just completely immersed in literature.

Filmmaker: I actually caught the final film of your trilogy Las cercanas at last year’s IDFA, which like Le temps perdu works as a standalone (and is equally poignant and poetic). However that doc, while also dealing with aging, art and memory within one tight setting, is much more of an intense character study. Which made me wonder if Le temps perdu posed any particular challenges that the other two did not.

Álvarez: Le temps perdu was a titanic editing task. The arc of Proust’s giant novel had to be reduced to something like 0.1%, which had to work as a unit of meaning. That is to say, I had to select certain themes and characters, leaving a lot out – almost everything. It was as if I were making a hyper-reduction of the novel, looking for the essence of the perfume. That was not easy to do.

The very first cut lasted about 25 hours – all shot in the same place with the same kinds of shots. At the same time I had to balance this reduction of the novel with the group’s comments on the book, and on their own lives. In addition to this, I wanted to generate a “micro-world” inside the cafe, finding the universe in the details, like Proust does.

It was a challenge also to trace each character in the group so that there was a balance between them, generating a group portrait. It was a very meticulous editing job, in which a shot might have been filmed in 2017 and its reverse shot in 2019. I believe the editing of Le temps perdu is the greatest creative and intellectual challenge I have ever faced.

Filmmaker: I’m also hoping you can let us in on the thinking behind the cinematography. In addition to choosing to shoot black and white, you tend to stay a respectfully nonintrusive distance from your characters. (Closeups seem highly calculated; the sum of the characters more important than any one individual.)

Álvarez: There are several reasons for the black and white image. Aesthetically, I wanted to give the film a timeless feeling. But I also needed to unify the light of the different seasons of the year in which the meetings took place, and the colors of the character’s wardrobe, in order to have more freedom in the editing. And there were also other issues, such as needing to neutralize the Coca-Cola signs that suddenly appeared all over the bar one day.

My intention was for the viewer to feel like one of the group, for her or him to be sitting at the cafe table for almost as long as the real meetings last. We were actually quite close to the readers with the camera; the movie is mostly close-ups. In his novel Proust speaks a lot about the change of faces in old age, about wrinkles. He writes about old faces as if they were a kind of mask. He perceives the old age of others but cannot perceive his own. And he points a telescope on his characters to describe them in detail. This is also a search for the film, which is mostly shot with zoom lenses. The handheld camera really allowed us to move very quickly from character to character, and it gives the film a breadth that, in its imperfection, I feel makes it very human.

Filmmaker: Dealing with a French text presented in Spanish to English audiences seems a bit daunting. Could you maybe talk a bit about the subtitles we’re reading? Were any new translations created from the passages read aloud in Spanish?

Álvarez: Once I finished the very difficult editing of the film I went into a crisis. We had the cut at a reasonable length, what I felt was a well-paced movie, but when I started to think about subtitling it I feared the documentary might not work with subtitles. It was just too much text — not only Proust’s but also all the dialogues between the characters. They all talked a lot at the same time. Tirso (Diaz-Jares Rueda, my partner, producer and cinematographer on all my films) and I had already subtitled Las cinéphilas, so when we found ourselves facing this difficulty with Le temps perdu it was quite obvious that this film also had to be subtitled by us. Who else was going to decide who to “listen to” and when?

So we concentrated on simplifying and abbreviating many phrases and concepts to make them more digestible for the viewer – to make them easier to read – so that the subtitles could keep up with the rhythm of the film. (I hope Proust forgives me!) Then in the final stage we had the subtitles supervised by our very sensitive English translator, Cecilia Madanes.

Filmmaker: Finally, I’m quite curious to hear how your experience in the fiction realm, especially in theater, informs your nonfiction work.

Álvarez: Contrary to equating the process of fiction with that of documentary, I actually feel that they are very different processes. Almost opposite. But I think that my gaze towards reality, in my documentaries — what I find in what I choose to portray — seeks to explore the same themes that I’m interested in delving into in fiction. Regardless, I will always look for emotions.