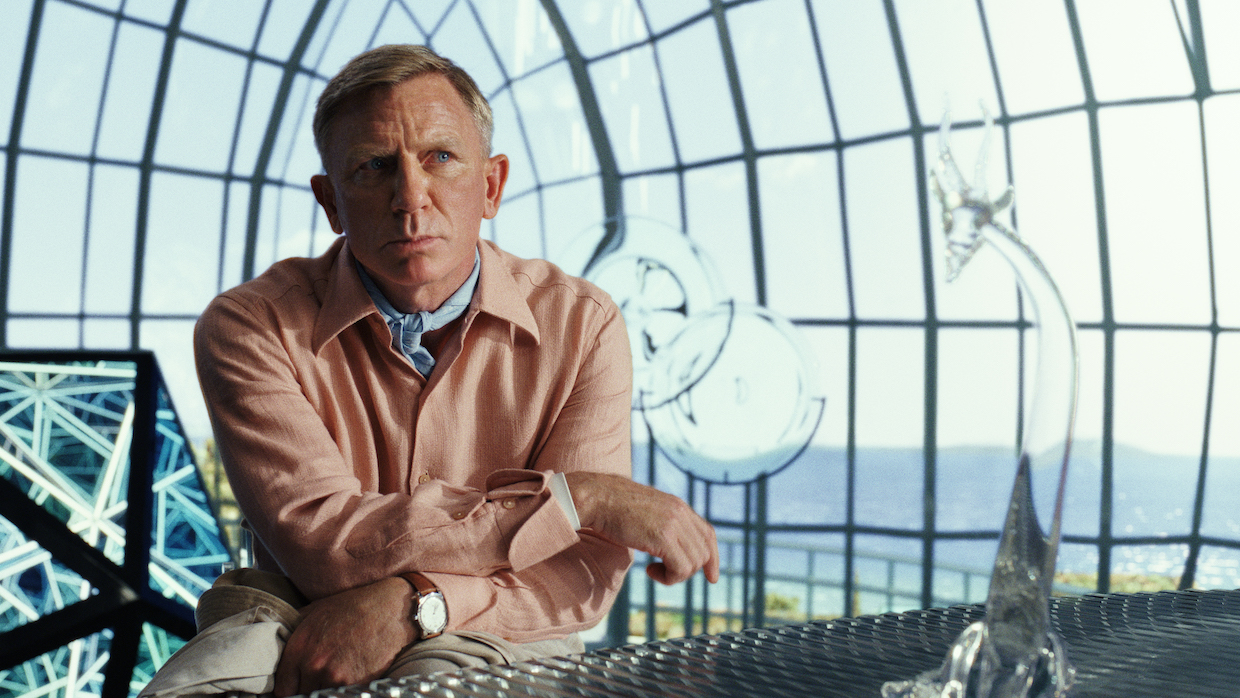 One argument for the eternally vexed question “Why film festivals?” might be “To watch Netflix movies in a theater.” The streamer does, of course, theatrically release some of its prestige titles but, because of its refusal to accommodate 90-day windows, has effectively barred itself from wide releases. Since I live in New York City, I can go see all of Netflix’s big titles when they come out with ease thanks to their acquisition of the Paris Theater, which isn’t all bad: while some of the programming is grimly reserved for week-long runs of titles like Red Notice, there’s room for pleasant surprises. This past month, directors of four Netflix films were invited to curate some personal favorites; thanks to Rian Johnson’s mystery-minded picks, I ended up seeing a very nice 35mm print of Evil Under the Sun, a fairly ideal Agatha Christie adaptation that, unsurprisingly, is indeed a key reference point for Glass Onion, which borrows its first-act mechanics of bringing suspects to an island and running through all their motives, and its third act in ways that would be unfair to reveal; the second act successfully goes its own structural way.

Johnson’s sequel to Knives Out is a decided improvement, starting from its very look: where the first film looked flat, digital and often indifferently lit, Glass Onion flawlessly (minus some dodgy night shots at the very end) simulates the illusion of lustrous 35mm. (Film grain emulation is a specialty of DP Steve Yedlin.) Shot (mostly) in Greece during the pandemic summer of 2021, Glass Onion is a cheerier companion piece to Crimes of the Future, shot in the country right after; Cronenberg went nighttime and dank, but Johnson leans into the time-honored tradition of movies that showcase attractive people against beautiful scenery. After introducing an array of suspects straggling through lockdown in its May 2020-set prologue, Johnson converges them on a Greek island and lets their petty motivations for murder unfurl while detective Benoit Blanc (Daniel Craig) observes. The suspects are the guests, and theoretically longtime friends, of tech bro Miles Bron (Edward Norton), whose politics might be described as either “heterodox” or “redpilled” depending on your point of view. There’s a lot of up-to-the-minute jokes about “disruptors,” NFTs and—as in the first installment—MAGA-adjacent politics (Dave Bautista’s jacked-up MRA advocate, who shills for rhino pills, is in the Alex Jones pocket).

The jokes’ success ratio is erratic but the tone smooths out rapidly as the mystery takes precedence. As in Knives Out, Johnson short-circuits what the original mystery is supposed to be before the first hour’s up and introduces a different direction via extended flashback. But where Knives Out spent somewhere around half an hour flashing back before moving forward, Glass Onion‘s entire second half—a hefty chunk of about an hour before Blanc has everyone gather and listen to his hammy reveal of the killer—is an extended flashback. Much of it replays the first half’s events from different angles, making for an interesting study in dialogue scene coverage that both reveals new information while also just looking good. (Similarly, Janelle Monáe initially gives what seems to be a terrible performance before a crucial reveal contextualizes what’s happening, which is a neat trick—she turns out to be operating at the same high level as everyone else.) Nice-looking images are crucial for what is, fundamentally and unabashedly, a film primarily composed of people talking at each other, often in a lavish mansion-interior room decorated all in red which also takes design cues from Evil Under the Sun. Glass Onion‘s politics land pretty decidedly at “eat the rich”; as one character says, “they call themselves disruptors, but I know who these people are. They’re shitheads.” That’s ironic for a film that seems to drip with money from its title—which implies the budget necessary to license a Beatles track (it’s in there!)—on down through its many cameos and lavish setting. The main house set is cluttered with fine art acquisitions that are part of, presumably, Bron’s diversified portfolio, but the visible expense of these decorations could be a metaphor for the movie itself.

Graham Foy’s The Maiden is a “first do no harm” film—in many crucial ways, it does nothing wrong. An experimental filmmaker whose shorts have played at Cannes, TIFF and NYFF, Foy’s first feature exudes the visual sensibility of someone who’s spent a lot of time thinking deeply about 16mm and its qualities; every shot looks at least good. A story grounded in the day-to-day lives of Canadian teenagers (parents are absent, the only adults their high school’s teachers and administrators), The Maiden boasts faultlessly naturalistic performances across the board, and there’s no insultingly dumb dialogue that underlines the often heavy thematics of teen coming-of-age.

In short, all should be well, but The Maiden is a mostly underwhelming case study in when good enough isn’t enough. It begins with a slow windup, introducing eminently real-seeming skater teens and BFFs Colton (Marcel T. Jiménez) and Kyle (Jackson Sluiter). In tracking shots, Foy and DP Kelly Jeffrey capture the pair’s rolling progress through the Calgary suburbs, the differing sounds and weights of their skateboards carefully registering in the mix. The two hang out aimlessly, listlessly trawling building sites and destroying abandoned TVs. Then tragedy strikes: one of them clambers onto the railway tracks for tagging purposes, only to be struck by a passing train. This, too, is rendered with deliberate understatement: at the moment of imagined impact, the film cuts to the step-printed image of a flashlight on nearby greenery, a poetic stand-in image to distance the survivor from the overwhelming reality of what just happened. The remainder of the first hour tracks the surviving boy as he mopes, listlessly rejects well-meaning school functionaries’ counsel, has some tentative conversations with fellow students and, eventually, finds a diary in the woods from a girl who’s gone missing.

At pretty precisely the halfway point, The Maiden switches to its second narrative—the missing girl, Whitney (Hayley Ness), in the days beforehand. An anxiety-attack prone misfit in a Metallica “Ride the Lightning” t-shirt, Whitney also suffers the rupture of her most important friendship early into her segment, after which she likewise roams the Calgary suburbs, on-foot rather than on wheels, at a much slower speed. As the echoes between each half amplify, with vague intimations of the mystical and reincarnation, The Maiden reveals itself to be very much in debt to Apichatpong Weerasethakul. This isn’t a surprise, considering the first shots are pretty much a restaging of Uncle Boonmee Who Can Recall his Past Lives‘s opening: a forest at night in eye-strainingly low blue light, quiet and breathing, only with a girl journaling. Just as with Joe’s films, I found myself preferring the first half to the second, which is essentially the first but gender-flipped, slower and more mournful from the start. Throughout, The Maiden is so committed to the accurate rendering of the mundane and putatively unexamined that the possibility of anything out of that pocket—to, say, hear the metal the kids listen to on their headphones on the soundtrack, or anything remotely resembling a joke—is clearly off the table. The film’s doubling of rhythms is so impossible to miss that it creates the schematicism its dialogue and action pointedly avoid.