TIFF 2022: Other People’s Children, The Inspection 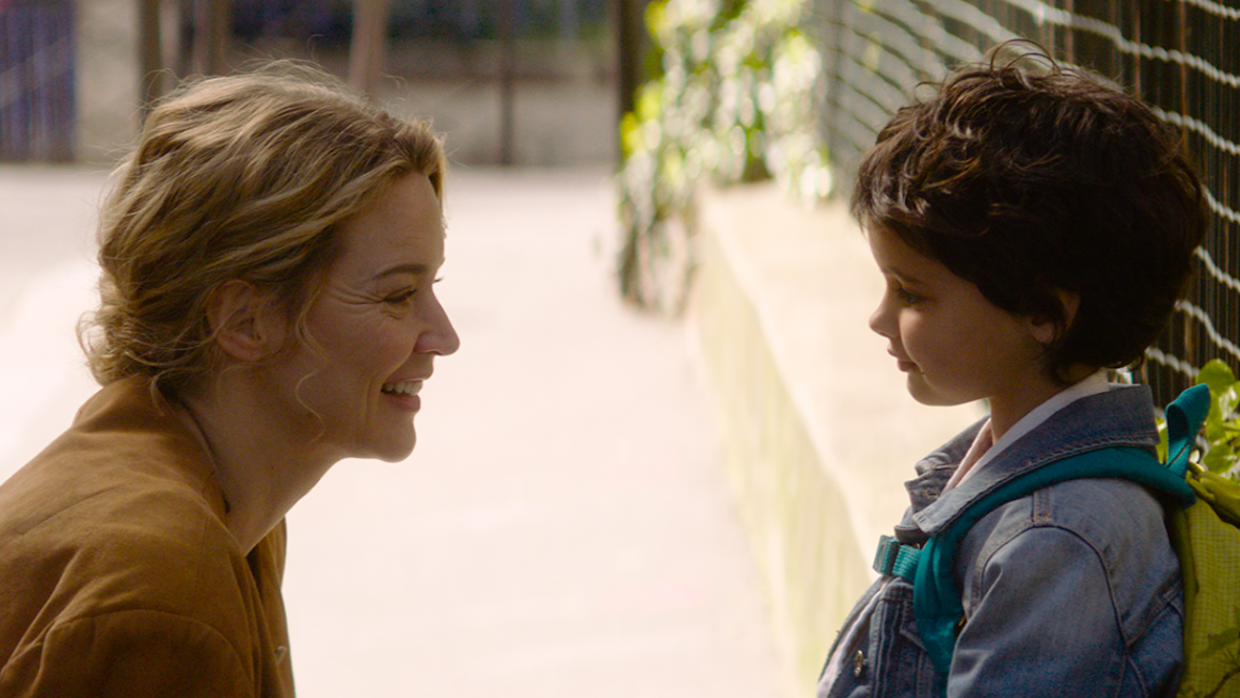 Virginie Efira and Callie Ferreira Goncalves in Other People's Children

It seemed fitting to enter Toronto by a new route for my first in-person TIFF in three years. Rather than going straight from the airport to the downtown core where the festival unfolds, I took a streetcar further afield to one end of the line, Bathurst Station. The Ed and Anne Mirvish Parkette is just outside, with a plaque dating itself to 2008 that gives a mini-bio of the couple (“Humanitarians, Retail Innovators, Arts Advocates”). A few meters over, a conspicuously newer plaque memorializes Beverly Mascoll as “a community advocate and the founder of the Mascoll Beauty Supply Ltd., a distributor of beauty products for Black people and people of colour.” This marker is dated to 2021, thereby lightly telling on itself as a belated addition from the last two years when cities responded to calls for meaningful systemic reform starting with—among other items to follow (at least hopefully)—easily achievable new signage.

TIFF itself has changed the same way that Cannes and Venice have in the pandemic: ticketing systems designed out of exigence to replace queuing during the social distancing era have stuck around but apparently never been adequately stress-tested in the meantime, creating an enormous mess for press and industry. Like many of the attendees grumbling online, I couldn’t get half of the very small quantity of public screening tickets I needed; it took a trip to the press office to get that sorted by an exceptionally nice volunteer who unabashedly said her software was slow-moving and might not cooperate but that she “had her ways.” I am, in large part thanks to her help, thus cheerfully back and ready to re-engage with a city that I sincerely enjoy and a festival that’s always been easier to navigate than others of its scale.

Attending Cannes this summer, the Canal+ logo came to seem like an inescapable, mandatory component for European arthouse filmmaking, to be seen twice a day as automatically as breathing; when it flashed at the beginning of my first TIFF screening, continuity was established. Fresh from its Venice premiere, Rebecca Zlotowski’s Other People’s Children is briefly immensely likeable before counterproductively deflating. Teacher Rachel (Virginie Efira) is introduced showing her high school students Roger Vadim’s 1960 Les Liaisons Dangereouses. A significant plurality of the teens are clearly tuned out, but Rachel’s not much better as she keeps giggling at her text messages. More often than not, directors include scenes of older films because they enjoy them, as much as for any plot reason or thematic resonance they have. Other People’s Children doesn’t echo its source thematically, but the scene in question—with recognizably glamorous vintage Jeanne Moreau and textures that, by default, are radically different from anything in contemporary film—has a draw of its own for viewers regardless of the indifference it produces in the kids. This introductory pragmatism about the limitations of the seductions of classical-era filmmaking was interesting to me, and Zlotowski offers other superficial eccentricities that aren’t plot-driven. The soundtrack is a mix of grandiosely re-arranged Bach, French pop, deep cuts (Dave Von Ronk’s “Cocaine Blues”) and an original score by ROB that’s shamelessly gorgeous in an old-school way hovering around Rachmaninoff and Michel Legrand that movies don’t indulge much anymore. Zlotowski’s other unorthodox fillips include a two-scene cameo from Frederick Wiseman as Rachel’s gynecologist, having her own father play Rachel’s dad and a lot of in/out irises that look executed in-camera by a none-too-steady or experienced hand.

The film opens with one such iris-out from the Eiffel Tower; later, Zlotowski and DP George Lechaptois obviously go to a great deal of trouble to capture the Tower’s reflection on a car window over Efira’s face, flattening the two into a single plane moving through space. It’s a grand gesture, but to what end I had no idea; my viewing companions cut the Gordian knot, pointing to the romantic connotations of the Eiffel. Other People’s Children turns out to be a surprisingly sour romance between Rachel and car designer and single father Ali (Roschdy Zem). The two meet in guitar class and start out strong; Zlotowski shoots his apartment’s interior with anamorphic lenses and shallow focus that makes it appear dark, huge and seductive. Rachel actively asks to meet his daughter Leila (Callie Ferreira-Goncalves) and shortly becomes an extremely eager caretaker because—as the script repeatedly underlines—she badly wants a child of her own, possibly because her mom died at an early age. (In the press kit, Zlotowski notes the autobiographical resonance in writing the experience of “a 40-year-old woman without children, who wants one, and in part raises those of another woman”—and also, happily, that she unexpectedly became pregnant during production prep and gave birth a few days after mixing was done.)

Her maternal instincts also lead her to mentor Dylan (Victor Lefebvre)—a troubled student with undercharecterized Dardennes-movie-refugee vibes who keeps going truant—despite the objections of her fellow schoolteachers. “I know kids like him,” Ali objects. “If I were feeling mean, I’d call you a narcissist”—but, because he loves her, he’ll settle for deeming her a “little soft.” The majority of Other People’s Children has Rachel being treated increasingly disposably by the only putatively well-meaning Ali despite giving her all, and the film increasingly generates the feeling of an extended, unmediated whine about oblivious men delivered to an overly-sympathetic friend. I lost all patience at the end; up to that point, Rachel is a character presented in a complicated and ambivalent manner, but is suddenly and unambiguously vindicated by a grateful outside party as a good person who absolutely lives up to her social liberal goals. She was right about everything all along!

One of TIFF 2022’s big world premieres, Elegance Bratton’s The Inspection is the writer/director’s first narrative feature and an attention-getting rarity as a closing night selection by a new filmmaker at NYFF, which almost always goes for a more experienced/name-value director. Bratton dramatizes his own experience as a Marine from 2005 to 2010, with acclaimed theater actor Jeremy Pope taking the feature film lead for the first time as his stand-in, Ellis French. The result is reasonably fun (boot) camp but the question is whether this is in any way intentional, which is possible but not very probable. At a trim 95 minutes, The Inspection packs a lot into its prefatory, pre-boot camp stages: French is seen on his final mornings of freedom saying goodbye to friends on a New Jersey Transit platform, asking his homophobic, Carrie’s-mother-levels-of-Christian mom Inez (Gabrielle Union) for his birth certificate and leaving a dark wood-paneled homeless shelter with words of caution (“you don’t have to do this”) and uplift (“you’re so smart”) from a fellow queer transient. The parental face-off is extended but everything else is swift, suggesting a commendable reluctance to spell out easily guessable backstory at unnecessary length.

Once training starts, so does the comedy: the Marines Corps’ methods of instilling discipline via endless screaming are familiar, eminently mockable and hard to see without images of Full Metal Jacket (or, less elevatedly, Major Payne) popping into my head. At times it seems like the film is leaning into the comedy of hyperbolic abuse, but that’s very unclear—and, given the sincerity with which pervasive homophobia is dramatized, unlikely. It doesn’t take a lot of imaginative stretching to queer a space full of sweaty men enacting ritualized power relations, so Ellis’s dream sequences—another man approaches him in the shower and so on—don’t come as a particular surprise. The enlistees fall into war movie standards of one stereotype per demographic: the Muslim who has to hear endless “jokes” about 9/11, the other Black guy, the homophobic white guy and drill instructor’s pet, with these three much more fleshed out than the remaining recruits, who are essentially just background bodies. (When the grunts decompress by discussing their dream meals, all from fast food chains, it serves as a reminder that poverty is one of the armed forces’ biggest recruiting tools.)

The period evocation is minimal (and, thanks to the closed environment of Marine boot camp, budget-friendly in an “one set, but it’s really big” way): I frankly would have been disappointed if there wasn’t at least one scene of George W. Bush justifying the Iraq war on an analog TV set, which came along sooner rather than later. Linguistically, The Inspection‘s periodized moments include a recruit barking out that he’s very “chillaxed” and, more chillingly, Inez chewing out her son for “his lifestyle.” It has been (thank goodness!) at least a decade since I’ve heard “homosexuality as a lifestyle choice” trotted out in the mainstream rhetorical sphere, and while The Inspection is a clearly personal reminiscence from this moment in military history, I found myself confused as to where it lands. For clarity I turned to a 2014 interview with Bratton, who seems positive on his time in the service: “My life remarkably changed for the better. Over time, once you learned what it is to be a Marine and what it means to wear this uniform, it became empowering.” Perhaps this is why the film’s seeming villain, an insanely psychopathic (even by genre standards) drill instructor played by Bokeem Woodbine, is named “Laws”: blame legal structures of homophobia, not the troops.