IBC Show 2022: The Fresh Gear Filmmakers Should Know About 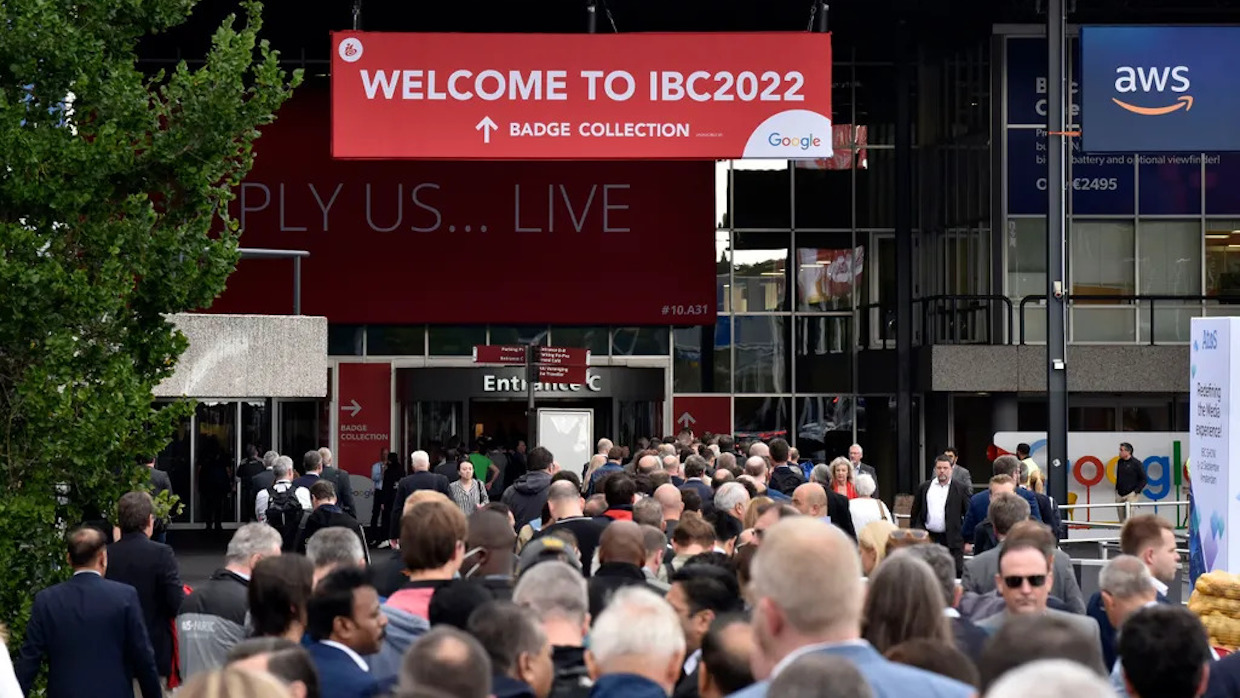 IBC Show was back in full swing with its familiar multi-day in-person event, with more than 37,000 smiling faces eager to attend the festivities. The Amsterdam gala is like no other trade show in the industry, pinning studios, media entertainment companies, tech innovators, software providers, filmmakers and creators under one roof. You can literally have a meeting with Google or Amazon AWS in the morning, then learn about the latest offerings from Canon, Sony or Avid in the afternoon.

Similar to this year’s NAB Show and Cine Gear Expo LA, the future of technology was a buzzy topic on the show’s floor, with cloud-based innovations dominating the conversation. The keynote address from VR/AR pioneer Nonny de la Peña brought the Metaverse center stage, exploring what entertainment and storytelling could look like in 2030 and suggesting that the days of simply putting on virtual reality headset will be replaced by fully immersive, interactive experiences. That would put Surrogates right around…2080?

There was also plenty of new gear. Here’s a roundup of the brightest from IBC Show 2022. 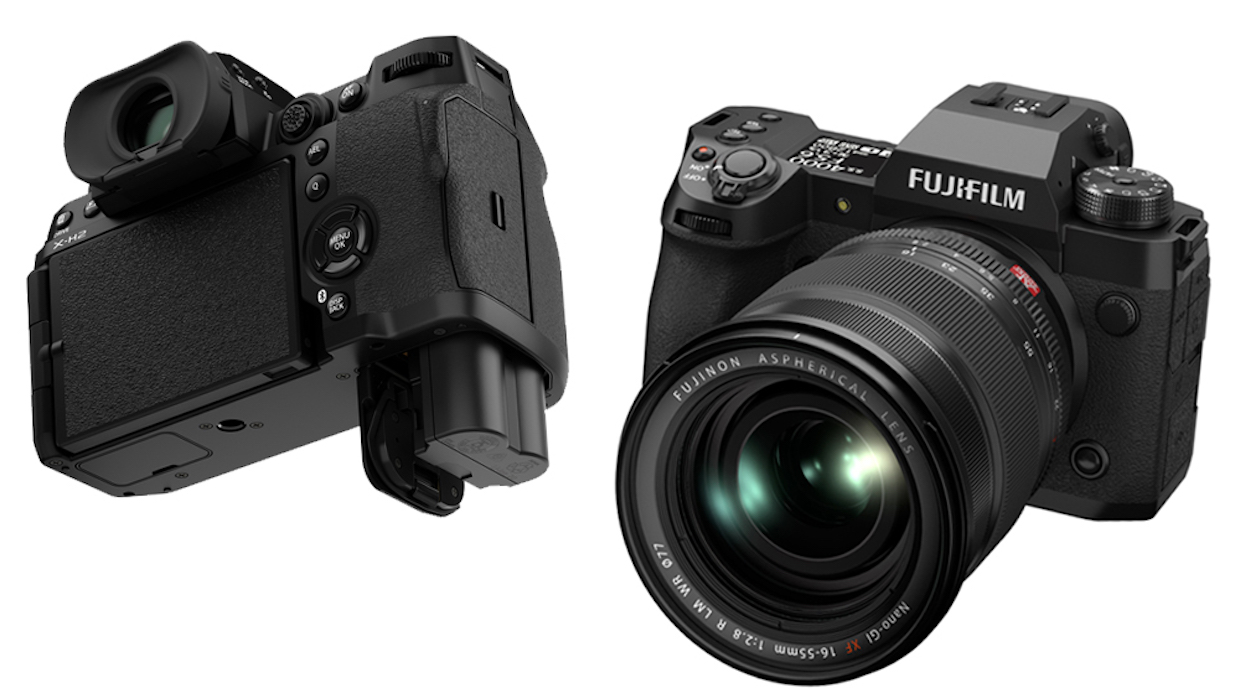 Fujifilm made a splash with the announcement of the X-H2 mirrorless camera, a less expensive version of the X-H2s that still packs a punch. The camera boasts a 40MP APS-C sized sensor while topping out at 8K (7680 x 4320) 30p 10-bit video recordings in Apple ProRes 422 HQ. Internal recording options for 6.2K, 4K DCI and full HD are also available, as well as 4K DCI 60p.

RAW recordings are possible through a HDMI port via ProRes RAW with an Atomos recorder, or Blackmagic RAW through the Video Assist 12G recorder. Fujifilm also added internal F-Log 2 recordings, which the company suggests offers 13+ stops of dynamic range. To maximize 8K recording times you’ll want to invest in Fujifilm’s optional cooling fan (FAN-001) that clips to the back of the camera. When paired, it’s said to offer around 240 minutes of 8K recording time.

With the backside illuminated X-Trans CMOS 5HR sensor and new X-Processor 5 image processor, users will see an uptick in hybrid autofocus performance. Fujifilm added a new subject detection AF function that can detect human faces and eyes, as well as animals, vehicles and airplanes, that allows you to track subjects while keeping them in focus. 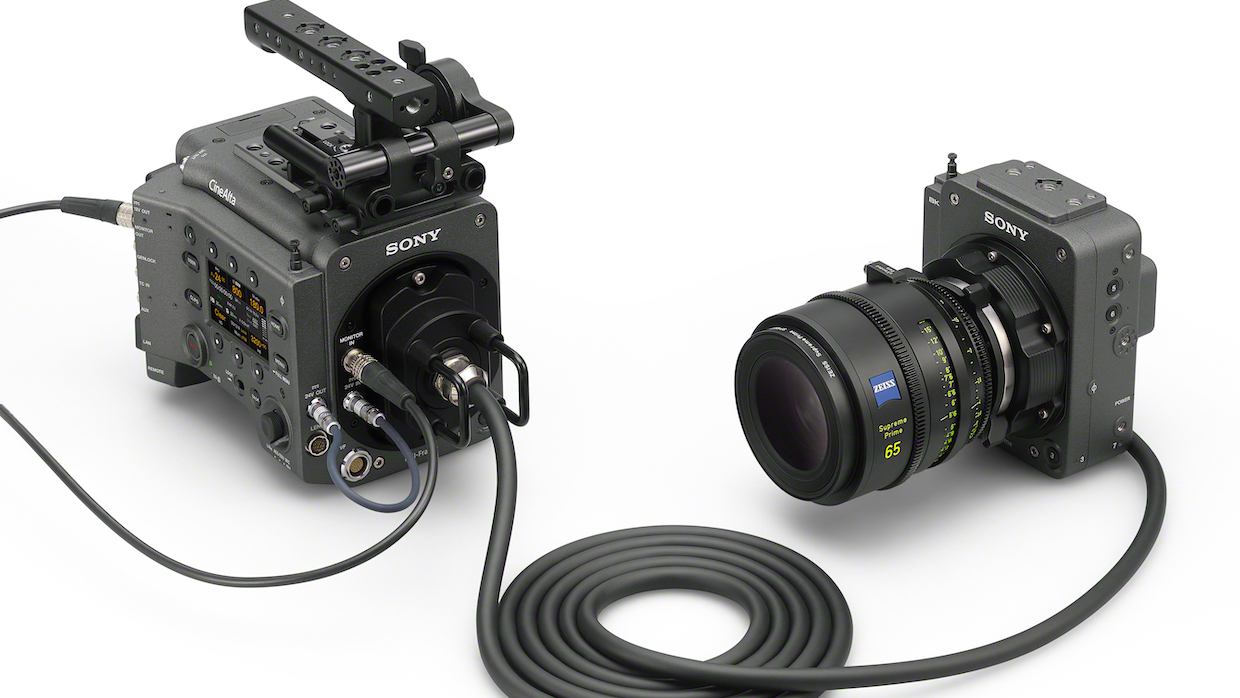 Sony introduced its second generation VENICE Extension System, which allows the main body of the camera to detach from the lens unit. Nicknamed “Rialto” by early adopters, the original was a true innovation, with a number of large productions using it including Top Gun: Maverick and James Cameron’s Avatar sequels.

Building on its success, Sony has more than doubled the operating length from up to 18 feet to 39, using a single tethered cable without any loss in quality. VENICE Extension System 2 offers cable lengths at 9.8 feet (three meters) or 39 feet (12 meters), includes two additional assignable buttons (four total), and is available in PL or E-mount.

Canon refreshed several professional camcorders, adding the XA65, XA60, XA75 and XA70, as well as the VIXIA HF G70, to its lineup. The two standouts are the XA75 and XA70, boasting a 1.0” sensor, 4K UHD recording, 15x optical zoom with 40x digital zoom, Dual Pixel CMOS AF, face tracking and dual XLR audio input with 4ch audio recording, as well as support for infrared shooting and an HDMI output. The XA75 offers 3G-SDI support as well. The XA65 and XA60 share similar features with the aforementioned but are wrapped in a 1/2.3 sensor, while adding a bit more optical zoom at 20x. As with the XA75, the XA65 has both HDMI and 3G-SDI outputs.

For those looking for innovation in PTZ cameras, Sony introduced the full-frame FR7, which has an E-mount interchangeable lens design with built-in pan/tilt/zoom function. The unit is designed around Sony’s 35mm full-frame CMOS Exmor R image sensor (12.9MP, 35.6 x 23.8mm) and BIONZ XR processor. It supports up to 4K UHD 120p recording, has 12G-SDI and HDMI outputs, genlock and timecode, as well as a two channel audio via XLR (5-pin) input, ethernet connectivity and standard streaming protocols (RTSP, SRT and NDI).

Sony didn’t stop there. They packed the FR7 with external RAW recording, a variable electronic ND filter, dual memory card slots (CFexpress Type A and SDXC) and Sony’s fast autofocus, with real-time Eye AF and Tracking AF on a sensor that can expand to ISO 409,600. Essentially, what Sony has done here is merge tech from the FX3, FX6 and Alpha series and developed a PTZ camera from it, the idea being to enable seamlessly switching from PTZ to their Sony Alpha or Cine cameras on set.

Canon introduced its own new PTZ camera, the CR-N700, which features 4K 60p 4:2:2 10-bit recording wrapped in a 1.0” CMOS sensor. Similar to Canon’s other PTZ models, it has all the bells and whistles for seamless recording via standard communication protocols. The PTZ also has a 15x optical zoom and 30x advanced zoom, as well as 12G-SDI, 3G-SDI and HDMI outputs, while featuring Canon’s Dual Pixel AF. 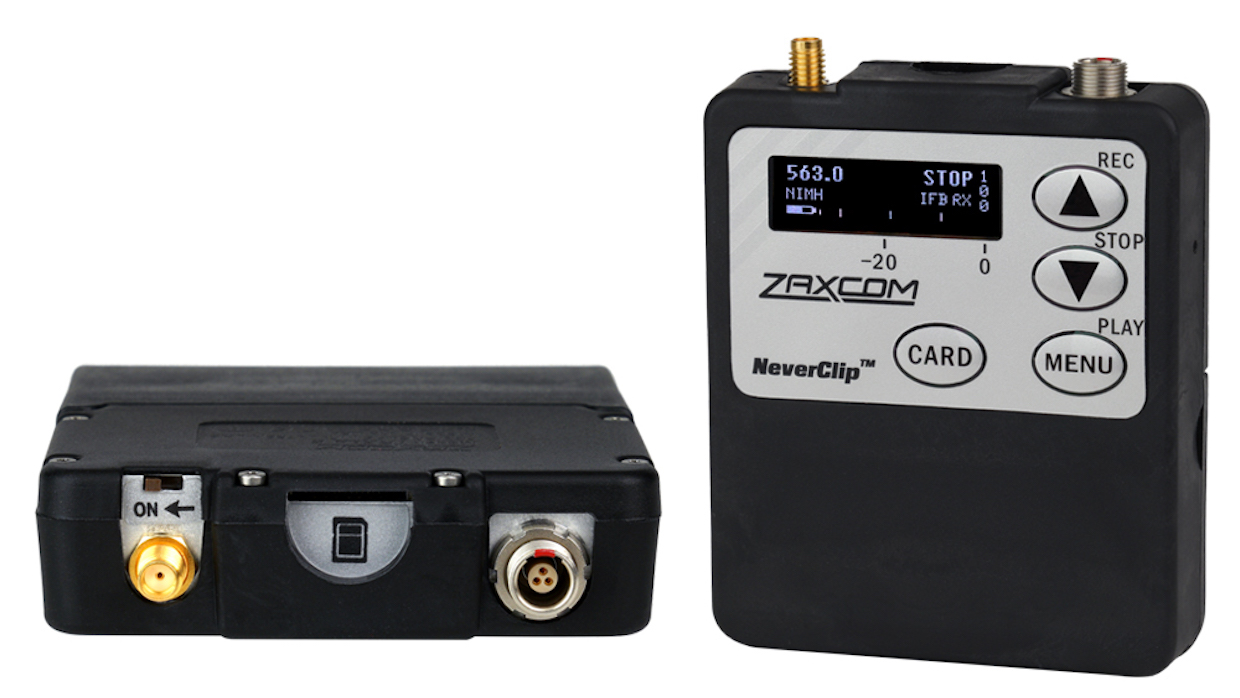 Zaxcom’s new wide-band bodypack TRXLA5, and the TRX745 plug-on transmitter, made waves for audiophiles, particularly production sound mixers. Building off the success of its predecessor, the TRXLA5 transmitter carries all the familiar features the company offers, including fully encrypted digital audio, simultaneous internal recording to a microSD card, Powerroll to extend battery life, NeverClip to extend the dynamic range, timecode and ZaxNet to control functionality remotely, but the lightweight transmitter covers a wide frequency range globally from 512.0-698.0 MHz, while in the U.S, it covers from 512.0–607.9 MHz. The unit runs off two AA batteries, has 100mW output power and supports 5V microphones via a 3-pin micro LEMO.

Lectrosonics had on hand its D Squared digital wireless microphone platform, which combines low latency with studio quality audio. The complete system offers a number of solutions for audio recording, including the DHu handheld transmitter, the DPR-A/DPR plug-on transmitters and the  DBu, DBSM, DBSMD belt pack transmitters and DCR822 compact receiver. For those needing a more robust receiver, Lectrosonics has available the DSQD four-channel receiver, which seamlessly integrates with all available digital transmitters.

Lectrosonics has also introduced its Lectrosonics University called LectroU, a platform where you can soak up audio knowledge and learn more about how to use their products. More info can be found here. 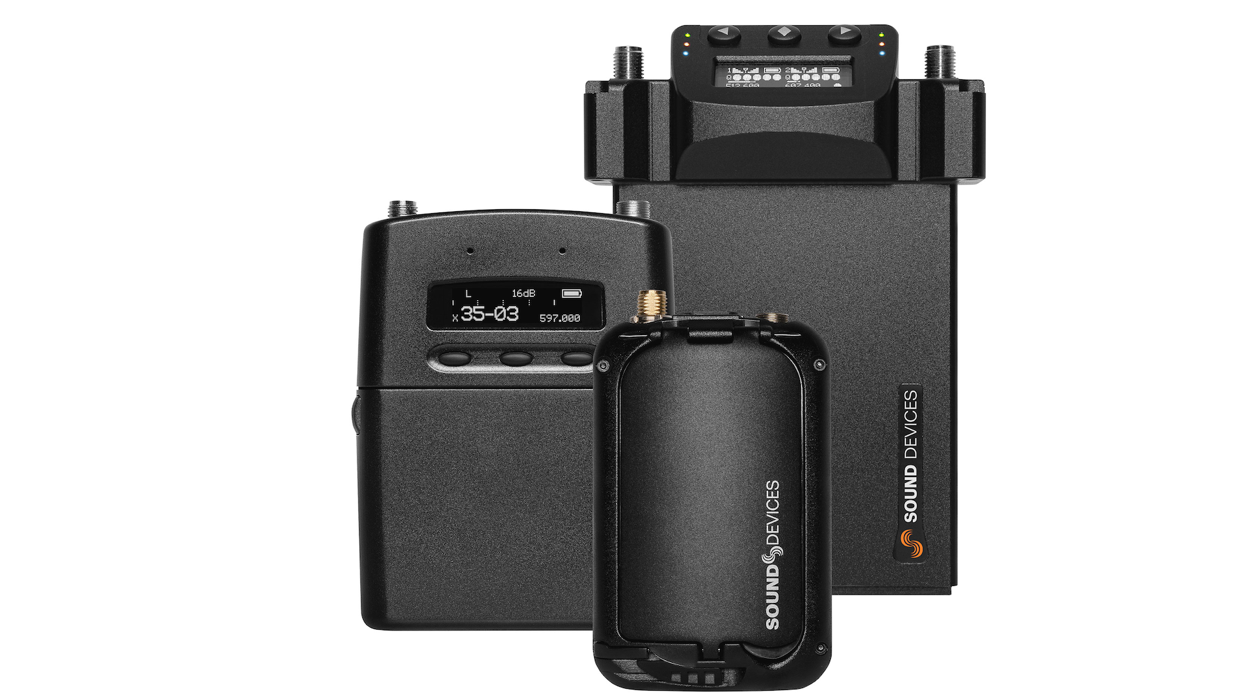 Sound Devices had its new A20-RX wireless receiver and SpectraBrand Technology on display. The A20-RX is a dual channel diversity receiver that seamlessly fits within the Sound Devices growing wireless ecosystem. The unique feature is the SpectraBrand Technology inside, which provides a huge UHF frequency range of 470–1525 MHz in a single unit so you’ll theoretically never have to worry about finding an RF channel again.

Sennheiser had its next-gen EW-DX wireless system on hand. First shown during Infocom 2022, the system offers two- and four-channel receivers, bodypack and table stand transmitters and handheld microphones. The first suite of products are expected in late 2022, with more items coming next year. The system will feature a maximum-switchable bandwidth of 88 MHz, AES 256 encryption and will be integrated with Sennheiser Control Cockpit software, Wireless Systems Manager desktop software and Smart Assist App.

Others include Ambient Recording’s timecode based LockIt system, which has been around for a while and is now in its eighth generation. Wisycom had its app on display for its Symphony series wireless transmitters and receivers, along with a new RF-over-fiber interface, the Wisycom BFL1, which features selectable filters, an expanded dynamic range and a long range Bluetooth 5 programming link. Wireless audio designers QX5 had on hand their popular PlayerMic, a flexible rubber bodypack worn by professional athletes for those famous “wired for sound” moments during broadcasts.

The lens category saw a number of new announcements. Sigma is developing a 65mm T1.5 for its Cine FF Primes and a 65mm T2.3 for their Cine FF Classic Prime lenses. Panasonic introduced a Lumix S 18mm F1.8 wide angle lens which covers full-frame and is available in L-mount. XEEN announced a new 50mm T2.3 2x anamorphic cine lens that covers full-frame and will be available in PL mount. Fujifilm released the new XF 56mm, designed for high resolution sensors like the X-H2 and X-H2s mirrorless cameras, and the GF20-35mm lens for its GFX series cameras.

Samyang introduced its new V-AF Cine Primes, which are geared towards shooters looking for lenses with autofocus. The series will initially offer five focal lengths (20, 24, 35, 45 and 75mm), cover full-frame, have a unified form factor, color match and have smooth 300-degree focus gear to attach standard follow focus systems to the lens. 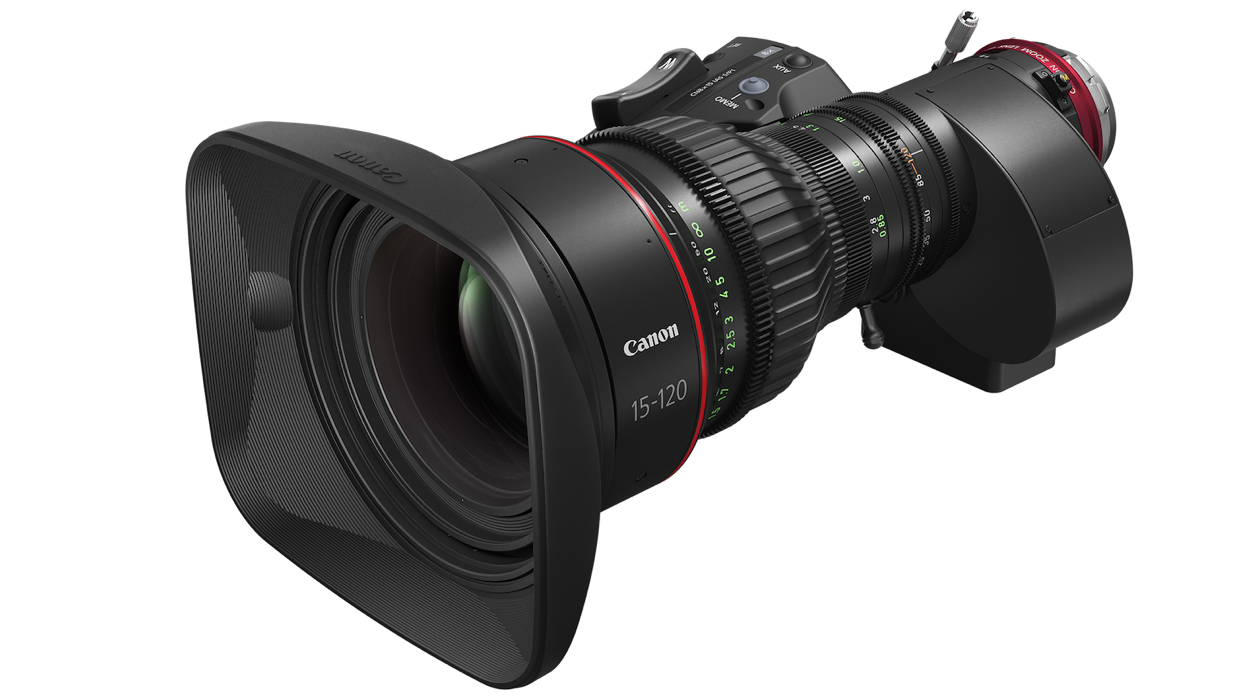 Canon released a new CINE-SERVO 15-120mm T2.95-3.95 for EF or PL mount. The high-end lens is designed for 4K, 8K and HDR productions and supports both Super 35 and full-frame workflows. The optics are designed to match the color science of Canon’s existing cinema lenses, and with the built-in 1.5x extender, you can reach 180mm. It features an 11-blade aperture and the EF mount supports Cooke /i Technology while the PL version supports both Cooke /I metadata and ZEISS eXtended Data making it great for visual effects workflows as well.

Blackmagic Design released four new Ultimatte 12 models designed for keying virtual sets, along with an Ultimatte Software Control app for Mac and Windows that provides creative control. The series offers a version for any type of production and includes the Ultimatte 12 Mini, Ultimatte 12 HD, Ultimatte 12 4K and Ultimatte 12 8K.

Avid showcased its Nexis Edge system, which enables creative collaboration from any location with secure access to media, as well as its cloud-hosted Edit On Demand software that allows for “over the shoulder” virtual editing.

IBC Show 2022 closed out an outstanding year of major industry tradeshows (with the Cine Gear Expo in Atlanta on Oct. 7), with new innovations and technology we can look forward to using for years to come. Here’s hoping the trend continues in 2023.