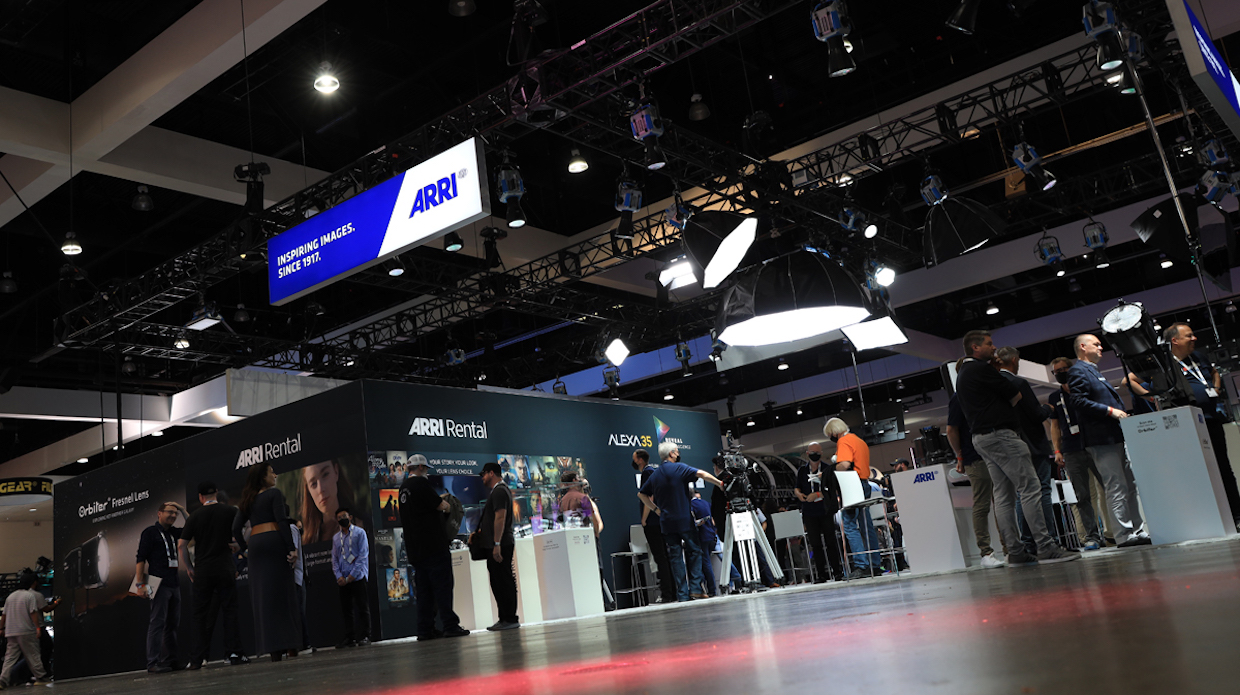 Cine Gear Expo Los Angeles roared back over the weekend, as the multi-day tradeshow saw a number of key exhibitors return to its new home at the LA Convention Center. Attendees poured in by the thousands eager to get their hands-on the latest tech, soak up knowledge at a seminar or tune their skills during a masterclass.

While cloud-based technology emerged as a theme at NAB Show 2022, Cine Gear had its share of companies showcasing turn-key virtual production solutions. Among them is NoitomVPS, which combines a 5×7 capture space and hybrid tracking markers with optical cameras. The motion capture data is funneled through Perception Neuron Studio, which provides the body sensors, gloves, transceiver and software (Axis Studio) you’ll need to get up and running. 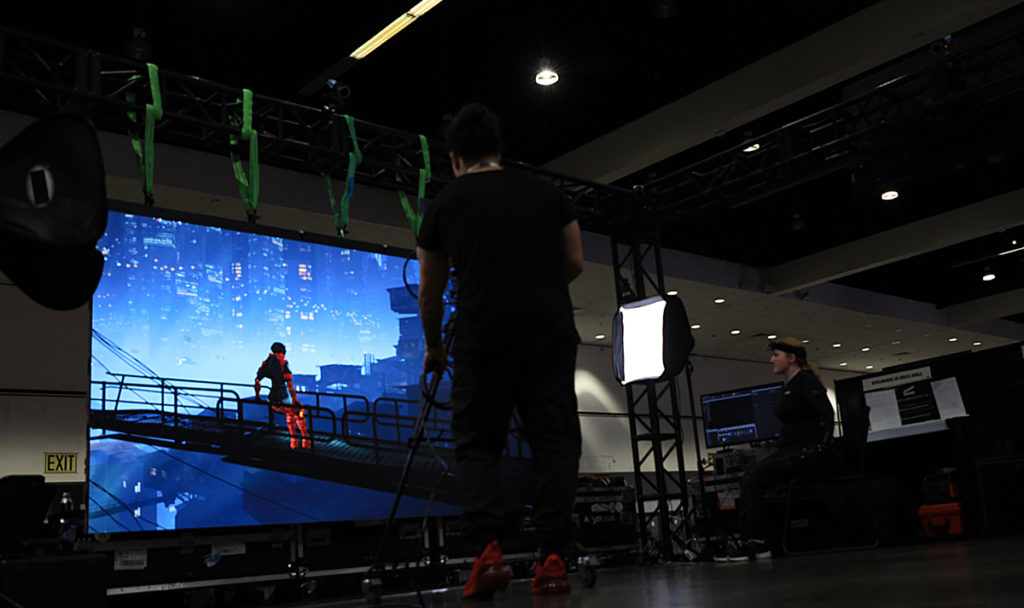 The setup fully integrates with the Unreal Engine pipeline and supports timecode sync and genlock. Better yet, the camera tracking is ridiculously precise and has zero drift. The demo included a LED wall (it’s also compatible with ARWALL) which instantly transformed the talent wearing a mocap suit into a ninja running through a video game environment.

NoitomVPS is ideal for previs, visual effects and even broadcast work. The turn-key solution starts at $50,000, which may seem pricey—but, in a virtual production pipeline, pretty cost effective.

ARRI also made its presence known with its LF family available for demo, including the Alexa LF and Mini LF. But the buzz was definitely around the new Alexa 35: a Super 35 format 4.6K sensor which touts Alexa’s new Reveal color science that provides better skin tone reproduction, better overall color and cleaner edges thanks to a new processor. If you’re looking for a deep dive into the Alexa 35, the “Alexa 35 Report” from Film & Digital Times provides everything you need to know.

Also catching our eye at the ARRI booth were AFLA lenses from ARRI Rental. The 2x anamorphic glass renders a softer, more textured feel than the Master Anamorphics, with no focus breathing. The eight lens set covers large format sensors and is available in 40mm to 190mm focus lengths. The lenses feature a fast T2.5 aperture, with the exception of the 190mm at T3. Alongside them were Moviecam spherical lenses from ARRI Rental, a set that rehouses 1970s glass with modern technology. 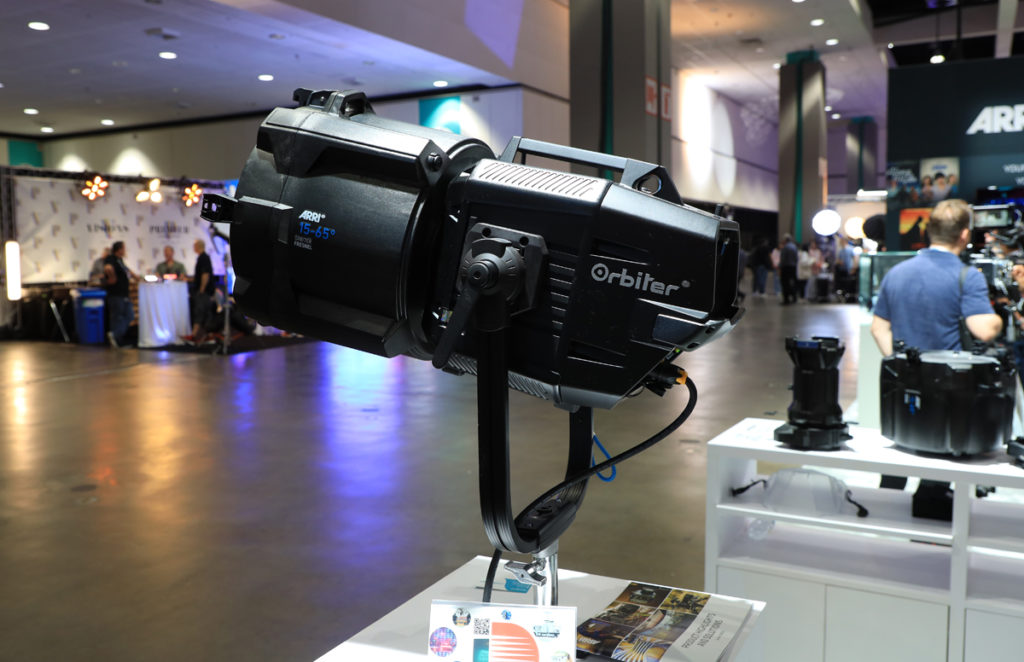 ARRI also had its new Orbiter Fresnel fixture on hand. The Fresnel housing is compact, with a large zoom range of 15 to 65°, and can be controlled via the control panel or remotely. The fixture is quite impressive and will find its way on production sets for years to come. 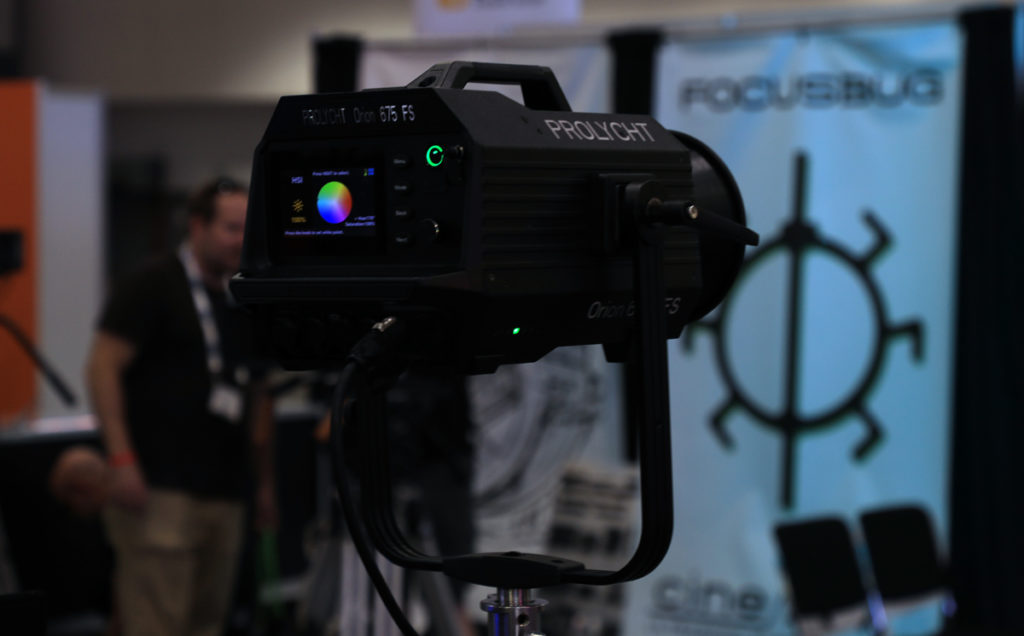 Lighting was a dominant area of interest on the show floor. Aputure had a number of new accessories available for its P600c series, including a softbox, barndoors, yokes and diffusers. Godox showed off its spotlight and panel lights, including the KNOWLED M600D, a punchy daylight LED fixture that produces 740W when paired with a fresnel. Fiilex had its Q10 Color lighting up their booth. Prolycht had its Orion 675 FS and 300 FS on display, both of which have been turning heads since their release—filmmaker Philip Bloom’s review of the 300 FS illustrates just how well the fixture illuminates a room. Others on hand including Bepop, Creamsource, Chimera, FilmGear, K5600, Litepanels Nanilite-Nanlux and Sumolight. 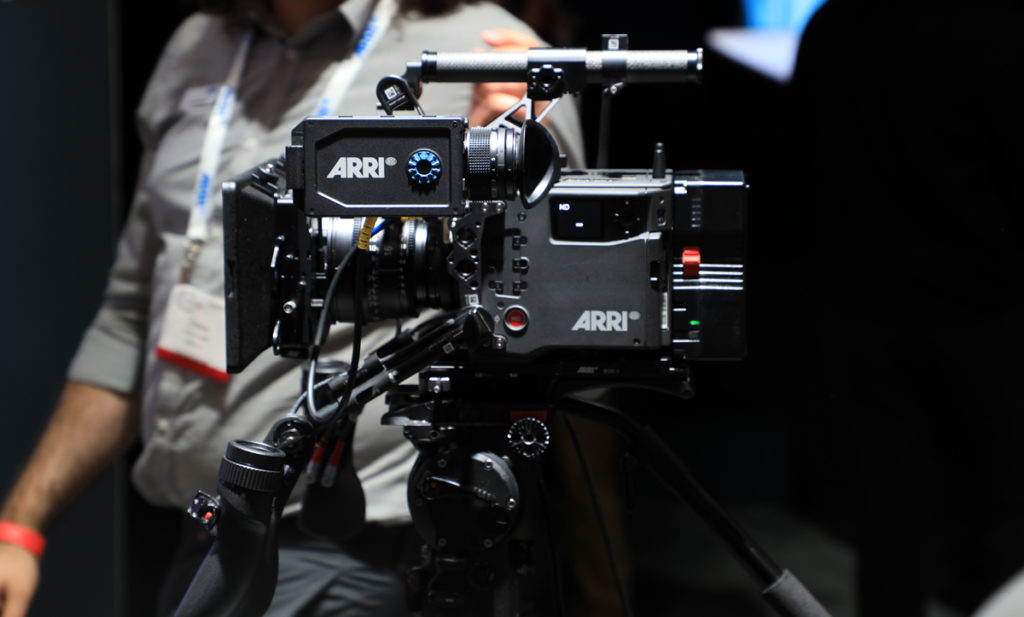 The ARRI Alexa 35 on display

No new cameras made their debut during the show as far as we could uncover. Blackmagic Design had its URSA Mini Pro 12K available. Canon had its Cinema EOS cameras on hand, like the EOS C70, as well as mirrorless offerings including the EOS R5 C. Canon’s Cine Zoom lenses were also available to test run. Sony had VENICE 2, the FX6, FX9 and its flagship a7S III available. Panasonic was there showing off their Lumix S1H, GH6, and BS1H. The latter is a full-frame box style camera which we were quite impressed with; its small footprint and modularity offer a lot of shooting options, including drone rigging. 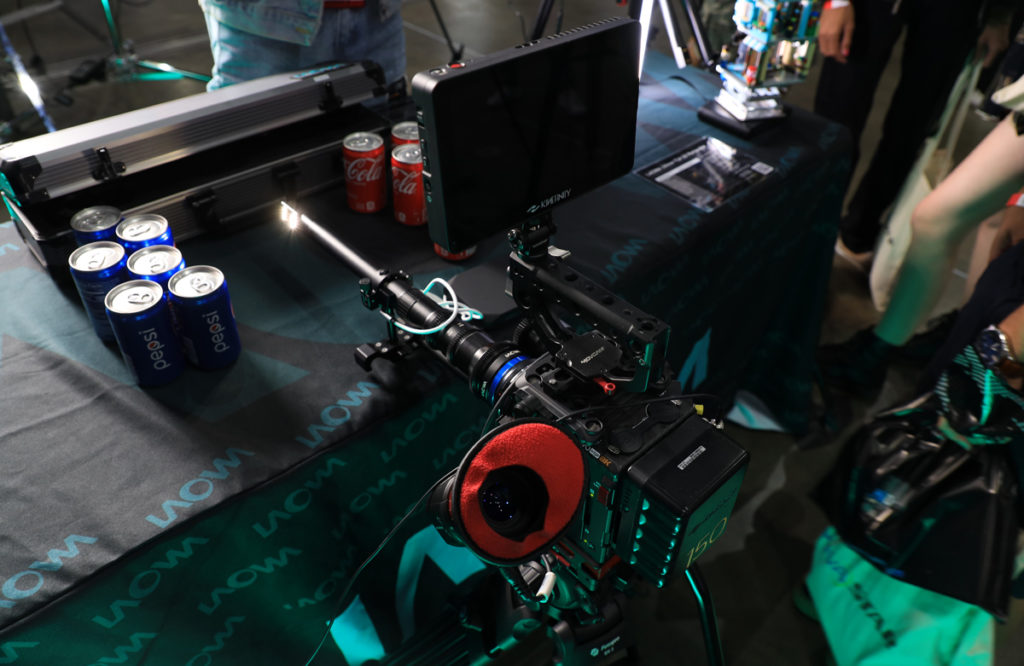 On the lens front, Laowa had its new full-frame “probe” lens on hand, the FF 24mm T14 2x Macro Periprobe. If you’re unfamiliar with probe lenses, they can create some very interesting shots because of their long snorkel-like tube. The FF 24mm 2x Macro Periprobe has an interchangeable tube that allows you to shoot 0° or 90°. Check out this video to see it in action.

Laowa’s new full-frame Nanomorph anamorphics were launched through crowdfunding as the world’s smallest anamorphic lens—and when they say the smallest, they do mean it. These tiny lenses are available in three focal lengths: 27mm, 35mm and 50mm, with a 1.5x squeeze. Each lens will have nine different mount options and cover Super 35. Better yet, Laowa is offering two different flare colors, blue or amber. Panasonic had a 50mm amber flare mounted to a GH6 and it created a very nice looking image in such a small footprint. The amber flares were warm and pronounced, reminding us of a similar look to the SIRUI 1.8x anamorphics. 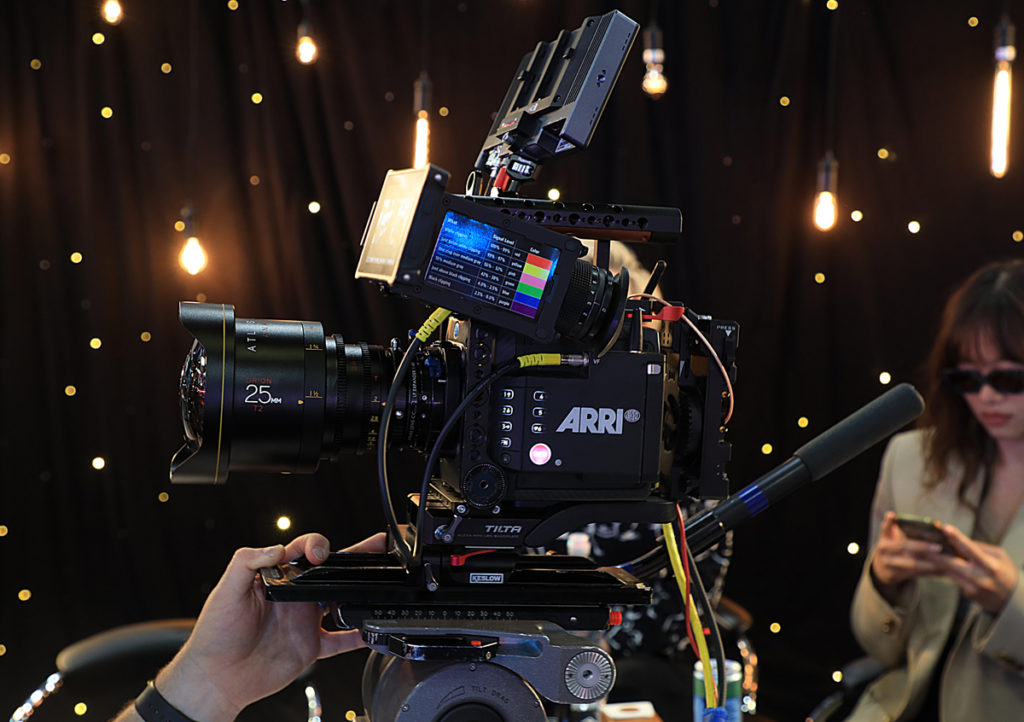 Another standout was Atlas Lens Co. The company is located in Glendale, California and designs anamorphic lenses. One of its founders, cinematographer Dan Kanes, fell in love with the look of anamorphic and wanted to create a set of professional lenses that are affordable—enter the Orion series. The set has focal lengths from 32mm to 100mm but the company was showing off two new options: a 25mm and 21mm anamorphic, both offering a 2x squeeze, streak flares and waterfall bokeh with a beautiful shallow depth-of-field. 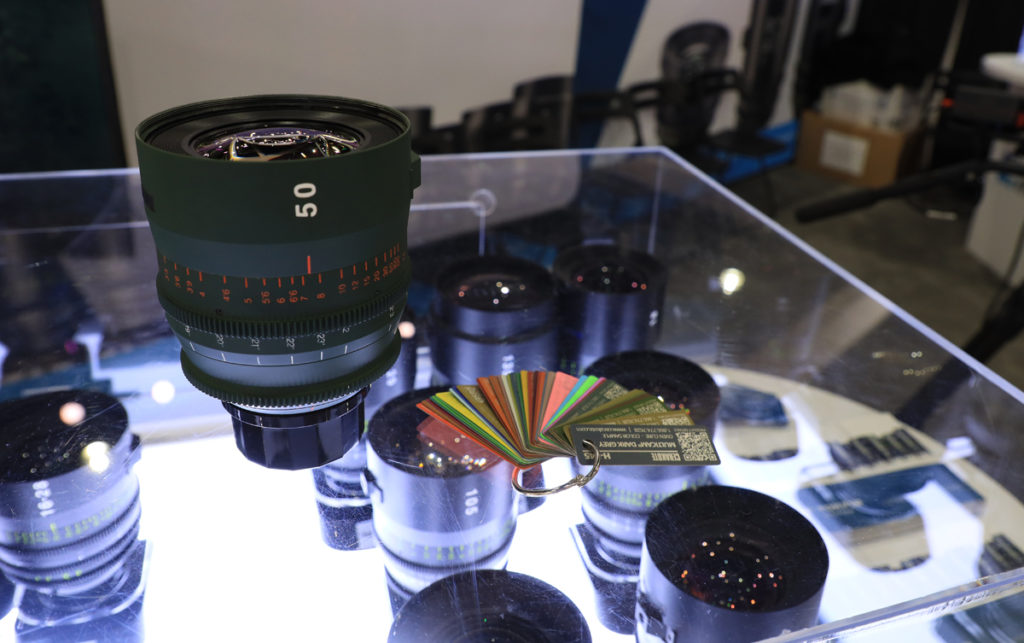 Tokina is now offering customized color housing for its Vista Prime lenses and had a green 50mm lens with orange accents on display. There are a number of color options to choose from but they come with a hefty price tag—around $2,000 for each lens. 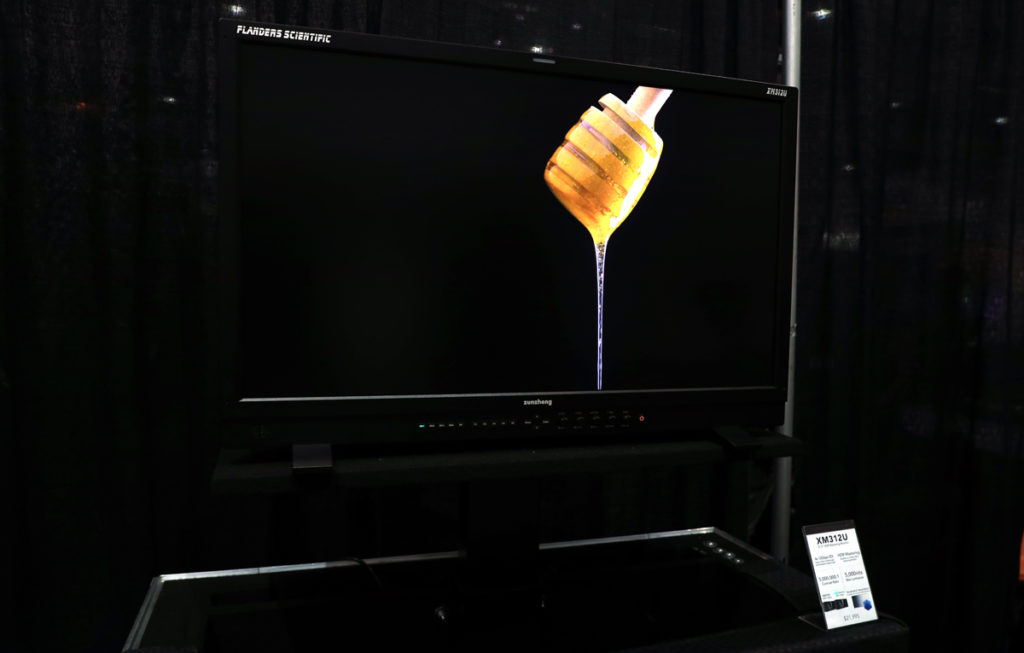 Rounding out the show was a number of companies offering product support and workflow solutions for production pipelines. Flanders Scientific had its new XM312U HDR mastering monitor on display. The professional grade monitor touts 5,000 nits of luminance and a massive 5,000,000:1 contrast ratio while supporting 12Gbps SDI. Also on the display front, Canon had the 18.4” DP-V1830 HDR reference monitor on hand, which supports Rec.709, Rec.2020 and DCI-P3 as well as ACESproxy.

Teradek introduced the Serv Micro, an HDMI-only wireless video and production-streaming solution. Vaxis was on hand, showcasing its line of wireless video systems including the ATOM 500, a dual HDMI 1080p60 system that offers a 150-meter range. 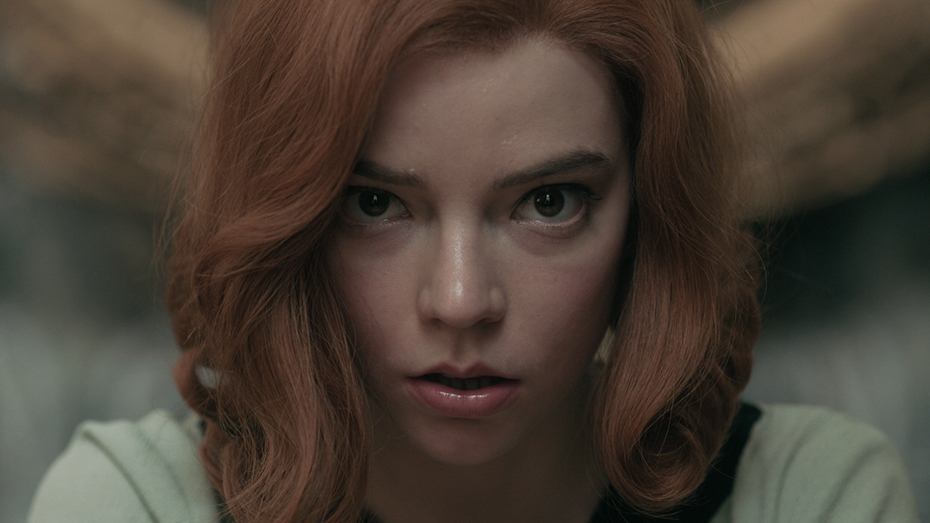 ShotDeck is a great image resource for filmmakers

ShotDeck, the startup from cinematographer Larry Sher (Black Adam, Joker), was also on hand. It’s now out of beta and is a fantastic resource for filmmakers looking for inspiration. The library is home to thousands of high-definition images to use for reference, storyboards or pitch decks. Starting July 1, the company is returning its beloved Recreation Contest, where creators who recreate the best frame from a movie win some great prizes. You can find more about it over at shotdeck.com. 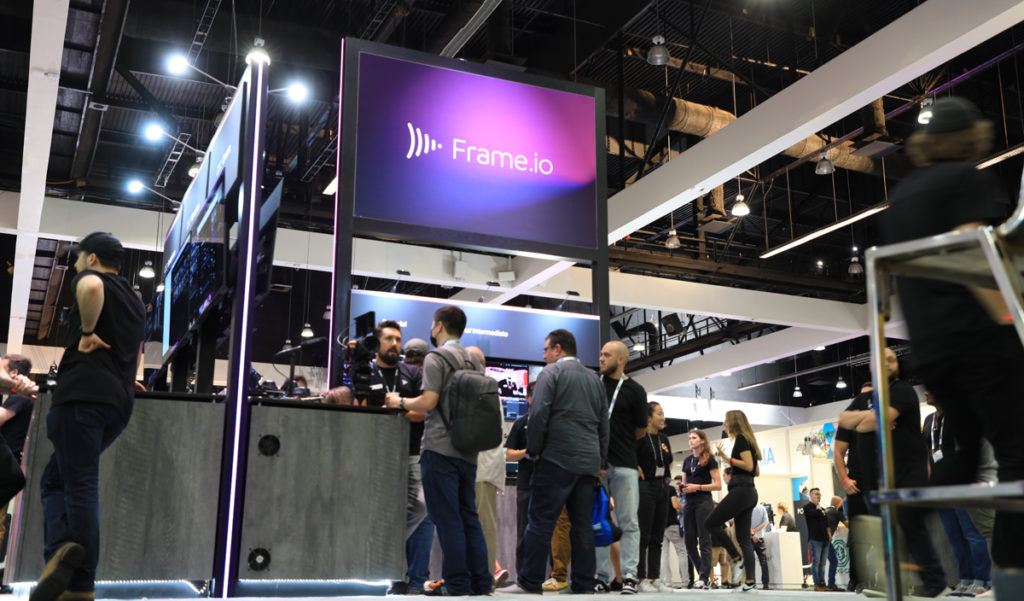 Frame.io made a big splash during NAB Show 2022, introducing a number of new collaborators to its Camera to Cloud (C2C), including Atomos and FilMiC Pro. The technology allows for the recorded camera files (or sound) to be uploaded directly into a cloud-based environment for dailies review or early editing. They also introduced new integrations with Baselight, the color grading platform. During Cine Gear Expo, the company said all the latest integrations are now available. Plus, they’ve included ARRI’s new Alexa 35 as part of its approved C2C cameras.

Next stop for Cine Gear Expo is Atlanta come October 7, 2022. You can find out all the latest information about the show here.  Who knows, by then we might see a jolt of new cameras and gear introduced if the rumors turn out to be true.