Leading up to our 18th birthday, I’ll be revisiting on the blog one issue of Filmmaker a day. Today’s is Spring, 1994.

Rose Troche and Guinevere Turner’s Go Fish was our cover story, Spring, 1994, and I think may have been our first original piece of cover photography. Holly Willis’s story was a comprehensive account of the film’s production and sales process, charting the film’s beginnings as a no-budget feature begun alone by Troche and Turner to one produced by Christine Vachon and Tom Kalin and sold by famed producers’ rep John Pierson to Goldwyn in a Sundance bidding war. (The lesbian feature would go on to be the “dykes” in Pierson’s memoir, Spike, Mike, Slackers and Dykes.)

“One of the best things that happened to Go Fish was that we ran out of money,” claims Troche. “It was August of ’92 and we had to close up shop. We had hit rock bottom. But then we hooked up with Christine [Vachon]. We were able to take the film and do a rough edit so we could look at what we had and see where the holes were. It was like Swiss cheese; there were holes in the narrative galore.” Additional scenes were shot, and the voice-over commentary was added….

For executive producer Christine Vachon, the project was love at first sight. “Rose and Guin sent me a videotape almost a year ago. It was 20 minutes of rough scenes and a letter saying, “We don’t have any money and we don’t know what to do.” I saw that the film was something that I wanted to get involved in. The writing was very strong and the performances were good and I saw that there was a quirky sensibility to it that I found very interesting. I also saw that it was the lesbian movie that I had been looking for. It had the potential to go very far and I knew that the so-called community was looking for this kind of movie. At that point I started trying to raise money. They were about 60% finished, although I thought and they thought they were a little further along. But they ended up reshooting some stuff. So I knocked on a lot of doors and carted that tape around to a lot of different places and mostly met with rejection before I finally made a deal with John Pierson at Islet to finish the film. We were able to provide the funds for them to shoot some more, and then Rose and Guin came to New York last summer for post-production, which we thought was going to be a fairly short process, but stretched into quite a lengthy one. With them in New York, Tom and I were able to help with post-production and make sure everything was going well.”

Pierson is quoted in the article too:

On Go Fish about the only thing I can claim to have creative credit on is being the first person to be really vocal about thinking that the original working title, which was Eli and Max, which is the name of the two central characters, was really a lame title for two reasons. One, I hate any movie title that has two names in it because it usually indicates dudsville. And second, I know it’s a lesbian movie and I know it’s a dykey lesbian movie, but still it just didn’t seem helpful to have a movie which bore two names that were unisexual. I just thought there could be something a lot livelier and funnier. At first I think there was some resentment or resistance to the idea, and then Christine called me one day and said that they’d come up with some potential new titles and I thought, ‘Oh great.’ She told me there were three in ascending order of preference and the first one was “Leave it to Beaver,” I said, ‘Oh just stop teasing me. Don’t call me up to bust my chops about how I’m asking for a better title so I’ll have a chance of selling it,’ and the next one was, “Once Upon My Girl,” and I said, ‘OK, just stop right there,’ and she said ‘no, no there’s one more and its “Go Fish”,’ and I said, ‘Well, if they’re serious, it’s a great title’.”

Another thing about Go Fish. The way I remembered it, before this film Sundance was practically divided into two halves, a “Plan A” and “Plan B.” That’s still the case, but today it’s more a division for general audience ticket buyers, not the industry. Back in the day, the filmmakers would hang during the leisurely “Plan A,” and then the heads of distribution companies would show up during the second half and buy stuff they heard was good. Pierson created buzz for Go Fish by announcing to the acquisitions community that he would sell the film after its first screening. I remember some distributiors being angry, but the ploy worked with the Goldwyn sale.

Mid-blog fact check: I’m in Europe and away from my bookshelf, so after writing the above I decided to fact check by emailing John Pierson. My memory is only semi-correct. John responds with more detail and precision:

“We created the first ticking clock (my version of 24) and subsequently had the first ever sale AT the festival. But surely it was sex lies five years earlier that triggered the rush to ticket Package A. In a side note, I also think execs were happy to leave L.A. and get to Park City in January 1994 right after the Northridge earthquake! It was sweet when Tommy Rothman himself got on the case for Go Fish. By the end of Sundance 94, Clerks and Spanking The Monkey were also sold.

Troche went on to make two more features and now directs for several television series and is a co-executive producer of Showtime’s The L Word. Turner has written scripts for films like American Psycho, The Notorious Betty Page and BloodRayne and recently appeared as an actress in Jamie Babbit’s Itty Bitty Titty Committee. 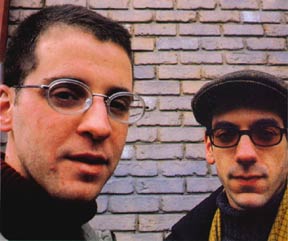 Also in the issue, Ted Hope offered advice on how to hire a production designer, Peter Bowen interviewed Pedro Almodovar, Doug Block wrote about a startling new technology that was revolutionizing indie film (the tape-to-film transfer), and I profiled two filmmakers (pictured) who had started a little underground film festival as well as a production company that was doing movies about pedophiles, punk rockers (G.G.Allin) and pornographers (Al Goldstein). The company was Stranger than Fiction Films, and the filmmakers were Andrew Gurland (whose The Other Woman is in pre-production with Eli Roth producing) and Todd Phillips, now an A-list comedy director by virtue of hits like Old School, Road Trip and The Hangover.