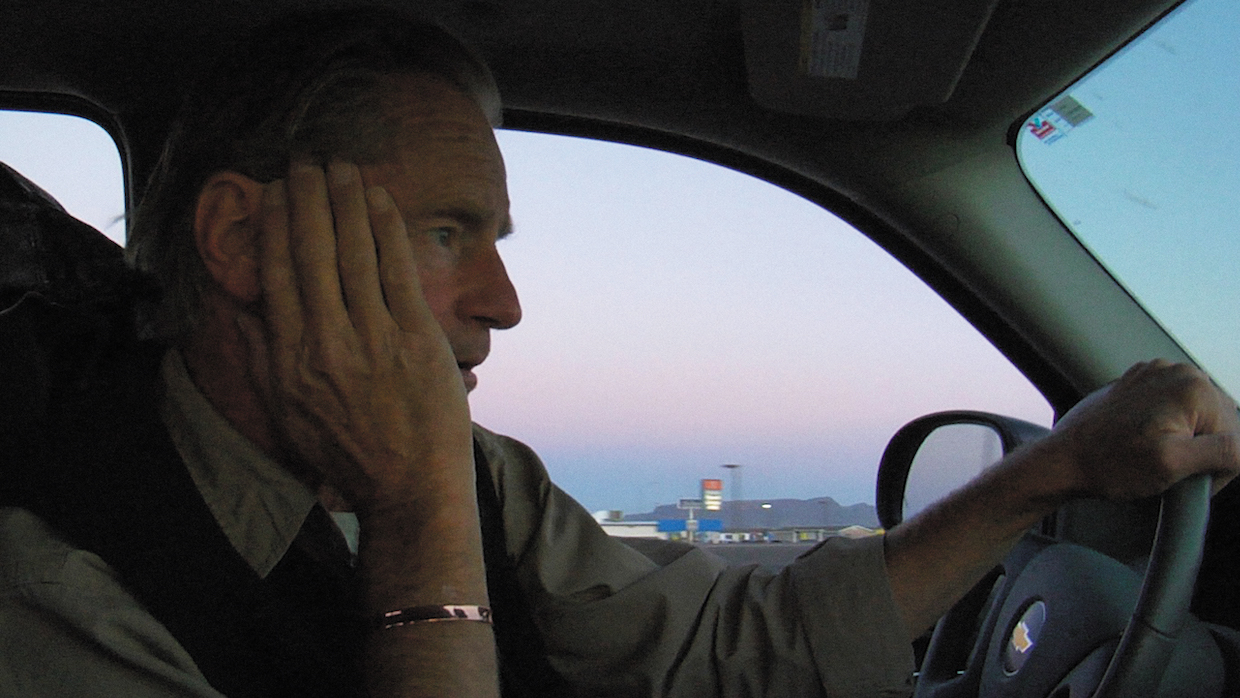 A decade ago, director Treva Wurmfeld appeared in our 25 New Faces while her feature debut, Shepard & Dark, was in post-production. The film is an intimate capturing of an often epistolary friendship between Sam Shepard and his friend, archivist and writer Johnny Dark, that is also a surprisingly wide-ranging and personal portrait of the celebrated playwright himself.

Now, five years after Shepard’s passing, Wurmfeld has revisited her film’s outtakes and published the results in Tangents: From the Making of Shepard & Dark, forthcoming this fall from Oscilloscope Laboratories. As she writes in the book’s introduction, “In these dialogues, Sam tells stories, talks about his ideas, and references many interests including writing, theater, film, family, Greek mythology, astrology, animal husbandry, women, mortality and alcohol—all while on the road in New Mexico, Texas and Kentucky.” For Wurmfeld, revisiting her time with Shepard and Dark provided another way of reconsidering not only the content of these talks but the documentary director-subject relationship itself. She writes, “Filming with Sam was complicated; even though my camera did its job of capturing the present moment, no amount of filming could truly capture all the layers at play that existed somewhere in the space between his work, his character, me and the tension that comes from having head-to-head creative agendas. At a certain point I had to ask the question, was he my subject or was I his?” Below, we present an edited excerpt of one of the “tangents” included in the book, where Shepard discusses the roots of his newfound appreciation for Sophocles and Greek tragedy, which led to one of his final theatrical works, A Particle of Dread: Oedipus Variations.” —Scott Macaulay

Shepard: Well, I stayed away from Oedipus, stayed away from the Greeks entirely for a long time, because I didn’t think I was bright enough to get it. I was intimidated by it. But finally my friend Joe Chaiken told me that I should try it, just for the heck of it. So, I did, and I was kind of stunned by how simple, how direct and to the bone it was—the language, the ideas and the audacity of it, it’s quite incredible. Anyway, I thought for a long time I would try and adapt it, but it didn’t seem possible, because nobody knows what that religious culture was like back then and it seemed stupid to try and imitate it. And then to try and adapt it to a modern audience where everybody wears suits and ties and dark glasses—[that] seems even more stupid, like the Blues Brothers doing the Greeks, you know? So, I gave up on it, actually, and then recently when I was in Utah I started thinking about it again, and I came across this translation by Robert Fitzgerald, who’s better known for his translations of The Iliad and The Odyssey. His translation of Sophocles’s whole trilogy is astounding. So I started taking things out and putting them on the board [looks up at whiteboard in office]. That top line comes from Antigone: “It is the dead, not the living, that make the longest demands.” At the same time I was starting to write variations on it, I got a call from my friend Stephen Rea in Ireland saying that he was putting back together his theater company, Field Day, which evidently he had going in the ’70s. It broke up, and now he’s putting it back together in Derry in the North. When the Protestants took over Derry they called it Londonderry, and when the Catholics took it over they called it Free Derry. It’s the last walled city in Europe really, partitioned, you know, so I thought this would be a perfect place to do variations on Oedipus. And then my musician friend Bill Frisell came along and wanted to do music to it, so everything started to fall into place. We’re shooting for 2013, and now I’m just kind of tracking it and traveling with it, using some of the original characters and then some invented characters, but the themes and the situations are all from the original.

Wurmfeld: What about the themes and the characters are meaningful to you?

Shepard: Well, the biggest one is this thing about destiny and fate. I find it very compelling that the oracle predicts things and then Oedipus tries to evade the prediction from the very beginning and inevitably ends up fulfilling the oracle without even knowing so. Even as an old man in Oedipus at Colonus he proclaims his innocence about these acts, and in a way he was totally innocent—he didn’t intentionally set out to kill his father or intentionally set out to bag his mother. But that’s what happened. And that’s something he desperately tried to avoid, which makes the play so astounding and kind of shakes you to the bone. I think it has to do with mortality more than anything—it’s the clearest statement about mortality that I’ve ever come across, the inevitability of what’s gonna happen to us no matter what we try to do to avoid it.

Wurmfeld: Can you talk about how you connect to the language of it?

Shepard: Absolutely. There are many other aspects to it, not the least the poetry of the thing and the way the language is constructed, particularly in this translation, you know—he’s retained all the hard-edged brilliance of it. The poetry kind of rings. A lot of translations I’ve read are sort of pompous, in a way, or I don’t know if they’re pompous or not, but they feel that way, and you don’t have access to the real poetry, which has to do with the word choices more than anything. For instance, “Fear unjoints me, the roots of my heart tremble like night fall of the past”—stuff like that. “Child of endless night, you yourself are the pollution of this country, you’re the murderer whom you seek, you weave your own doom.”

Wurmfeld: Are you incorporating these lines into your variation?

Shepard: Well, some of them I’ve used directly, and others I’ve just messed around with, but I thought it might be useful to see some of these things that actually stir up the emotions of the piece, and the conflict and the predicament of it. I mean they’re like incantations, in a way—they conjure something, which all good poetry should do. It’s a kind of strange music.

Wurmfeld: How these works impact your life and how you interpret them are very interesting to me, and probably most important for the film, you know what I mean?

Shepard: Oh, OK. Well, here’s an example. This trilogy of plays immediately gives you insight into the whole picture of your life. So, you may be trying to live it day by day, in a Zen way, or in an Alcoholics Anonymous way, or something like that—life is one moment at a time, you know? And it probably is, but this gives you the moment being eternal rather than just something that you’re struggling to find meaning in, that you’re struggling to be busy in—having breakfast, going to tea, having meetings, whatever it is.

Wurmfeld: It’s amazing to me because these themes fit perfectly with everything I’ve filmed with you.

Shepard: Yeah, I mean it fits me. I think.

Wurmfeld: Yeah, why is that?

Shepard: Because I feel that the essence of the thing is very much part of the fabric of my life, which was basically chaotic and crazy. Artists I think in general have this predicament, whether you’re a painter or a dancer or a musician or a writer, whatever—you’re continually searching for form in order to stop this myriad, this chaos. So, it makes complete sense to me, and I think that’s what happens to Oedipus.

That one tries to have control, or lacks control, is not gonna affect the outcome one bit. There’s no escape. So, there’s no calming force being conjured up by the fact that you might feel you have a modicum of control, as we do, whether it’s to do with cigarettes or sex or alcohol. “I have to control this thing, and I do have some control over it”—well, it’s gonna come and bite you in the ass anyway, you know, ’cause you don’t really have control. I mean, you don’t go off the deep end, but some people do. Like, I was watching a thing on Jim Morrison the other night, and he went off the deep end—I mean, he just plunged. He crashed to the stage and laid there for an hour while these other poor musicians were trying to play and entertain the audience while he’s lying on the fucking ground. [laughing] Oh dear.