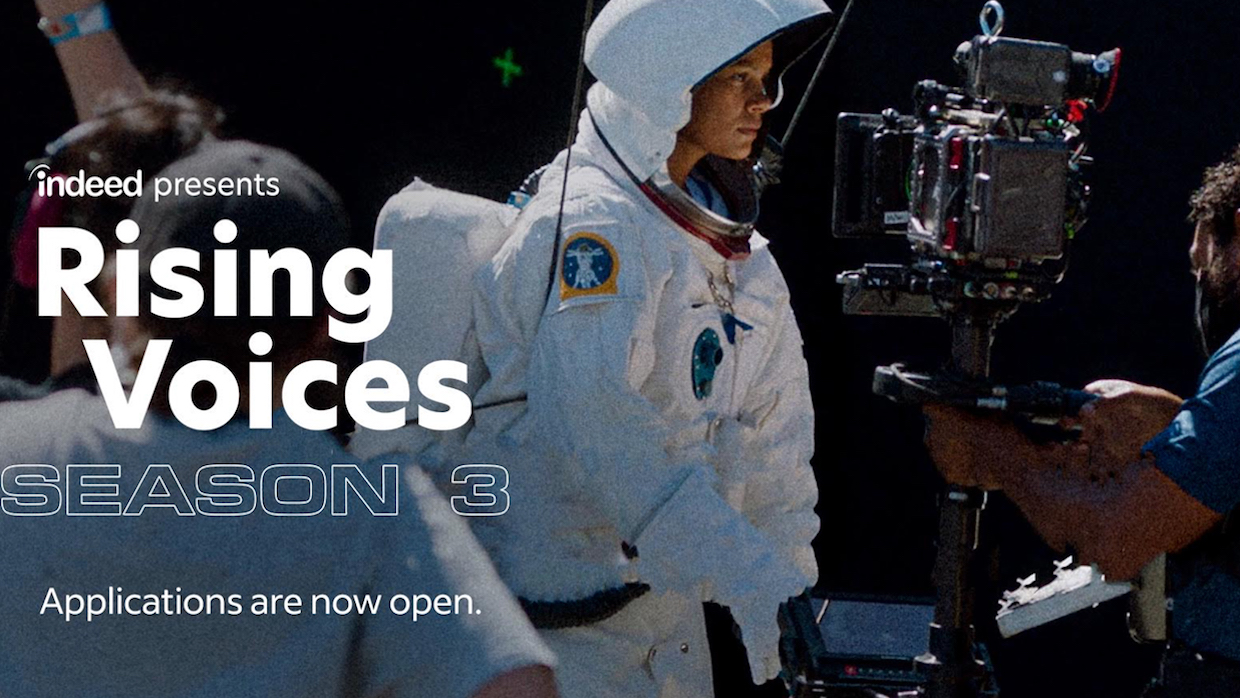 Applications are open through November 11 for Indeed: Rising Voices Season 3. The program is in partnership with writer, director, producer and actor Lena Waithe and her company, Hillman Grad Productions, as well as 271 Films. Indeed: Rising Voices was created to help jumpstart the careers of Black, Indigenous and People of Color (BIPOC) filmmakers, specifically those based in the U.S.

Now in its third year, the program selects 10 filmmakers to receive up to $100,000 in financing for their film, which will then premiere at a New York City film festival next year. Indeed has once again made a $3 million commitment to Rising Voices’s third iteration. The program launched in 2021, with over 1,600 applicants vying for a spot among those selected. The inaugural lineup included Gabriela Ortega, featured on our most recent 25 New Faces of Film list.

“Partnering with Indeed for the Rising Voices initiative for the past two years has been beyond rewarding and we are so proud to be back for a third time,” said Lena Waithe, Hillman Grad Founder, and Rishi Rajani, Hillman Grad CEO, in a statement. “Creating opportunities for underrepresented BIPOC creators in Hollywood is our mission, and we are forever grateful to Indeed for their partnership which allows us to empower the next generation of great storytellers.”

In addition to receiving up to $100,000 and having their film premiere at an NYC-based festival (with Season 1 and Season 2 having screened at Tribeca), the 10 filmmakers selected for the program will be given mentorship. This will be provided by Lena Waithe, executives at Hillman Grad and 271 Films, which is run by sisters Constanza and Doménica Castro. The filmmakers will also receive $5,000 in compensation for writing an original script and $5,000 for directing.

The alumni from the first two seasons of Rising Voices have since gained recognition from various festivals, among them Tribeca, Sundance, Hong Kong Lesbian & Gay Film Festival, Pan African Film and the 45th Asian American Film Festival. Prominent projects that Rising Voice fellows have become involved in include directing episodes of The Chi on Showtime, the Disney+ show American Born Chinese and Chicago Fire on NBC as part of NBCU Directors Program. Other notable milestones include landing a staff writer role for the Netflix sketch show Go Off with Jess and Julissa, being hired by Sony Pictures International to write a script, directing commercial TV work for Jeep and Oakley, being accepted into the Netflix Content Creator Program x Ghetto Film School, participating in HBO Short Film Award Program and being nominated during the NAACP Image Awards.

“After two successful seasons of Rising Voices, where our extraordinary filmmakers debuted their films at the Tribeca Festival, it’s clear the program’s creativity and heart is inspiring more conversations and action toward equitable access in the industry.” said Indeed CEO Chris Hyams in a press release. “Lena Waithe, Hillman Grad, 271 Films, and Indeed provide filmmakers with all the tools they need to show Hollywood that all people deserve a seat in the director’s chair. Rising Voices is proof of our belief that talent is universal, but opportunity is not. This is one of the many ways Indeed continues to demonstrate our commitment to breaking down bias and barriers in hiring, and to help all people get jobs.”

This year’s program will focus on the theme Future of Work in response to the ever-evolving nature of the workplace, particularly in the wake of the pandemic. Indeed, Hillman Grad and 271 FIlms will ask the Rising Voices Season 3 filmmakers to show what the future of work looks like to them and the world around them.

“It has been extremely rewarding watching the success of this initiative and the platform it provides for the filmmakers,” SVP at Indeed LaFawn Davis said in a press release. “We are truly honored to continue our partnership with Hillman Grad, 271 Films, and the Rising Voices initiative to support BIPOC filmmakers throughout the process and help the entertainment industry, like all industries, become more diverse and representative of the people and communities that consume content.”

Visit the Hillman Grad website to submit screenplays highlighting the Future of Work, no later than Friday, November 11, 2022. Also be sure to check out this application video that expands on Indeed: Rising Voices Season 3.