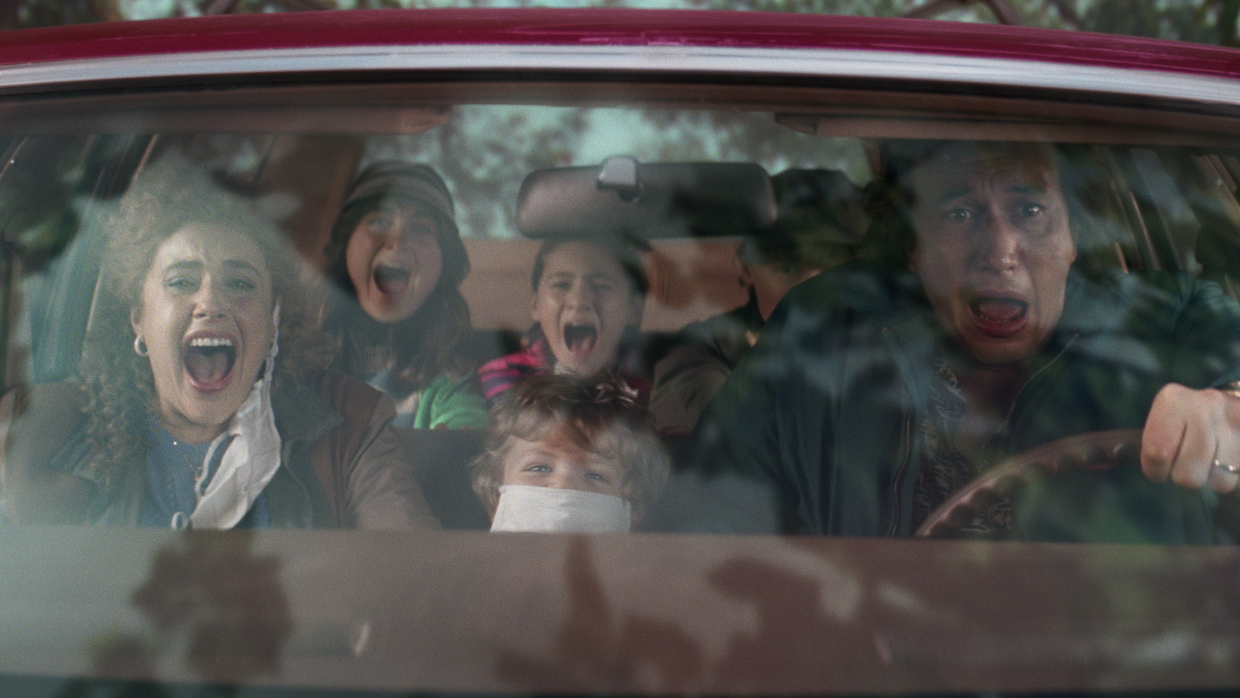 by Daniel Eagan
in Cinematographers, Interviews
on Dec 9, 2022

Don DeLillo’s 1985 novel White Noise was for years considered too difficult to bring to the screen. With its jaundiced view of academia, intimate domestic melodrama, obsessions with cults and an eerily prescient pandemic, the novel spans genres and styles.

Working for the first time in his career on an adaptation, writer and director Noah Baumbach started shooting primarily in the Midwest in June 2021. Starring Adam Driver, Greta Gerwig, and Don Cheadle, White Noise premiered at Venice and opened this year’s New York Film Festival.

This is the first collaboration between Baumbach and cinematographer Lol Crawley, BSC. They faced enormous challenges, including staging an “airborne toxic event” that envelops a small town, capturing a Godard-worthy traffic jam that extends into a rainy night and an evacuation from a Boy Scout camp that devolves into full-scale chaos.

Crawley’s career encompasses music videos, television, and features that range from biopics like Hyde Park on the Hudson to challenging experimental stories like Vox Lux. He spoke with Filmmaker at this year’s EnergaCAMERIMAGE after a screening of White Noise.

Filmmaker: What’s your impression of this year’s Camerimage?

Lol Crawley: I am absolutely struck by the energy of the predominately young audience, also the way they embraced going to the cinema. I mention age because I hope that post-COVID, and with the rise of streaming, going to cinemas will continue. Viewing habits shift, theaters have closed,. It’s really important to me and all of us here that going to cinemas continues. That’s the impression I got this year—people clamoring to get in and find a seat, even sitting on the stairs. It’s just a joyful passion here.

Filmmaker: White Noise is a Netflix production, which is a bit of a quandary.

Crawley: But Netflix is supporting a cinema release for this, perhaps more limited than in earlier days. Then again, they’re supporting a lot of auteurs and independent filmmakers that previously may have found it difficult to get a film made. It’s a double-edged sword.

Filmmaker: Let’s talk about how you worked with Noah Baumbach. How detailed was the prep? How much did you break down the script?

There’s an evacuation scene as they leave the Boy Scout camp which required a lot of second unit work. You don’t think of Noah’s films as having second units or large stunt sequences. I think it’s fair to say there is a tonal shift that occurs as the movie leaves domesticity and heads out on the open road. That leads all the way to the scout camp, and from there to a chase through the woods to a scene floating down a creek.

These were huge setpieces that could have been broken down any number of ways. The reality is, we achieved them every way we could, although we didn’t really do green screen. Some was shot on location. Obviously, the references to the outside world, the remnants or aftermath of the accident, or the accident actually happening were shot on location.

Filmmaker: I couldn’t figure out how you shot the car scenes. There are these intimate moments at night in the rain with five characters inside a tiny station wagon.

Crawley: The vast majority of the driving stuff was shot on volume. We worked in a warehouse distribution center with an LED screen that was maybe a hundred feet wide and 25 feet tall. We had array footage from some six or eight cameras. The hero car was static on the soundstage, with the volume 20 to 40 feet back. Cars in the other lane were picture cars on a cable that were dragged forwards and backwards on silent electric lifts. When the picture cars start moving and the rain comes on, the illusion is complete.

Filmmaker: How did you do that first car shot when the Gladneys leave their house?

Crawley: The 360 shot inside the car? Very early we were wondering how to attack this. Blue screen? Process trailer? LED screens? We had young kids at night, which added constraints to shooting practically. Ultimately what happened was we carved it up a number of different ways.

So, it’s shot at night on a practical location. The 360 was done in what’s called a pod. It’s the actual car, one of five “hero” cars we had. The wheels make contact with the road, but it’s driven with a remote steering wheel on top of the vehicle. We also cut the roof out of the car. We had a camera we could direct downwards that had an inverted prism. So, it didn’t take up too much space. It was on two sets of sliders so Erin Henning, the camera operator, could move on two axes: left and right, up and down.

The tricky thing was trying to light for driving down a rural road at night and then hitting traffic. We rigged LED lights around the vehicle that we could adjust to make it seem like they were passing by lights. When we were shooting the front of the vehicle on the sound stage, we had two steel pipes with lamps propped up against the back. You never see the lamps, but through the course of a take we could adjust the light so it feels like cars are getting closer.

Crawley: Yes, of course. Also the sequence in the supermarket at the end. Noah sort of tips from coincidence and synchronous behavior into a very obviously choreographed song-and-dance number. There is a Godard movie, Tout va bien, that tracks along the same way, although it’s more a comment on consumer society. I love that end sequence, especially the moment where you can’t quite decide if this is happening the way it looks. There’s an ambiguity. You see clerks opening bags at the checkout and you’re like, “That’s odd. Are they doing it together?” Then it becomes guys on shopping carts spinning around and stuff, more like a Busby Berkeley number, or Singin’ in the Rain.

Filmmaker: I’m curious about how closely detailed your prep is. There’s an early montage of Adam Driver and Greta Gerwig walking down a sidewalk. Was that all shotlisted? Or did you grab shots to assemble later?

Crawley: There’s not really any grabbing with Noah. It’s on the page, there to be executed. He likes to work with a single camera. Not a lot of second unit stuff, because his films haven’t really demanded it. For this one, by necessity, we had to have B cameras, second units, Steadicams, storyboards, the whole gamut. So, a lot of preplanning. There would be moments where you are like, “What about this?” Or, “Isn’t it nice how this occurred?” Then we would respond. It’s not rigid to the point of what it would have been like shooting for Hitchcock.

Filmmaker: But you keep it organic. There’s an early breakfast scene where all the kids are moving and talking through the kitchen.

Crawley: The dialogue there is pretty faithful to the book. I like the fact that the characters have their own conversations, all their non sequiturs. That’s the white noise of it, all the chattering on top of each other. It’s like that in the cafeteria in the College-on-the-Hill.

Filmmaker: Viewers can interpret the talk as white noise. Is there a visual equivalent?

Crawley: Yeah, sure. I think of that shot in the supermarket that was inspired by Andreas Gursky. It’s visual overload; it’s hard to see the wood for the trees, hard to focus in on something. Another example is the shot in the Boy Scout camp that was inspired by Notorious. We start wide as they’re bedding down for the night, come down and focus in on a white pill in Greta’s hand. That was Noah’s explicit intention, he wanted this idea of too much information—what am I looking at—like it’s a “Where’s Waldo” bit.

Filmmaker: Why did you decide to shoot on film, not digital?

Crawley: Noah had decided that before I came on board. This is an adaptation of a 1985 novel. Noah felt it was important that we capture the feel of the ’80s. You can recognize that the aesthetic owes a debt to Adrian Lyne movies, Michael Mann movies. Also Spielberg, Close Encounters. It felt like an obvious choice to shoot on film with anamorphic lenses.

Filmmaker: Two shots really struck me. One is a slow push in on Driver and Gerwig in their bedroom at night. They’re both crying, and you end in tight. Did you have to hit beats of dialogue?

Crawley: I seem to remember it just flowing. I know that sounds unlikely, but it just seemed to flow.

Filmmaker: What about that shot on the freeway which pulls back from the Gladneys and then ends up peering down at this nightmarish traffic jam?

Crawley: It’s all off a Technocrane. It’s extended out all the way, then we’re tracking back and pulling in on the arm. Then it lifts up at the end, becomes this elevated, very Spielbergian moment. I remember the choreography, getting all the timing, but also being in a wet, cold, night condition. It’s another thing entirely if it’s the first thing in the morning and you’re in the supermarket and, “Hey, this is fun.”

Then you have scenes like the camp evacuation, a massive exercise with these complex gags. Adam gets hit, a car is hit by another, that car gets hit, guy falls over. I mean, let’s give credit to the second unit. That director was a stuntman, he would bring all these ideas.

The problem was we were trying a technical exercise while still keeping a sense of freshness to it. You don’t want it to feel so orchestrated that it’s happening on purpose. You want to feel like it’s being caught. You know, like “I had no idea that was going to happen” rather than waiting for a gag to land.