Cinema Is Dead and We’re All Its Ghosts: 2022 at the Movies 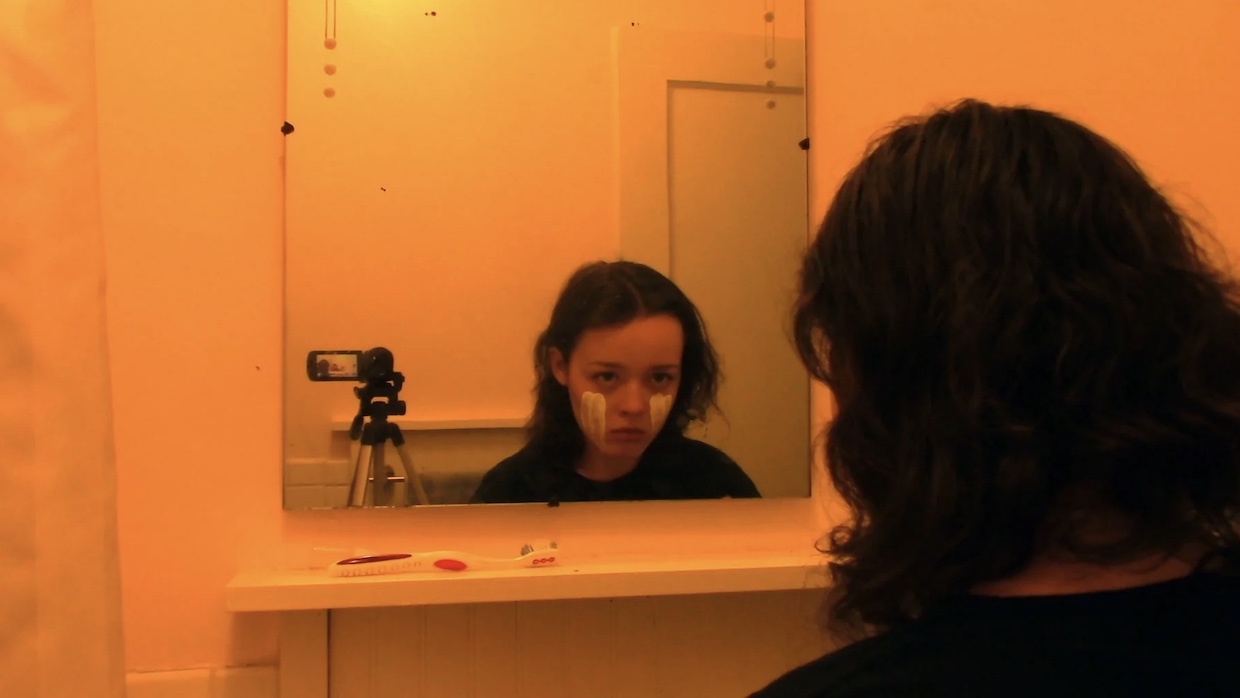 Anna Cobb in We're All Going to the World's Fair

Aftersun, All the Beauty and All the Bloodshed, Casa Susanna, Crimes of the Future, Jackass Forever, Nope, Saint Omer, The Eternal Daughter, The Fabelmans, The Super 8 Years, We're All Going to the World's Fair

The overwhelming proliferation of digital images, recorded by consumer-grade digital cameras with ever-greater resolution, storage capacity, and ubiquity, is the story of the century. Such images are ammunition in the war for attention between big screen and small—as home viewing supplants theatrical exhibition, they are a readymade archive for the streaming glut, padding for true-crime, tabloid-revisionist, and quick-turnaround SEO-backfill docuseries, often directed by brand-name filmmakers who no longer bother to watch all their own footage.

But really, when I say there’s a war for attention between the big and small screen, increasingly I must be describing not your choice to go out to the movies or to watch something at home, but rather the movements of your eyes between the television screen in your living room and the phone in your hand.

The “archival turn” in modern life happens so fast, and so frequently, that it makes your head spin, so I don’t think it’s a coincidence that most of the really notable films of the year were made by filmmakers who look, really look, at their own home movies and personal archives. Their inquiries take the time to insist that, as we are always making images, we are always making meaning, and making art.

In her autofictional books, Annie Ernaux often uses the device of describing an old photograph of herself, objectively narrating the photo’s appearance, withholding an “I” as she scours the surface of a subjectivity that’s trapped inside the picture and inside the past, both her and not her. She repeats the trick, in a way, in The Super 8 Years (co-directed with her son, David Ernaux-Briot), musing over reels of old family photos taken from 1972 to 1981. The family moves, the boys age, the world changes. As in Ernaux’s books, the “I” she once was was a version of herself more connected to France’s rural past, to poverty, to a Leftist political idealism which in The Super 8 Years is overwhelmed by the stuff of bourgeois life: Christmas toys, home furnishings, ski gear, all rendered in the saturated hues of the camera, itself the ultimate achievement and indulgence, its every captured image an implicit celebration of the accumulation of swaddling consumer comforts.

Ernaux is one of the great observers of life in Paris’s postwar commuter suburbs, along the RER B line—also the subject of Alice Diop’s We, in which the French-Senegalese Diop family’s own home videos from the turn of the century, with that bone-familiar pixelated picture quality and telltale Camcorder date stamp, demonstrate an immigrant community’s life at the periphery of the collective noun. In Diop’s Saint Omer, her authorial stand-in Rama (Kayije Kagame) lectures in a university classroom far more glamorous than anywhere Ernaux ever taught; yet her “I” is still elusive, as Ernaux’s is—her I is, perhaps, an Other. When Rama attends the trial of a French-Senegalese woman who drowned her baby (as Diop attended the sensational trial on which Saint Omer is based), she is overwhelmed by the evidence of a subjectivity that she both does and does not share with the accused. Using real trial transcripts, Diop goes over the archive forensically, finding an intellectually ambitious immigrant’s dual consciousness and a mother-daughter bond mirrored in Rama’s memories of staged-for-the-film Camcorder footage that looks eerily like We’s real home movies.

“I don’t ever want to lose the real memory of anyone again,” writes Nan Goldin in her introduction to The Ballad of Sexual Dependency, dedicated to her sister Barbara, who killed herself when Nan was 11. The snapshots of The Ballad, with its ratty glamour, punkish fellow-feeling, romantic degradation, substance abuse, untimely death and timeless posing, form a chosen-family album, a Fassbinderian riff in response, and ironic counterpoint, to the Goldins’ Sirkian blood-family album revealed in Laura Poitras’s All the Beauty and the Bloodshed, with precious pictures of young Barbara trapped inside the postwar domesticity that stifled her subjectivity to death. (Another image trove finally unrepressed: In Sebastian Lifshitz’s documentary Casa Susanna, photographs taken at the eponymous transvestite enclave in the Catskills see the light, for the first time in decades, too late to ruin or save anyone’s life; the subjects, in the department-store furs and heels and updos that were the uniforms of their real, hidden lives, exude an ironic glamour, their own Sirkian language of heightened style and stifled expression.)

Joanna Hogg, who scrapbooks her own student films in the aptly titled Souvenir diptych, made The Eternal Daughter, a ghost story about a filmmaker trying to commune with the spirits of the past—“Julie” (Tilda Swinton), her familiar filmmaker alter ego, brings her mother back to a place she used to know well, hoping to wring forth stories, and revelations, before it’s too late. And the parent-child bonding trip in Charlotte Wells’s Aftersun featured, as Saint Omer did, turn-of-the-century camcorder footage; in glitchy and washed-out images purportedly captured by his onscreen daughter, the character inspired by Wells’s late father is rendered through the visual detritus, the artifacts, of an obsolete format, conjuring a past that is simultaneously close enough to touch and too far away to reach, like the images of long-ago vacations and a now-former husband flickering through The Super 8 Years.

So many ghosts of cinema: Annie Ernaux’s ex, Nan Goldin’s sister (and everyone else), Joanna Hogg’s mother, Charlotte Wells’s father, Alice Diop’s parents. There is room around the Ouija Board for one boy: young Sammy Fabelman, who finds himself, and loses his image of his parents, in his own home movies. The Fabelmans, in that wonderful camping-trip editing-table sequence in which Sam discovers his mother’s emotional infidelity, locates of the primal scene of the entire apparatus of American blockbuster filmmaking in Steven Spielberg’s own Super 8 years. The emotional core of mainstream American narrative as we’ve known it—the sense of kinetic excitement, wonderment, terror and reassurance, the emotional manipulations centering around the separation and reunion of onscreen nuclear families that were for a half-century taken as the universal—is traced back to a single Baby Boomer who, like the Ernauxs, was given a new toy to play with just as his family started to make some real money, and obsesses over yet another of 2022’s private photographic archives of yet another of 2022’s on-screen family vacations, trying to find the moment where it all went wrong.

The next Sammy Fabelman is finding, or losing, or inventing herself online, in a strange new world of user-generated content. In Jane Schoenbrun’s We’re All Going to the World’s Fair, a screenshare odyssey for a world of context collapse, teen Casey (Anna Cobb) pokes around a dark web of online rabbit holes, memes, creepypastas and found footage (but lost by who?!?), which she absorbs with a benumbed poker face familiar from all the times you’ve seen a Zoomer blankly typing something into their phone that turns out to be a tweet saying “iM fuckin sCrEaMiNg omgggggg” or something. Especially given that Fabelmans ended up on VOD more quickly following its premiere than World’s Fair, Casey’s older online interlocutor/mentor/predator, who is unsure how seriously or ironically to take her, could be a stand-in for the entire terminally sincere Spielbergian apparatus of celluloid film and theatrical exhibition and the monoculture blockbuster, stepping aside in befuddlement to World’s Fair’s discomfiting self-curated feed of digital scraps and impenetrable inflections. (Though, allow just one more run on the collapsing collective image bank: in Nope, the neo-Spielbergian Jordan Peele has his characters, mostly not white, narrate their own close encounters with notoriety, preserved in footage—of old Westerns, of sitcoms—that they mostly do not own. It takes hand-cranked IMAX, a fantasy hybrid of personal and universal filmmaking if ever there was one, for a family with “skin in the game” since pictures could move to finally make their own home movies.)

This year also saw the continuation of one of the defining artworks of the digital century: Jackass Forever furthered the legacy of a show and film series which use digital cinematography to capture the antics of a group of friends looking gradually the worse for wear, and glimpses of its early, grainy camcorder days, like Alice Diop and Charlotte Wells’s home movies, take on the poignancy of a tattered family photo album. Jackass emerged in the rough-and-ready early days of prosumer DV, though its roots and inspirations go even further back, to a world of amateur skate videos traded virally in the years before YouTube—which, like all the major video platforms that emerged in the same decade that Hollywood shifted from film to digital, was seeded from its earliest user uploads with imitation-Jackass clips. As such, one of the near-death experiences captured in the Jackass cycle is that of cinema itself.

Crimes of the Future, like Jackass, concerns a silver fox filming his own self-mutilations—as Saul Tenser, Viggo Mortensen has Johnny Knoxville’s electrified hair and well-weathered visage (and his performance is palpably affected by a very Knoxville-like off-set injury: he was struck by a runaway horse). Saul embraces as the jackasses do his own decay and decline, filming extractions of the “neo-organs” that grow in his body like tumors—the ultimate in user-generated content.

Saul suffers from “Accelerated Evolution Syndrome,” but there’s always been something post-human about the well-grooved, neutral line readings Cronenberg favors. I choose to find it hopeful that Crimes of the Future ends with Saul grimacing in what may as well be passion as his body transubstantiates synthetic material into nutrition. His face is pained but ecstatic, and the image is digital, in scuzzy, blotchy and black and white—the entire thing is being filmed by Saul’s partner on a low-res fisheye-lens personal camera, small enough to fit on a ring. Cinema’s not dead, it’s just undergoing a state change.

Happy New Year to one and all.