“We Underestimated the Violence of the Regime”: Lina on 5 Seasons of Revolution 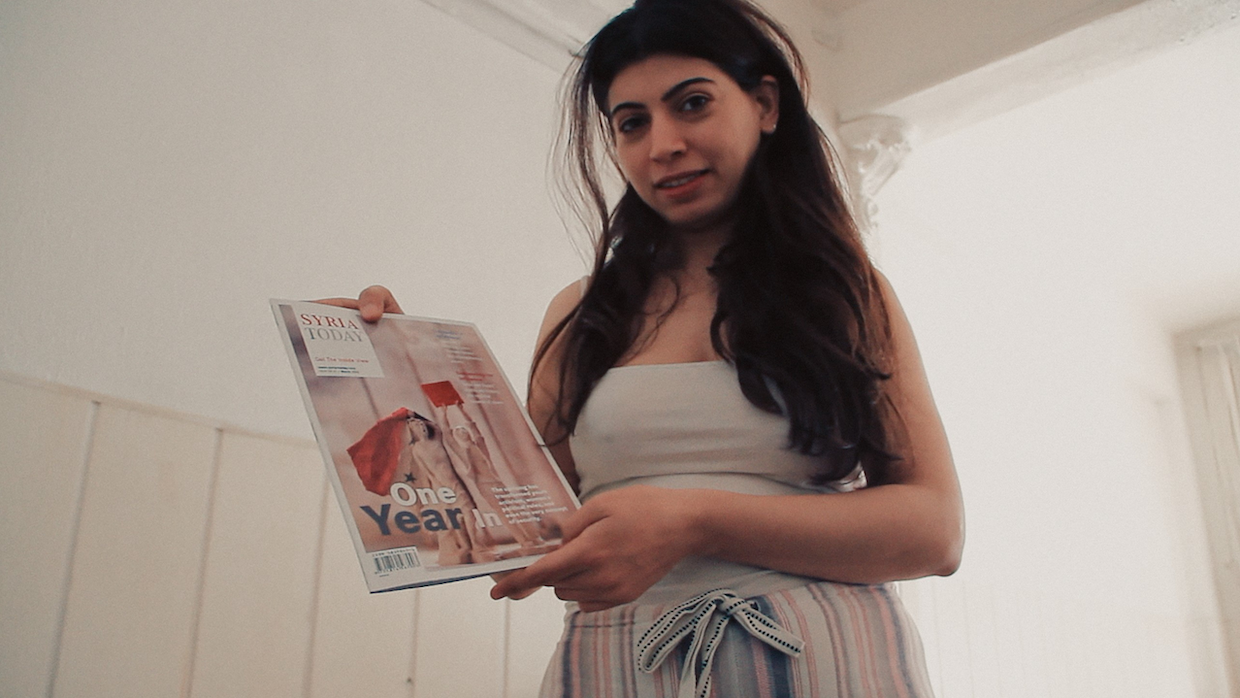 by Lauren Wissot
in Directors, Interviews, Sundance
on Jan 25, 2023

Like most conflicts heavily documentedby Western media, the ongoing Syrian civil war is one in which nearly all nuance has been left on the cutting room floor. Fortunately, Lina’s 5 Seasons of Revolution, a revelatory Sundance debut from a Damascus video journalist who (for safety reasons) goes simply by her first name, shatters the trend. Currently based in Europe, Lina spent 2011-2015 filming her country’s path from high revolutionary hopes to ultimately shattered dreams. But even more importantly, she did so in the most personal and truthful way, by turning the camera on herself and four of her closest friends—all educated, anti-regime, cosmopolitan twentysomethings in the capital city (and al-Assad stronghold) who find themselves surrounded by folks who’d just as soon look away. Until, of course, they—along with the rest of the world—could not.

With the help of documentary heavies like producer Orwa Nyrabia and EP Laura Poitras, Lina has transformed that material into the most poignant of coming-of-age tales. To learn about her journey from college grad to accidental war journalist, Filmmaker reached out to the director soon after the film’s Sundance World Cinema Documentary Competition premiere.

Filmmaker: Even though this film takes place over four years,  it was a decade-plus in the making. I know this allowed you the distance you needed to reflect, but you’ve also noted that even after filming was over the story and the characters kept developing, the situations shifting. Can you elaborate on this a bit? Were there protagonists and scenes you would have included if not for security considerations?

Lina: As I set out to make a film, my main focus was documenting my young women comrades as activists and revolutionaries. Next to this, as a journalist, I documented many other stories. Then, what I thought or hoped would be a few weeks of protests lingered, and weeks became months and years.

During this time I traveled across the country, where I was met with different stories and realities; I saw how this has challenged the unity of the opposition. And slowly a dynamic also emerged between me as a filmmaker and as a journalist. During all these years I recorded one arrest after the other within our group, but I also documented what was happening to the larger community of the opposition. Years later, as editing started and we screened the footage, some patterns started to emerge in front of my eyes. For example, I realized that I had been recording testimonies from people, and this became part of the story. At another point I saw a younger version of myself that I no longer was, an enthusiastic revolutionary and a journalist who chased the frontlines with no time to reflect. In the editing room ten years later, this reflection became the film. And indeed, many aspects to the characters, who are my friends, I would have included if I could have. But to ensure their safety I decided to tighten the frame, to exclude certain events, in filming and in editing, that would potentially identify them. That alone was a painful and hard process. At times I felt I was not doing them justice.

Filmmaker: So how did Orwa Nyrabia become involved as a producer, and also Laura Poitras as EP?

Lina: Diana El Jeiroudi, my lead producer, always produced together with Orwa Nyrabia as a couple, so Orwa was involved from the very start of my project in 2011. Then later, as we all had to leave Syria eventually and resettle in Europe, the project developed into an international co-production. Both Torstein Grude (from Norway) and Ilja Roomans (from the Netherlands) came onboard as well.

I actually met Laura for the first time back in 2012, when I participated in a workshop with my project. I soon got to know her and admire her film work. As the project developed, Diana and I thought we needed a strong female filmmaker that we both admired and respected to champion the film as EP. Luckily, Laura has welcomed and supported us profoundly ever since.

Filmmaker: You’ve also mentioned that you and your friends never saw any of this massive upheaval coming—indeed, would have laughed at the notion back in 2010, which made me wonder if this blindness might just be a product of being cocooned in an educated urban environment. (I’m sure that the idea that Russia would launch a full-scale invasion of Ukraine in 2022 would have seemed equally absurd to the folks I met at Docudays UA in Kyiv back in 2018.) Any thoughts on this?

Lina: Ultimately, I was motivated to make a film about change and about making change. I wanted to document how we believed in this change. Like Rima says at one point, “I am certain change is coming to this country and that it is a change for the better.” But yes, me and my friends were an educated urban group as you’ve described and were indeed privileged, and this meant we underestimated the level of desperation of the people across the country outside the privileged capital. On the other hand, I also wonder if it is not human nature to have a false sense of security, believing that terrible things happened or could happen to others but not to us. But the truth is we underestimated the violence of the regime, and among other things how protected it was by international powers. I think it is easier to look back now in retrospect and make sense of that. However, when I was filming events as they unfolded, I think there was little chance for people like me and my friends in our 20s to see how the story would develop. What the film attempts to do is take the viewer on the journey of what we went through: from the position of having to make life-changing choices when you don’t know what will happen next week to the clarity I had later on once I could look back, reflect and try to make sense of the shocking unfolding of events.

Filmmaker: The fractionalization of these friendships likewise works brilliantly as a stand-in for the dissolution of Syria itself. But young friendships inevitably change as people grow up. So have you tried to separate what might be termed a “natural progression” from the shared experience of having lived through revolution and war?

Lina: In Syria we say, “A true friendship is tested by a quarrel.” In 5 Seasons of Revolution, my friends and I had a painful yet unique opportunity to deepen our bonds far more than one would normally have. Yes, we did have heated disagreement, fractions in opinion, and we chose different paths. However, as I was filming, and later revisiting the footage, it became clearer to me that we bonded beyond friendship, as comrades and as allies.

Filmmaker: So have any of your characters seen the final cut—and if so, what’s been the reaction? Did you involve them in the editing process along the way?

Lina: You can say the characters were present with me all the time. It took years, and was a long and painful process, for me (and my editors and producers) to get the self-censorship out of my head. I was prioritizing my characters’ perspectives at every turn, even regarding minute details, to the extent that it was severely hindering the film’s progression. Only later in the editing was I finally able to not only liberate myself from this self-censorship, but also give in to the discovery that I was inherently at the center of the story. This in turn helped to incorporate their perspectives into the film’s narrative in a way that was enriching rather than inhibiting.

When we reached a semi-final cut, we invited the characters to view the film; it was a very emotional and important experience for all of us. I received a few requests from them that I felt were meaningful. I’m quite happy those adjustments were honored and made it into the final cut.