PERSON OF INTEREST: OFF THE GRID 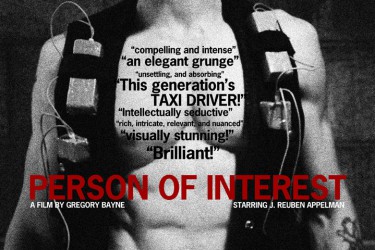 I’ve met and talked with filmmaker Gregory Bayne at a couple of events, including this past Summer’s The Conversation, and have admired his tough-minded, perspicacious approach to distributing his feature Person of Interest. So, I was happy when he pitched me a series of posts detailing the movie’s current tour. Here is the first introductory piece. — Scott Macaulay

Volume 1: There is no system. There is only you.

“Listen up, maggots. You are not special. You are not a beautiful or unique snowflake. You’re the same decaying organic matter as everything else.” — Tyler Durden

Filmmakers have an interesting disposition. Our art is rarely fully our creation. Our art fails more than it succeeds. Our art has, in many ways, devolved instead of evolved. Yet, somehow, and across the board, there is an expectation of respect at the mere notion that we make films. Listen up, maggots. Your film is not special. Your film is not beautiful or unique. It’s the same derivative, low-rent digital garbage as everything else.

There is no system. There is only you.

This sums up my collected thoughts on the current state of independent film after a year of listening to, engaging in, and then stepping away from the never-ending conversation on the current state of independent film. At a time when it seems filmmakers are retreating into their respective camps — to the left we have something resembling an AmWay meeting, and to the right a gathering of the class of 1910 — it occurs to me the only thing to do is head for the door and go it your own way. We are, after all, independent. Right?

You see, I like everyone else in the room, have a film. I think it’s a good film. It’s a film that people seem to like after they watch it. It’s a film probably much like your film, in that it has no recognizable actors, was shot for very little, (or shall we say “no” money), and yes of course, it was shot digitally. We probably also share in a lack industry or festival connections, or a marketing budget, or people who actually care about our films. We don’t have sales reps, or publicists, or rich uncles. It’s just us, and we’re in the same dismal-looking boat, but you know what, it doesn’t matter. The film is good, and all we have to do is get out there and show it to whomever will take the time to watch it. Right?

Well, that’s the idea, at least.

My film is Person of Interest. It’s a dark little journey of a film, that represents a nearly 3-year commitment (so far) for myself and my collaborator, J. Reuben Appelman who wrote, and stars in the film. It’s the story of Terrance Dyer, an Iraq-war veteran, and self-proclaimed American Patriot, who believes himself to be a pawn in an conspiracy on the part of the government to blow up a building on US soil. With this backdrop the film unravels as an intricate character study into the mind of Dyer who appears to be fighting a losing battle with Post Traumatic Stress Disorder and making moves that seem to parallel that of a would-be terrorist.

It’s a film that contains exactly one laugh — two, if you’re of a certain sense of humor. It’s claustrophobic, non-linear, and requires attention. When it’s over, the general audience reaction is dead silence. And, though viewers have described it as “this generation’s Taxi Driver,” or “Brilliant,” or have made statements such as “I can’t think of another film that so effectively sees the politics of our age through such a personal lens.” At the end of the day, J. and I have a very small, somewhat challenging independent film on our hands, and the writing is on the wall. If anyone is ever going to see this, it’s up to us to put it in front of them.

This post represents the first installment chronicling our (very candid) journey to do just that.

After completing the film in May of this year we immediately put it online, streaming it for free at our site. This move lead to nearly 300 people from around the world clicking through to the film, our first wave of positive reviews, and some invites to screen the film around the country. Now these weren’t invites to major festivals, or even the less major festivals, they were to screening events happening off the grid, in small places. Hotels, coffee shops, and universities. Suddenly, it was clear. The road ahead would be a campaign. And, like all campaigns it would start in small places, in direct contact with people, and would take time to build on its own steam.

You see, we are not special. We are not beautiful or unique. We are simply another face in the crowd…until we’re not.

In this moment, it seems there are more people talking than doing. There is more theory than action. And in the midst of all this noise, so little of it is actually applicable to you, or I, or the rest of our cohorts in this low-rent indie bubble. So, as others are agonizing over the “what to do” and “how to do it,” you’ll find us heading out the side door, film under arm, going it our own way.

We’re taking Person of Interest off the grid and into the world through whatever means we can. You are more than welcome to join us. We promise to share all we learn, and will pull no punches. As the saying goes…we have nothing to lose, and everything to gain. — Gregory Bayne, Producer, Director, Person of Interest

Next up: Fear and Loathing in Los Angeles. The CINEFIST Screening Part 1.