CLAUDIA LLOSA, “THE MILK OF SORROW”

by Brandon Harris
in Director Interviews
on Aug 25, 2010 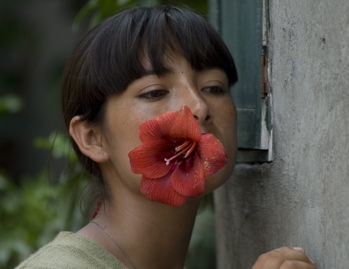 For Claudia Llosa, director of the Berlinale-winning and Academy Award-nominated Peruvian film The Milk of Sorrow, magical realism isn’t a literary genre or filmic device, it’s an element of national identity and consciousness. Her film, easily the most critically-lauded film to emerge from Peru, is set in the rough-hewn mountain settlements on the outskirts of Lima. It concerns a young Peruvian woman (the captivating Magaly Solier) who, having contracted a mysterious disease that is passed on via breast milk to the daughters of rape victims taken by soliders serving Peru’s deposed terrorist regime, sets out to bury her newly deceased mother. Her uncle, with whom she lives, is about to marry off his rather bone-headed, carefree daughter and wants no part of paying for a burial. He suggests she simply bury her mother in his backyard. Aware of her mysterious disease, he accepts it matter of factly. In one of the single most unsettling scenes you may see in a cinema this year, he tries to explain to a doctor the folkloric disease which afflicts his daughter. The young woman, who is prone to nose bleeds, muteness and bouts of fainting from the disease, begins to work for a wealthy, blonde classical pianist in Lima who treats her dismissively. However, as she receives a rude introduction to the world of elite Peruvian musicianship, the movie toys with the notion that something may come of her hauntingly beautiful and profanely lyrical singing, the only coping mechanism that the victims of the state-sponsored sexual torture have to rely on.

While she draws upon influences ranging from the high European modernism of Antonioni to the short filmography of Barbara Loden, her film most clearly suggests a clever re-imagining of Todd Haynes’ Safe set amidst an altogether more violent and troubled South American milieu. Never failing to worm its way under your skin, The Milk of Sorrow is a potent and unforgettable film, one which challenges you to engage with it on its own terms and, like the very best cinema, seems to build its visual language from the ground up; you’ve never seen anything else like it.

Olive Film opens The Milk of Sorrow Friday in Manhattan. 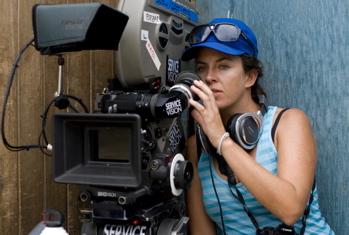 Filmmaker: The film seems to draw heavily from Harvard anthropologist Kimberley Theidon’s Entre Prejimos, which delves into the lives of women who were raped by soldiers during Peru’s civil war. How much did you draw from the book in making this film?

Llosa: I cannot say that the film is an adaptation of the book. Actually “Entre prójimos” is a work of research that compiles many women’s testimonies regarding the terrorism conflict. Only one of hundreds of these testimonies did mention the “teta asustada” syndrome. But even that story has nothing to do with the film, which is totally fictional. But what struck me then, was that I had no idea of this situation, and neither most Peruvians. Moreover I was completely captured by the idea of how Andean peoples communicate about themselves through their myths, singing and dances. This belief about how war can be transmitted as an illness, generations through generations, is a mechanism to talk about what happened and to start a process of symbolic healing.

Filmmaker: How did you balance the naturalistic elements in your story of modern Peru with the magic realist notion of the tainted breast milk of Sendero Luminoso’s rape victims passing on mysterious disease?

Llosa: What for many was foreign – therefore rare or enigmatic, due to the differences of language, culture, etc., was unconsciously recognized and understood with the logic of the senses. And what is magic and beautiful is that without the need to decipher everything, the viewer can connect on an emotional level with symbols, images or singing.

Filmmaker: The film has an incredibly sensual quality; What were some of the main aesthetic conceits you were interested in exploring?

Llosa: It is a fractured film, dismembered from the very beginning. This choice comes with the narrative of the history, the thesis, and the risk of wanting to do it.The first scene, (the death of the mother) already marks this intention. It only has three shots, and is extremely elliptical. From the beginning we knew that we were in a risky zone, but we went for it. The narrative and aesthetic of the film must never interrupt the process of the viewer, but what matters is the choice of the filmmaker and the why he/she chooses it. In my case, I wanted to take the difficult path, not an asphalted surface, dusty, arid and solitary. All of this composes the road of the history, the history of Fausta.

Filmmaker: How do you prepare? Do you shot list and storyboard or do you try to find the visual style as you go along?

Llosa: I usually work on a very detailed visual treatment before I start preproduction. This includes all concepts: color, framing, rhythm, visual storyboard ( very simple drawings done by myself of key scenes.) I am usually not driven by characters, in which case I prefer not to think of before rehearsal). I save all kinds of photo references during the writing process and then make a kind of sketch diary for each scene. I also write down all the analysis for directing actors on that same album-dictionary, as I like to call it. The goal is to remember ideas, atmospheres, and directions and save them like a bible during the whole shooting. But the funny thing is that while I’m shooting I never open it. I really don’t need to, because I had memorized all the ideas that I really love, and the ones that I don’t remember, I just let them go.

I need this as a safety net, I suppose.

In the case of The Milk of Sorrow I must say that I had and amazing crew, we all ended up improving ourselves because of this synergy. That’s very important.

Filmmaker: One thing I think the film effectively explores is the forced passivity of women in patriarchal cultures. Magaly Solier’s character is constantly being acted upon, but has little agency of her own. How did you make her dynamic as a character while portraying this social circumstance with honesty?

Llosa: To speak about experiences associated with extreme violence, the sexual violence, it is not an easy thing. Suffering and fear, lived silently, with shame, “as if it was a fault of one”. It creates a fingerprint that generates other pains associated with the fact of being a woman in a context of arbitrariness and mistreatment. I share the idea that the task of opening spaces, to think, is the only way of facilitating the dialogue on a topic that brings so much pain, and this film was conceived as a search of healing.

Filmmaker: What’s the financing situation in Peru? Is it more difficult to raise money for films that are critical of Peruvian society?

Llosa: Conacine is the National Council of Cinematography of Peru. It handles a budget of US$ 500,000, given as awards for 4 Peruvian feature scripts, after a very difficult process of selection. Conacine is the only Peruvian fund supporting cinema, and European Co-production a crucial route of financing for a Peruvian filmmaker. The union is now working on a new law that triplicates the government support, but the process has been really difficult and they are still in the fight.