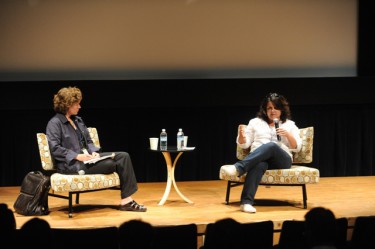 Here is part two of Rachel Libert’s diaries from the Sundance Labs. Read part one here.


The busloads of people arriving at the Sundance Resort for the Creative Producing Summit signaled the end of the Creative Producing Lab. Twenty narrative producers, twenty documentary producers and dozens of high-level industry representatives are sequestered in the privacy of the Wasatch Mountains. We’re participating in an information marathon. We are a think tank in which our collective brainpower evaluates the industry and its future. For the Documentary Creative Producing Lab fellows there’s a palpable shift from our tight knit group discussions about the impact of our films to the business of financing and distribution.

Like many documentary producers I am also directing my project along with my co-director Tony Hardmon. When I’m with other documentary filmmakers our conversations gravitate toward subject matter and production anecdotes, not line items and complex financing models. The business focus of the Summit provides a much-needed opportunity to do a check-up on our projects.

Several pieces of advice resonate with me. The first is that we should include outreach as a line item in our documentary budgets in the same way that narrative projects include P&A in their budgets. Earlier in the week filmmaker Jennifer Arnold coined the term “Documentary Famous”. She described jetsetting around the world with her film A Small Act but reminded us that she doesn’t get paid for much of it. It sounds obvious but many of us are so don’t consider the financial strain a festival run places on the filmmaker. You also need to make sure that you budget and fundraise through completion. With dwindling acquisition fees you don’t want the cost of your prints, masters and dubs to come out of this money. Finally, it’s important to negotiate all of your music clearances and archival rights before you finish the film. Several people shared stories of great films whose release was halted or delayed by exorbitant outstanding music clearances. You are in a much better position to negotiate a reasonable rate before your film has premiered at a festival.

Several of my fellow Documentary Fellows had told me about their conversations with Wendy Levy of BAVC. (Bay Area Video Coalition) They spoke excitedly of video games and avatars and dashboards, and I didn’t understand how this related to documentary film. Then I met Wendy and I got it. BAVAC is designing a range of tools that not only promote our films but also create additional content that stands on its own as a powerful interactive experience. These things are not just nifty gadgets but actual tools that can be more attractive to a funder than your film since their impact is much more measurable. More importantly, it opens up exciting possibilities for storytellers to reach beyond the traditional outlets. 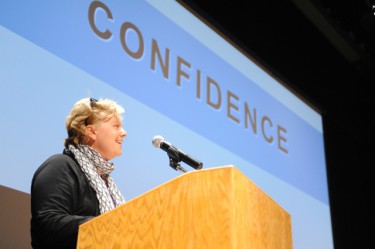 On our last night small index cards were passed out at dinner posing a simple question: “Besides money, in a single word what does it take to produce a film?” Of course this sparked a hilarious brainstorming session at our table including suggestions of vodka and Viagra. Our answers were incorporated in the evening’s event in which several panelists spoke about their words. Independent film producer Mary Jane Skalski chose the word “confidence”, and then she highlighted another word that still resonates with me: “somehow.” She elaborated, “as producers we often say ‘somehow it’ll work out’ and the ‘somehow’ is often the producer.”

That hopeful word, “somehow” is the thing that sustains many of us. — Rachel Libert, Co-producer, co-director, Semper Fi: Always Faithful.