WHAT I’M LOOKING FORWARD TO IN TORONTO

Toronto, the IFP Filmmaker Conference hot on its heels, the New York Film Festival, and, for us, the close of our Fall issue — the season has begun. We’ve already begun work on the magazine, and I’m getting ready to go Toronto, where I’ll join Howard Feinstein and Livia Bloom contributing to the magazine and blog.

Of course, the best part of any festival experience is the serendipitous discovery, the word-of-mouth gem you were tipped to or the film you randomly walked into that turned out to be great. I hope to be telling you about some of those over the next week, but, in the meantime, here are a few films from the Toronto International Film Festival’s 2010 edition that I’m already looking forward to.

I know little about Ming Wong’s Eat Fear other than it’s a remake of Rainer Werner Fassbinder’s Ali: Fear Eats the Soul with the filmmaker playing all the parts. That might be enough for me.

I always find something to love in Jem Cohen’s films; this year, he brings Anne Truitt, Working, a biography of the painter, to the festival.

Beginners, directed by Mike Mills. I read and liked the script for this one, akind of dual story about a man’s relationship with a new French girlfriend (Ewan McGregor and Melanie Laurent, respectively), and his coming-to-terms with his newly out-the-closet dad (Christopher Plummer). Produced by Jay Van Hoy and Lars Knudsen, the film could marry Mills’ style and technical assuredness to engagingly messy emotional subject matter. And, it’s shot by Kaspar Tuxen, one of our “25 New Faces.”

Having long been a fan of Jerzy Skolimowski’s The Shout as well as Vincent Gallo’s work in front of and behind the camera, I’m looking forward to Essential Killing, in which Gallo plays a Afghan Taliban member trying to make it home after the U.S. truck he’s taken away in crashes.

I missed Michelangelo Frammartino’s The Four Times in Cannes and heard good things. From the catalog: “Inspired by Pythagoras’s belief in four-fold transmigration – by which the soul is passed from human to animal to vegetable to mineral, until completely purified – The Four Times is a genre-defying work of cinematic transcendence…” 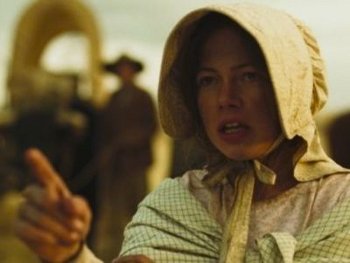 Meek’s Cutoff. With her two most recent films, Kelly Reichardt has become

one of American independent cinema’s major directors. The word from people I trust is very strong on this period frontier drama starring Michelle Williams, Zoe Kazan, Paul Dano, Bruce Greenwood and Shirley Henderson. And, for what it’s worth, I love the title.

L.A. Plays Itself director Thom Anderson returns with Get Out of the Car, a should-be-fascinating portrait of gentrification in the city of Angels.

Hauntings: As part of an exciting inaugural program at the newly unveiled Bell Lightbox will be two films by Guy Maddin based on the idea of lost, abandoned footage; the films will be projected on the building’s fifth floor windows.

Hereafter: Clint Eastwood directing a script by Peter Morgan dealing with the afterlife and near-death experiences? Once again, I am there.

A Horrible Way to Die, Adam Wingard. Ever since 2007’s Pop Skull I’ve been a huge fan of Southern filmmaker Adam Wingard, who has been sometimes been reductively typecast as a genre filmmaker. I’d slot him closer to Gaspar Noe based on his dedication to developing a sensory cinema that replicates the firing synapses of our 21st century brains. Here, the participation of Joe Swanberg and Amy Seimetz (my bet as the next acting breakout from the indie scene) should enable a crossover to a larger audience.

John Carpenter’s The Ward. The horror master returns with a story of a woman going nuts in a 1960s mental institution.

Look, Stranger. I put this film’s writer/director, Arielle Javitch, on our “25 New Faces” this year after meeting with her and watching a section of her film’s rough cut. The film is a challenging one — a minimal, metaphoric tale of a refugee woman traversing battlefields on the way home. I’ve since heard good buzz, and the involvement of star Anamaria Marinca (4 Months, Three Weeks, Two Days), d.p. Mike Simmonds (Goodbye, Solo) and producer Lisa Muskat (George Washington) bodes well.

Peep World. Writer, director, and, in his other life, architect Peter Himmelstein has a sly comic sensibility. I’m looking forward to seeing it applied to Barry Blaustein’s ensemble pic.

Promises Written in Water. Produced, directed, edited by and starring Vincent Gallo, the iconoclastic artist’s return to film after The Brown Bunny arrives with both intriguing word from Venice and a crazy production backstory. I’m a fan, so I will be there.

Jonathan Nossiter has had one of the more unusual careers in American independent film. He’s won Sundance, had mixed success with a European-produced follow-up, and then rebounded with a documentary on wine that drew on his own career as a sommelier. I interviewed him for that wine doc, Mondovino, as his Little Italy apartment was being packed up in preparation for Nossiter’s move to South America. And now he returns with the Brazil-set Rio Sex Comedy. I don’t know much about it, but Nossiter’s films are always smart and unexpected. 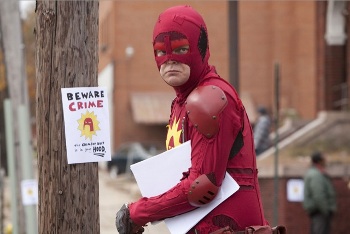 As one of Ted Hope’s Twitter followers I feel like I was on the set and in the editing room of James Gunn’s Super. Even if I wasn’t being teased in 140-character bursts I’d be interested in this one based on the presence of Ellen Page and Gunn’s funny “PG-Porn” series in which he staged comically-SFW vignettes with adult actors and actresses like Sasha Grey.

Tabloid. Much has been written recently about Siskel and Ebert’s At the Movies due to the demise of the lesser-version that spawned after the two Chicago critics departed the balcony. But growing up as a young cinephile, At the Movies was both lifeline and study guide. Yes, they had to review all the cineplex stuff, but both critics were passionate about working in all their off-the-beaten-path favorites. For Ebert one was Gates of Heaven, Errol Morris’s 1978 documentary about pet cemeteries. Based on his rave I saw it at the Film Forum during college and instantly became a fan of the director. Throughout Morris’s career, I’ve always especially liked the films that deal with the studiously oddball, pictures like Gates of Heaven but also Vernon, Florida, Fast, Cheap and Out of Control, and even Mr. Death. Tabloid seems like one of those pictures, and I can’t wait.

The Town, Ben Affleck. The ads make it seem like a generic actioner. But I like the heist genre, and I really admired Gone Baby Gone. Oh, and Bob Elswit is behind the camera.

The Trip. Winterbottom in comic mode with Steve Coogan.

Vanishing on Seventh Street. Brad Anderson is another guy with an oddly interesting American indie career, and this is one more film in a genre — the empty post-apocalyptic world film — I like. I’m hoping this is the good kind of B-movie. 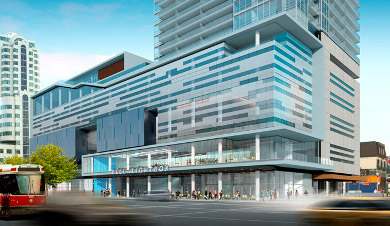 The Bell Lightbox. My biggest Toronto anticipation is not a movie but abuilding. For the last two years I’ve taken hard-hat tours of the new building on King Street that is now North America’s largest center for the film arts. I remember conversations with its Director, Noah Cowan, during the planning stages, and really connected to his vision of a building that would not just screen films but would draw connections between film, history, the arts and the broader culture. That vision is borne out by the program of the Bell Lightbox’s ambitious opening day, which features Atom Egoyan remixing 8 1/2, Michael Nyman performing his NYMan with a Movie Camera, Douglas Gordon’s 24 Hour Psycho, and that Ming Wong Fassbinder homage.