“AMERICAN SPLENDOR” AT STRANGER THAN FICTION

by Mary Anderson Casavant
in Filmmaking
on Oct 6, 2010 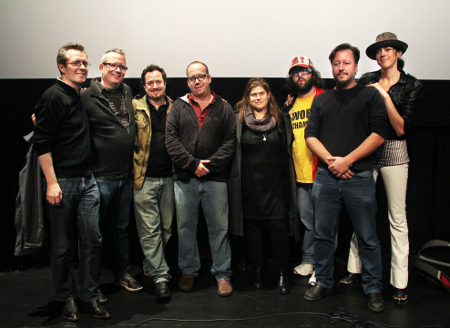 At last night’s Stranger Than Fiction, a weekly documentary series at the IFC, host Thom Powers paid tribute to underground comic icon Harvey Pekar, who died in July of this year, by screening American Splendor, the dramatization of Pekar’s celebrated autobiographical comic series about his life as a file clerk. A comics fanatic who became friends with the writer while working in the underground comic scene, Powers described discovering Pekar’s work as “a truly transformative experience.”

Powers almost did not attend a screening of the film at Sundance in 2003, terrified it would do something horrible to something “so precious.” To his and the festival’s jury great delight (it won the Grand Jury Prize that year), directors Shari Springer Berman and Robert Pulcini embraced Pekar’s philosphy that “ordinary life is pretty complex stuff,” weaving documentary footage of the morse Pekar into the more traditional scenes of Pekar as embodied by Paul Giamatti. The result is a surprisingly playful film with an affecting emotional texture — a reflection and an enhancement of Pekar’s work.

After the screening, directors Shari Springer Berman and Robert Pulcini were on hand to pay tribute to Pekar as well as actors Paul Giamatti and Judah Friedlander, producer Ted Hope, production designer Therese DePrez, and Dean Haspiel, the only one of Pekar’s several illustrators who bears the distinction of having introduced Hope to Pekar.

Like any good wake, the evening quickly devolved into a series of anecdotes. Springer-Berman and Pulcini recollected Pekar’s recommendation for a “fantastic” hotel in Cleveland, neglecting to mention that it was a hotel that catered to cancer patients. After all, Cole Porter had composed “Night and Day” on the upstairs piano, who cared if there were people getting chemo in the lobby?

Giamatti remembered that Pekar was always himself and remained unimpressed during the entire filming. He’d never seen any of Giamatti’s movies except for Planet of the Apes. When Giamatti explained that he had played the orangutan, Pekar exclaimed, “You were the Jewish one, man.” Later during filming, Pekar went on to assure Giamatti, “You’re good. You know you’re good…Don’t be so hard on yourself.” Friedlander, whose performance as the autistic Toby manages to be both broadly comic and shockingly humane, still seemed concerned about the fact that, “Harvey hated me.” Hope remembered how Pekar went into a depression after filming, only to be in awe of the response to the film at Sundance: “It was as if 15 or 20 years of life fell off his shoulders when he connected to people at that screening.”

At a time when the distinction between documentaries and narratives are collapsing, filmmakers would do themselves a favor to take a cue from both Pekar and his dramatizers — sometimes the best stories come from the smallest places. Like most of us, Pekar spent most of his time struggling with the daily battles of the life, just trying “to win a few skirmishes along the way.” In the end, his was a life lived, well or not is sort of beside the point.