“ON COAL RIVER” AT STRANGER THAN FICTION

by Mary Anderson Casavant
in Filmmaking
on Oct 28, 2010 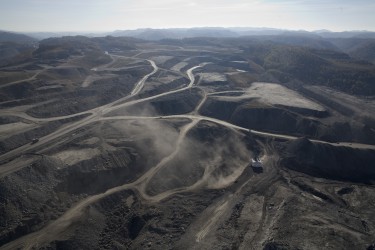 There’s an explosion. Children play on swings, unaware of a darkening cloud on the horizon. A man opens the back of his toilet only to discover it’s filled with black sludge. Just a few scenes from On Coal River, last night’s selection for Stranger Than Fiction, the weekly documentary series hosted by Thom Powers at the IFC Center.

Significantly more frightening than your average horror flick, On Coal River follows a group of West Virginia activists in their fight against Massey Energy and its practice of “mountaintop removal mining,” a type of strip mining where they literally blow off the top of a mountain to make sure that they get every bit of coal underneath.

Filmed over five years by directors Adams Wood and Francine Cavanaugh, On Coal River focuses most of its attention on a former miner spurred to action by the coal waste facility perched directly about his granddaughter’s elementary school. Determined to bring attention to the fact that the land he loves is being blown apart before his very eyes, he bands together with other homegrown activists and mounts a national campaign against Massey energy.

It’s a campaign that rips the entire community apart, mainly because Massey is one of the few employers in town. As one local says, “Mining is West Virginia. Mining keeps the lights on.” As On Coal River makes clear, if we don’t start doing something about our energy consumption, West Virginia’s barren moonscape will be America’s landscape. Their brackish water will be our brackish water.  Their nightmare will be our nightmare.

I spoke to one of the directors, Adams Wood, before the screening.

Wood: We moved to Asheville, North Carolina from the Bay area about eight years ago. We found out about mountain top removal almost as soon as we moved there… and were sort of shocked that we’d never heard about it before. We found out about one area in that region where that was happening; the people had lived there for a really long time  and were raising questions, trying to get awareness about this issue, so we got in our Subaru and went.

Filmmaker: Did you know from the start that you were going to make a feature documentary?

Wood: We thought it’d be a great feature from the get go, but we had no idea how long it would take. And although we had a vision of what we wanted the film to look and feel like, it took awhile to figure out whether that would be possible. We sort of took the first step. Suddenly it’s five years later, and we’re still doing it.

Filmmaker: You mentioned that you had specific ideas about the look and the feel of the film. What were those ideas?

Wood: I think we wanted to do two things. We wanted to communicate what it was like for people to live in that area. We didn’t want to over-romanticize West Virginia or the Appalachian region. We wanted to capture it as faithfully as we could, but at the same time, we had the feeling that these people are environmental and American heroes. We wanted to create something that felt a little bit more like a fable and took things out of the literal sphere. With the aerial shots and the music choices, we tried to create a feeling that was a little bit more epic and beyond the mundane.

Filmmaker: Your previous film, Boom: the Sound of Eviction is also about a social issue. Which comes first the film or the issue?

Wood: It’s both. We’re incredibly passionate about these issues, but we’re just as passionate about documentary storytelling. We feel like to really create a dialogue that has a chance to make a change, you need to tell an incredibly complicated and nuanced story. That’s where we spent our energy.

Filmmaker: Early in the film, you take a tour of a mining site and get to film an actual mountaintop being blown to bits. How did you get permission from Massey to access one of these sites?

Wood: It took a very long time of phone calling and luck, until we finally did…Most of these places are hard to physically access unless you do have permission. After a long time of peering at these places through wood shops and hiking up to these ridges and getting long shots or being up in a plane and getting shaky footage, it was pretty amazing to have permission to get as close as we did. It feels like being on Mars…We didn’t deceive anyone at all in terms of how we presented ourselves. We were just super friendly. Being super friendly helps.

Filmmaker: The film includes interviews with people who support Massey. Did you include those in the name of balance? Is balance something you worry about?

Wood: I don’t think any documentary filmmaker can be objective. At the same time, we thought it was really important to present opposing viewpoints and to present those people as sympathetically as possible…Not so much to present both sides of the argument but to fill in different parts of the social picture of who is affected by these issues and why they have the different views that they do.

Filmmaker: This story took a really long time to play out. How did you keep yourself going?

Wood: We filmed over five years. It was really grueling and required a fair amount of sacrifice, but nothing we sacrificed compared to what the people on the other side of the camera were going through. They’re really inspiring people, and they really inspired us to pursue this to completion. We hope that we would have something that would move people and expand conversation and touch people in a certain way…It was a big sacrifice, but it feels like it was worth it.