by Brandon Harris
in Director Interviews
on Nov 3, 2010 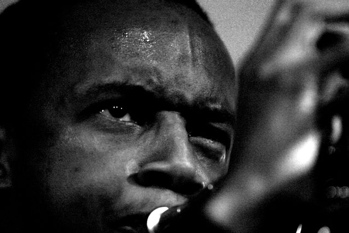 Damien Chazelle’s Guy and Madeline on a Park Bench is a throw back and perhaps a harbinger of things to come, a bebop tinged DIY mumblemusical that, despite its New Wavesque 16mm B&W aesthetic, is very much a movie of this time and moment. It concerns a relatively young, black and talented trumpet player named Guy and his would be, perhaps still his lover, a white grad student named Madeline (the oddly alluring Desiree Garcia). Played by real life Boston jazz scene leading light Jason Palmer, Guy engages in a series of pseudo-romances, bemoans the marginality of the relatively esoteric Jazz he plays and does alot of hanging out. Do he and Madeline break up in the films opening credit sequence or is this when they first meet? Narrative is sparse and conclusions always ambiguous in Mr. Chazelle charming, tightly framed film, one which is always cuing up and off the cuff musical number, even if they were all recorded by the Bratislava Symphany Orchestra. Guy and Madeline spend most of the movie in the company of others—Guy takes up with a pushy girl named Elena, who pronounces herself Guy’s girlfriend at some unarticulated point, while Madeline considers moving to New York, where she has an older, persistent suitor. Never less than bubbling with energy and just short enough to allow its paper-thin conceit not to feel overlong, it is, like its recurrent musical number “I Left My Heart in Cincinnati”, a delightfully whimsical experience.

After bowing at 2009’s Tribeca Film Festival, Guy and Madeline on a Park Bench played at AFI Fest and the Viennale before earning a nomination from the editors of this very magazine for the Best Film Not Playing at a Theater Near You at last year’s Gotham Awards. On the eve of its release (it drops in New York on Friday), Filmmaker caught up with its 25 year old director. 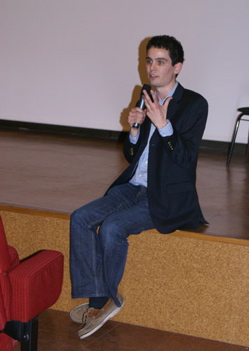 Guy and Madeline on a Park Bench director Damien Chazelle

Filmmaker: You made this film while still a student at Harvard?

Filmmaker: More than one person has made the comparison between the rough hewn 16mm style of your film and your fellow Harvard filmmaking alum Andrew Bujalski. Were you working in such a style mainly out of necessity or is there a certain ethic within that program that pushes toward those kinds of production values?

Chazelle: We’re kind of trained the same way, on those same camera with that same stock. Its  very documentary heavy program at Harvard, that’s how we learn. I was used to that kind of shooting with that kind of camera on my shoulder. When it came time to shoot this movie the aesthetic of it and the shooting style were something I was quite used to and comfortable with.

Filmmaker: Its one of the few true indies I recall seeing recently that I’d really like to see in a print.

Chazelle: I did want a finished print and I still want one a finished print! Just in time for the release now we’ve finally gotten the movie to a point on digital where I’m very happy with how it looks, but I shot the movie on film and I one day hope to see it projected in film.

Filmmaker: Beyond the group of films that Mr. Bujalski’s work is most associated with, I couldn’t help but think of John Cassavetes’ Shadows, another unassuming, jazz inflected, buoyant film about young, black musicians and there white interlopers. What were some of your other influences? Musicals, obviously.

Chazelle: At the time I was watching alot of early 30s musicals. Not even feature length ones, just early, two reel soundies that were experimenting with the form in some bold ways. They often starred Jazz musicians of the late 20s and early 30s, Duke Ellington and Bessie Smith or whatever. There’s a certain rough hewn feel to those movies, sound was still new the idea of a musical hadn’t been fully fleshed out and formulated in film and so these filmmakers didn’t really seem to know what they were doing, but in a good way. In a way that you could sense them making things up as they went along. It fit the style of music I was interested in and their was something about those movies that I really loved.

I had done some jazz playing of my own in high school. I was sort of vaguely familiar with the lot of young jazz musicians on the east coast and the weird thing of being young and playing this music that’s generally regarded as old timey so it seemed like a nice opportunity to tap into people who were sort of my age playing this music and make my own version of those old  soundies.

Filmmaker: For such a low budget work, there’s a certain expansiveness to the film, a kind of unassuming ambitiousness, that I think is really appealing and rare in independent work. What, between the working with non-actors, the elaborate music and dance numbers, was most challenging to achieve?

Chazelle: I purposely divided up the shoot so much, we did all the really difficult musical numbers or at least the majority of them at first, we front loaded all of that. That was terrifying at the time; they were the first things we shot at all, so I would say that was the most overwhelming things to do right off the bat, but we got them done relatively quickly. We spent another year doing the rest of the film, which proved challenging as well.

Filmmaker: Did you shoot piecemeal? Did you have to go back and raise more money after you started?

Chazelle: It was shot piecemeal. We never had enough money to last through the whole thing. We’d shoot on and off for a couple of weeks and then go and raise some money. That would take a few months and we’d edit while that was going on. The whole thing was stop and start out of necessity. We had very little traditional investment in the movie. Lots of very small donations and then a few big ones. We hit up family and friends, people from school, money saved from jobs. People were just tremendously generous, I’m hugely thankful.

Filmmaker: Did you always plan to make this into a feature? Its rare for students film in general and you mentioned how inspired you were by the two reeler soundies.

Chazelle: It was always a hope that it could become a feature film, but I wasn’t entirely sure what I was capable of doing practically when I started it. I pitched it as a short at school. When I started off, I just wanted to see how far I could go. Luckily, it ended up becoming what I had initially hoped for, which was to do a full fledged, feature length musical in the style of those films I alluded to.

Filmmaker: Did you know Jason Palmer from your previous experience dabbling in Jazz?

Chazelle: No, I just randomly went to this cool little jazz club in Boston that I had gone to a few times, Wally’s Jazz Cafe, and I happened to see him play. I had never heard of him. I hadn’t really been paying attention to the current jazz scene for a few years up until that point, being so enmeshed in my little bubble of Harvard filmmaking, so I was at this place, didn’t know who was playing, saw him and immediately after a few minutes of watching him play knew I wanted him in the movie and wanted to fashion the movie around his world alittle bit. There was something so interesting about not only him but the people he played with and the clubs he played in. A place like Wally’s is so old and derelict and the people who own it are these real jazz old timers and yet all the people who play there are kids straight out of Berklee or any of the music schools that are right near by who feed into that club. So I liked everything that was going on there and I liked him and after we made the movie I realized that everyone else seemed to like him to!

Filmmaker: Is this a form you intend to continue to work in? I mean the musical, not shoestring budgets.

Chazelle: [Laughs] I feel like I have at least one more musical in me. I’m not sure if I have more than one. While I was spending a few years preparing for and working on this movie, I’ve come up with alot of ideas about this genre that I’d like to play around with, but I’m not relegated to musicals and I don’t want to do musicals my whole life.