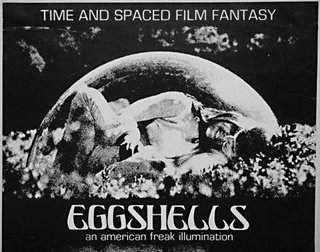 Celebrating the work of one of Austin’s filmmaking treasures, Toby Hooper, SXSW will be screening his little know first film, Eggshells. In this week’s Austin Chronicle, Louis Black, co-founder/editor of the paper and SXSW, writes about the film, which hasn’t been screened in close to four decades.

An excerpt from the story:

There were many extraordinary talents that worked on [Texas] Chainsaw [Massacre], including cinematographer Daniel Pearl; Hooper’s co-writer, Kim Henkel; art and production designer Robert Burns; and Wayne Bell doing sound. Even though, in so many ways, it is clearly a director’s movie in that all the elements are used to build tension and create horror. Hooper’s talent has always been clear, but just how much of the film was his vision and how much was his coordinating others’ contributions has never been readily apparent. Eggshells illuminates that Hooper’s vision and sense of cinema were in place long before Chainsaw.

Eggshells makes explicit what many have long assumed – that Hooper’s sense of cinema is the defining characteristic that makes Chainsaw great. Eggshells is a true 1968 film, psychedelic and political; it seems clear that Hooper had watched more than a film or two by Jean-Luc Godard. The film celebrates alternative lifestyles and politics and people and an odd, kinky semimysticism that is grounded more in humor than the supernatural. It captures what Austin looked like in the Sixties as well as the political sensibility shared by so many at the time.