by Brandon Harris
in Director Interviews
on Jan 12, 2011 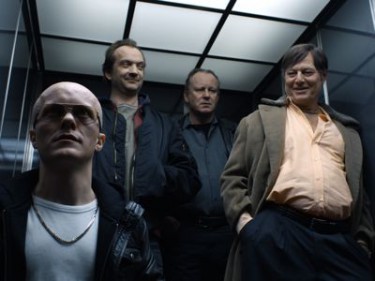 In Hans Peter Moland’s glumly humorous, sneakily moving Norwegian dramedy A Somewhat Gentle Man, a graying, ponytailed ex-con named Ulrik, played with droll aplomb by the always reliable Stellan Skarsgard, fumbles his way back into civilian life after 12 years in prison for manslaughter. He finds a job as a mechanic for a body shop owner (Bjorn Sundquist), who insists he be on time and stay away from oddly alluring office secretary Merete (Jannike Kruse). After finding a room in the basement of an aging, horny matron (a terrific Jorun Kjellsby), the sister of Ulrik’s former boss and petty crime running mate Jensen (Bjorn Floberg), Ulrik is given a pistol by Jensen in order to seek revenge against the man who testified against him more than a decade ago. The film’s tension hinges on whether he’ll return to a life of violence or be able to reestablish himself among the Norwegian working class, but dark humor seeps through the edges of this potentially grim story as Ulrik consistently finds himself caught in awkward social and sexual situations.

Once described by British film historian Peter Cowie as “The Ridey Scott of Norway” for his prolific career that oscillates between television commercials and feature films, the 55-year-old Moland is one of Norway’s most celebrated directors. Although he’s well respected internationally, with such lauded fest circuit successes as Aberdeen (2000), The Beautiful Country (2004) and Comrade Pedersen (2006) under his belt, he has yet to see any of his films find much success on this side of the Atlantic. That is likely to change with A Somewhat Gentle Man, perhaps his most broadly accessible film yet, which bowed to much acclaim at last year’s Berlinale. Strand Releasing opens the film in limited release this Friday. 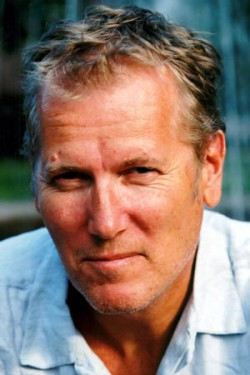 Filmmaker: How did you stumble upon this screenplay? Did your representation send it to you? Was it something you developed yourself?

Moland: It came to me in a very strange way. Usually I’m part of a project from the beginning, even if I’m not writing alone. This was a project that a producer friend of mine was trying to get off the ground. For various reasons it hadn’t come to together. He asked me to look at it. I really liked it. I liked the tone of it and I liked the absurd humor in it. It had a horrible third act in my opinion. I spoke to the writer and told him what I thought. He said “that make’s sense” and we tried something else. It really lost itself towards the end, it didn’t speak to you in the same way the rest of the film did, which is not terribly unusual if you read alot of scripts. For once I had the luxury of not being that close to the project to begin with so some fixes seemed very obvious to me and I was keen to try them.

When it came to casting, I suggested Stellan. I gave it to him and he read it the next day and said he liked it and wanted to do it. He had one limitation which was that his wife was giving birth in six months so we had to do it before she went into the hospital to have the child. So that put the pressure on to finance it quickly.

Filmmaker: Was it easier to finance once he came on board?

Moland: It was easier to finance with Stellan and to a certain extent with me as well. It made the project real and because I was so fresh into it I think we could really take it in some new directions. It was put together in record time. We closed the financing this time of year and started shooting in March sometime. It was a very quick process. He certainly helped, he’s a big star anywhere but he’s really one of the most highly regarded actors in Europe.

Filmmaker: The film has a very unique and memorable tone. It’s rare to find a working class crime saga that is this funny and strange.

Moland: One of the things that struck me was that it was very funny in a dry and witty sort of way about the predicaments that Ulrik is in. It deals with them in very real in human terms yet they are absurd. I had to treat it like a comedy, which I don’t think anyone had thought of. These characters are in the midst of very real dilemmas in their lives, however petty and unassuming their lives may be. I decided I wouldn’t be that close to them and I would take the piss out of them whenever I feel like it [laughs].

Filmmaker: It’s funny you mention your distance from the characters because, despite sensing that, one of my favorite things about the film are the gorgeous extreme close ups you use, such as the first shot of the film.

Moland: As a storyteller, I try to pretend I’m not there. It leads to a style that isn’t flashy or expressive. That’s deliberate, to sort of let it play out, that’s where the distance comes in. The presence of the storyteller in the film isn’t terribly emphatic. It doesn’t flinch at the violence or at a horrible moment, but instead it just sits back and says, “Oh, he’s in deep shit, I wonder what’s going to happen next?”

The closeness comes from Stellan in alot of ways. It is very much his film. He plays a man who comes out of prison with no idea about what to do with his life. Most of it is already over obviously because of his age. He has no pension plan. His career choices have been really poor. Like many people of that age in that position, he doesn’t have a lot of hope for the future in terms of work. So just staying alive, when you think about it, is a real predicament. He has no clue what to do after being inside for 12 years. So he’s a real lost soul. In human terms, that of course is tragic. It requires a certain kind of empathy. In terms of this story, I think it’s funny to see how he deals with it.

I think one of the things that initially made the project hard to finance is that he’s a very passive character. I argued that he isn’t passive, but that people have all these demands on him and he says, “Okay, uh huh, yeah”, so the trick was making it clear to the audience that although he seems passive, he perhaps doesn’t  share his thoughts with the rest of the world. By the time we reach the conclusion they’re aware that he in fact did have a plan the whole time.

Filmmaker: The women whom Ulrik has a rotating series of increasingly comedic sexual encounters with are perhaps the most entertaining aspect of the film.

Moland: I was just trying to define the characters as different human beings. His ex-wife obviously knows what kind of man he is and has been so to her the fact that he is a criminal is not a surprise. She’s someone who grew up with him as a hardcore criminal but it got a bit tiring when they got a child and it was difficult to maintain a criminal lifestyle.

The woman who he’s living with, played by Jorun Kjellsby, who’s terrific, a very courageous actress, she know’s that she’s no longer the cat’s meow [laughs], but she works with what she’s got, you know? She has the upper hand and she takes advantage of it. The fact that she’s capable of taking advantage of him show’s how down and out he really is.

Then the woman in the mechanic shop, I thought this is someone who is trying to hide her sexuality, trying to hide her femininity. She’s tried so many times to succeed with men and has been taught that nothing good comes out of it. So she’s just trying to blend in with the scenary and not be attractive. Jannike [Kruse] is a very attractive woman, far too attractive for the role actually, and I didn’t want her to be the babe catch, that would be stretching the believability of Ulrik’s character. She was a bit too young as well. She was so good in the screen test however that I thought, “Maybe I’ll make it work and just mess her up.” So when I talked to her about doing the role I told her that and she said she had another problem, she had just found out she was pregnant. What we did, we actually added padding on her which both concealed the pregnancy and made her look more dumpy. Of course, so did the costumes.

Filmmaker: For a film that seems to often be having some fun at it’s character’s expense, I found the end surprisingly moving.

Moland: Well it’s the film that I wanted to make, despite a low budget and short shooting schedule. I find the film funny and I find the situations funny. When people say they are quite moved by him that is something that comes as a bit of a surprise by me. I don’t mind it if people are touched by his life and predicaments. It’s a great compliment to Stellan for his ability to convey the humanity of that man. He’s not a nice guy. He’s a loser, a murderer.

Filmmaker: The title is ironic in that case.

Moland: The original title was Accounts. The film is about settling accounts, be it with your family or those who betrayed you. It didn’t strike anybody as a very sexy title. The word in the Norwegian title, The Norwegian word for “somewhat” has a very ironic connotation, it’s like saying somewhat pregnant, something you cannot be. You either are or you aren’t. So we thought it said something about the nature of the comedy in the film.