by Alicia Van Couvering
in Sundance Features
on Jan 20, 2011 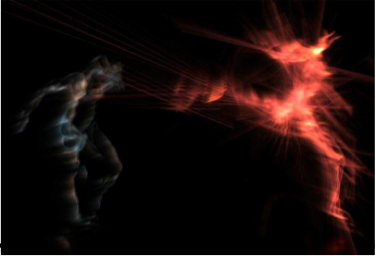 Sundance programmer Shari Frilot watches all kinds of films for the festival each year, but she spends much of the her time smoking out the best, strangest, most relevant work for the New Frontiers section. Call it new media or transmedia or video-internet-3D film art; the best work in the section is indescribable.

Until this year, New Frontiers was packed into a cavernous space inside the lower level of a shopping mall on Main Street. This year, they’re moving to the Miners Hospital, across from the Library. “Every year people would say, ‘Wait, where was New Frontiers?’ I missed that!’ Now we’re right across from the theatre; our panels are counterprogrammed with their schedule so if you can’t get in [to the Library], you can come over to us.”

A “majestic” Victorian house, the program will spill out onto a lawn, where the organizers have erected a screening pavilion. New space brings new challenges in Frilot’s quest to define the New Frontiers experience. “The basement fostered a spirit a community, so we want to keep that feeling in this new rubric.” To that end, there will be bonfires.

The organizers have deemed this year’ curatorial theme “The Liberated Pixel,” and have focused on art that explores how the pixel now survives and thrives in three-dimensional space. “In 2010, we began to see this great wave of film industry and film culture reorganizing itself over steaming video, Youtube, mobile network – what really caught my imagination was this idea of the moving image actually moving. Cinema is no longer something you approach by appointment only. It has entered the world of walking and talking, where the stories follow you from one place to another.”

The organizers have coined a term: The Electroskeleton. “[I’m using it to describe] all the media infrastructure that has encrusted the modern lifestyle,” she says. “Our phones, our laptops, the internet, it’s like the buildings we live in, our architecture. The pixel has a three dimensionality just like we do with our bodies; it has its own agency and its own physical presence in time and space, as opposed to something that’s just a screen. So we looked for work that engenders this idea – beyond just presentation in 3D.”

The dancer and choreographer (FELA!) Bill T. Jones and OpenEnded Group are here with After Ghostcatching, a 3D presentation of his very ancient art form, in which you can step inside a projected image of his movement, “as if his dance were a drawing – a drawing of movement, a drawing of sound,” says Frilot. “It’s sublime.” Moony is a Japanese artists’ group entry in which 3D butterfly holograms react when your hands enter a steam chamber. Glowing Pathfinder Bugs by the group Squidsoup creates bugs made of light who respond to how you play with a physical sand pit; climbing on you, hiding, crawling towards you, getting squished by you. 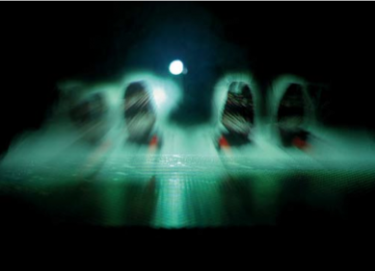 The butterflies of "Moony"

Other works are examinations of what happens when you incorporate the “electroskeleton” or to traditional cinema – when you take movies off the screen. James Franco has recreated a set of Three’s Company in his work Threes Company: Drama, reportedly brought several bags of costumes related to the main characters, and, in front of multiple screens surrounding the set with re-assembled Three’s Company footage (“The sexual tension is a little more urgent,” says Frilot), may or may not be planning to pull audience members into costume and put them into the space. From its inception, Braden King conceived his feature film HERE to include a live performance component, with a touring video / music show. Starring Ben Foster, the feature film portion of the project will play in Competition this year; its various other modes of presentation will be showcased at New Frontiers.

Of course, multi-platform media has been exploited to great effect for decades by marketers. We might soon see “the same tools you might use to market a movie to expand the story’s world,” says Frilot. “You might step into the story world when you pick up your cell phone, or a bottle of water.” These concepts are an integral part of gaming, a scene represented in part by Lance Weiler, the traveling troubadour of our interactive storytelling future, who is here with Pandemic 1.0, a mysterious live event of made from the actions of the festival’s attendees, plus a corresponding short film, which will play in the Next section. “I think bringing in aspects of gaming to cinema is fascinating. How gaming sends adrenaline into your body, and how [games] have totally overtaken the imagination of a certain generation.” The numbers of gamers versus the numbers of indie film viewers is barely comparable, so any speculator might conclude, observes Frilot, “that we’re headed in that direction.”

But Frilot is not inclined to throw in the straight-cinema towel. “The kind of experiences that grow our humanity are the kind that put you in someone else’s shoes and by walking in them, expand your perspective. The prolonged experience of [movies] make them potentially much more vital.”

“Our mission is to expand cinema culture, to expand storytelling using the cinematic image. It’s not a spinoff or about having art at Sundance,” says Frilot. “When we started this in 2007, it was all about divining – where might film go? This year it’s right here.”