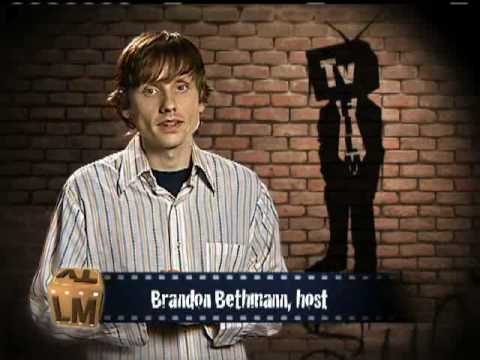 Brandon doing his thing as the host of TVFilm

Short films can often be gateways to feature films, experiments in storytelling, or stand alone works of art. After film school I still made one short film every year, but for me they were ways to try out ideas before committing to something feature sized. For some folks they are end goals that are beautifully done and well thought out. Sometimes however, we get short films that are too long, or ideas that exist between short format and feature length. Plus, with the introduction of Youtube and Vimeo we also seem to have an over abundance of “short films” that are clips of pretty flowers, landscapes, lakes, and sunsets set to music to show off someone’s new camera. They need to stop. (The one exception is Jamie Stuart’s film Idiot with a Tripod. It’s an example of how these kinds of films should be made…he knocks it out of the park.) While working for PBS I made friends with a fella by the name of Brandon Bethmann (pictured below). Brandon had already made two feature films when I met him, but after a short courtship, we set off together to make a short film. Brandon is now the producer of an independent short film showcase program called TV Film on PBS. I asked him to talk about his experiences as a producer, filmmaker, and his thoughts on independent filmmaking as it stands today. Hello, my name is Brandon Bethmann and I’m an upstate New York based indie-filmmaker. I usually add aspiring indie-filmmaker when I introduce myself at my wife’s work Christmas parties. (Because it’s not how I pay the mortgage I still say “aspiring.”) Anyway, my friend and fellow filmmaker, John Yost asked me to participate in this ongoing discussion on micro-budget independent filmmaking and I jumped at the chance to pontificate on the Filmmaker blog. OK, before we get started, some background: I grew up in the suburbs idolizing George Lucas. When I was in high school I went through a Doors phase and I hated stadium seating in movie theaters. I’ve made two feature films. One is a bad digital horror film and the other is a bad sci-fi film. Both films received straight-to-DVD releases by a couple of exploitation-themed DVD distributors! I’m always working on the next film even when it looks like I’m just lying on the couch watching Law and Order. Currently I’m a TV producer at the Albany, NY PBS affiliate station, WMHT. Between pledge drives, I produce a program that showcases upstate N.Y. independent short films and the filmmakers who have created them called TvFILM. We’ve done two seasons and we’re headed towards our third. So far, I’d say I’ve seen over a 100 short films — it’s the best part of the job to see so many people, right where I live, doing such amazing work!

I would like to speak to the filmmakers living and working outside NYC or LA. Why? Because these are the punk rockers of indie cinema! These are the ones who are trying to make their art in a place that from the beginning puts them on the outside looking in. Lately, I find myself doubting the validity of independent film. I don’t want to over-simplify the process of filmmaking but can we briefly go over the situation we find ourselves in, post the digital revolution? These days with the technology we have at our disposal I think it’s safe to say anyone technically can create an amazing independent film. Back in 1999 when I did my first feature film we had digital video (Sony VX100), Final Cut Pro 1.0 and cheesy “Film Look” filters (and we thought our time had arrived), but now we have HD, which, when done right is comparable to film! So we have the tools. Now on to the talent part. No matter where you choose to make films there needs to be a level of competency. You need to have people in front of the camera and behind the camera that know what they are doing. You know the camera is somewhat in focus and the talent (whoever that may be) is somewhat engaging. Of course, you could have all the talent in the world but you need the drive to get up at 4:30am and motivate your rag tag crew to get things done before you get kicked out of your location or you run out of battery power. Anyone who has made a film or even attempted the feat knows you put your blood, sweat, money, favors, promises, tears, time, passion and anything else you have into the project. It’s almost like a child, at least for a time. Once the film is done it’s time to submit to the almighty Sundance Film Festival and then be discovered just like that clerk from Jersey! OK, you probably won’t get into Sundance, but don’t worry, there are other festivals — Slamdance, South By Southwest and tons of specialty festivals across the country willing to take $60 or more to watch and eventually reject your film. What now? Well, you can control your own destiny and self-distribute your film. The days of four-walling a theater are done so all we have is the internet. You can make DVDs, sell them off the web and get your film out there. Of course, at this point the web is flooded with anything and everything film, so after you sell 20 to 30 copies to friends and relatives, then what? Of course, I’m making generalities but you can see where I’m going with this. For a lot of people who buy into the hype there is actually an independent film scene anywhere but NYC or L.A. needs only turn on the Independent Film Channel and watch a commercial-filled version of Clint Eastwood’s Letters From Iwo Jima (seriously, Thurs., Jan 13th at 8pm) to know that true independent film is dead and may never have really existed for anyone other than Peter Fonda, Spike Lee, Richard Linklater and Kevin Smith!

Now before you write me off as an O’Reilly-esque, “we’ll do it live,” hater, hear me out — I want to believe in independent film and if I was to ever make another film (fingers-crossed), it would be no budget. I really want to believe in micro-budget filmmaking! It’s hard to expend so many resources for an inevitable heartbreaking end. Now you could label me as a glass half-empty kinda guy but just answer this for me, what was the last film that you saw that was made and released outside NYC or LA? This may seem like a crazy question but look at music. There are musicians and bands all across this country, making music, making a living making music and sometimes even getting discovered. What if we took things a step further in this discussion and for us true independents considered stopping making films that try and emulate Hollywood? Of course, you need certain elements to make a song and the same can be said about a film but I feel most independent filmmakers are weighed down with this Hollywood aesthetic that 99.9% cannot create. I can’t do the Coen Brothers, BUT I can make a Brandon Bethmann film and maybe by staying true to what I want to say and using the resources available to me, wisely, the resulting film may be worth checking out? I’m not talking about replacing Hollywood or the established independent cinema, I’m talking about creating opportunities for filmmakers living and working around the world (preferably upstate N.Y. — kidding), telling any and every story they want and finding an audience. Maybe they won’t make millions but perhaps they can scratch out a living doing what they love. It would really put the focus on the artistic side of filmmaking. Every town has at least one local music club and art gallery, right? So, local musicians can go and play and painters and photographers can to the gallery and show their work. Why not something for filmmakers? I’m not talking about the once in the blue moon “indie-night” at the local movie house (anyway, independent movie theaters are going the way of the dinosaur but that’s a whole another blog post). I’m talking about a sustained, viable opportunity for filmmakers to show and promote their work to an audience. If we had this, I believe independent film in communities across the country would increase, actors and production folk might want to stay put instead of moving East or West and more true independent films would be the end result. Films that might be about people and ideas right in your neighborhood! Sure, they might not be the next Pulp Fiction but we have the multiplex for that!

The biggest obstacle to this Utopian dream is not Hollywood but the average everyday American: you. We have developed quite the taste for anything and everything corporate. And we don’t really want to deviate from our beloved Wal-Mart, Target, Dunkin Donuts, Applebee’s, American Idol or Transformers! This “box-store mentality” is promoting an environment of corporate, unoriginal, carbon copies everywhere! You can see it in clothes, cars, food, and even your kid’s cartoons! I know this is like a bad Jerry Maguire sequel. You’re picturing me at Kinko’s right now making copies of this very manifesto but I’m hoping you may relate to any part of this and even build on or refine some of these points — I don’t have the answers but a good start would be to dispense with the myth that independent film actually exists! This is just one man’s opinion but the first step would be to stop reading this on your iPhone and put down that cup of Starbucks! — Brandon Bethmann

I think that TVFilm is a great example of “put your money where your mouth is.” Brandon has been talking about locally sustainable independent film for as long as I’ve known him. Two years after we met he made this show happen and it is now in its third season. I say, take the idea to every local PBS affiliate across the country. Pull from your local talent and put together a nationally branded show that offers local fare. I was watching Hulu the other day and the ads seem to know where I lived and what products I like. If we can do that why can’t we use it to program locally made short films and features?! I agree with Brandon, why all the fuss of keeping just food and art local? Film is a great collaborative tool to bring communities together, to tell stories and talk about important issues. Let’s hope it’s in the future of independent filmmaking.