DANFUNG DENNIS: FROM AFGHANISTAN TO SUNDANCE

by Stewart Nusbaumer
in Uncategorized
on Nov 2, 2011

Originally posted in the Web Exclusives section on February 11, 2011. Hell and Back Again is nominated for Best Documentary. 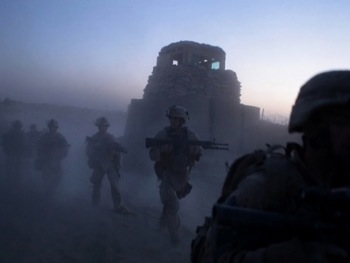 “At first my view of war was boyish and romantic,” Danfung Dennis told me in his Brooklyn loft five years after we initially met in Kabul, “but that view of war was based on video games and Hollywood.”

In the spring of 2006, Danfung flew from Beijing to Kabul and was driven to the Le Monde Guest House. I remember when he arrived. His clothes were neat, his hair stylish, he wore an easy smile and had soft brown eyes. Gentle and inquisitive, Danfung was a “newbie.” It was his first day in his first war.

Our unbalance in age and experience brought us together, his questions and my answers, his lack of war experience and my abundance of war experience. Freelance journalists and photojournalists tend to cover wars for a variety of reasons. They hope war will lead them to career advancement, they know it will give them some heavy adrenaline rushes, and the have a strong desire that war can somehow fill a personal void in their lives. I never understood what pushed Danfung at the age of only 24 to come to Afghanistan. On the other hand, I never asked him. War journalists never ask that question.

After a few weeks, I left the comforts of the Le Monde Guest House and returned to the battlefield, traveling back and forth between Iraq and Afghanistan. Although I no longer remember the order of where I was, I certainly remember where I was. Dublah with an-attack-a-day, the bombed-out compound in the middle of Heet, “The Street without Joy,” in the mountains on the Afghanistan-Pakistan border and in the desolate desert next to Iran….

And Danfung went his way. When Baquba turned into ground zero for violence, Danfung was there. When foreign fighters turned Mosel into an urban bloodbath, Danfung was there. He worked his way into the infamous Korengal Valley, site of Restrepo, last year’s Sundance documentary film winner. He was jumping all over Afghanistan and Iraq. Then came his final embed, his final location: “The Fishhook,” the Taliban stronghold in the Helmand River Valley.

During those several years, our paths would occasionally cross. And Danfung was always the same: neatly dressed, meticulously organized, gentle voice and caring questions, big smile and warm eyes. But no one travels from war newbie to combat veteran and remains the same. Nobody. The small fraternity of freelance war journalists is not a shrine to the mentally comfortable.

The other night in his Brooklyn loft, which is above a furniture factory in the desolate East Williamsburg warehouse district, although there are a few scattered grungy-hip establishments, Danfung discussed his battle between the two visions of war.

“The process of separating the false Hollywood-videogame representations of war from the honest and truthful images presented by the great photographers occurred gradually,” he said. The war photographers that inspired Danfung — Robert Capa, Don McCullin, James Nachtwey; Eddie Adams’ photo of a Viet Cong being executed, Nick Ut’s image capturing the screaming horror of a young girl whose skin was napalm enflamed — gave him guidance and encouragement. Yet, this vision coexisted with the tale of war as glorious and heroic, “with the Hollywood-videogame false view of war.”

For Danfung, probably for most good photographers — certainly all good war photographers — visual imagery is more than a powerful tool to move people’s emotions. The act of photography is a moral act. As James Nachtwey wrote:

“I have been a witness, and these pictures are
my testimony. The events I have recorded should
not be forgotten and must not be repeated.”

That, it seems to me, is why Danfung left his economic work in China and came to Afghanistan to be a war photographer. And why, for the better part of the next four years, Danfung crawled on his stomach and hid in ditches and behind trees risking his life and limbs. It wasn’t for self-promotion or raw excitement or personal need. It was to witness and give photographic testimony. 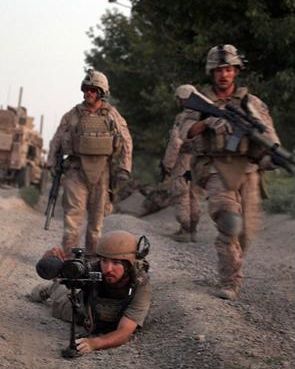 In the summer of 2009, more than three years after Danfung arrived in Afghanistan, the US Marines were preparing their largest assault since the Vietnam War: 4,000 Marines would be airlifted down the Helmand River Valley to capture the Taliban controlled region. The press was declaring this would be the crucial battle of the war. Danfung, marooned in a remote outpost far from the coming battle, worked his way into the assaulting Marine force — actually, into the forward tip of the assaulting Marine force.
In his Brooklyn loft sipping green tea, Danfung explained that when struggling to capture the truthful imagery of war, and banish the false view that peddles war as heroic —– that continues to have a tight grip on the imagination of the American people — he was also struggling with what medium should present these truthful images.

“I had come to the sad realization that the medium of the still images of Capa, McCullin and Nachtwey was no longer effective in counter-balancing the false representation. My love and respect for photography remained, but the medium was not working in Afghanistan. I needed new tools and a new language. After 10 years, the war had become an abstraction to Americans. I needed something to shake them from their indifference.”
When Danfung flew south into the Helmand River Valley with Echo Company, 2nd Battalion, 8th Marine Regiment, he was equipped with a Cannon 5D Mark II, a still camera with excellent video capability, a Sennheiser shotgun mic, and a customized Glidecam mounting system. And Danfung the filmmaker was born.

The Marine unit was dropped by helicopter at the southern-most location of the massive assault, and soon the 2nd platoon was surrounded by the Taliban. This was the infamous “Fishhook,” considered one of the strongest strongholds of the Taliban. The Marines took causalities, one was Sergeant Nathan Harris — shot in the hip with the bullet traveling down and out his thigh — a platoon sergeant that Danfung would later describe as “the perfect leader.”

This is where Danfung Dennis’ Hell and Back Again documentary begins. Marines in heavy combat, Marines attempting to persuade local Afghans they are the good side — while the locals only want to be left alone by both sides — Marines wounded, even dying. It is the combat war that has existed for a decade, is America’s longest war, and has numbed Americans.

Danfung left the fighting at the “Fishhook” and flew with the wounded Sergeant Nathan Harris to his home in North Carolina. Whereas the Marine on the battlefield was the “perfect leader,” in control, barking orders to his platoon, caring for “his men,” the seriously wounded Marine at home is dependent on pain killers and his wife, Ashley. She assists him in getting dressed, drives him to the store and to the doctor, assists him in nearly everything.

Director Danfung Dennis and Editor Fiona Otway made this jarring contrast between the self-confident Marine leading his men in war and the dependent Marine struggling in mental and physical pain at home the central thread of Hell and Back Again. An intercutting of scenes weaves us through both narratives, slamming us back and forth between the dangerous combat and the savage peace, the juxtaposition of two ugly worlds uses sound layered and slowed to overlap the narratives. It’s stark realism merging with dreamy realism. And the viewer ricochets between two horrors until the repetitive intercutting brings the two together into one.

It’s a theme that I have written about and discussed late into the night. For those who have been in intense combat, the war always follows them home. Whether they have a shattered body or a wounded mind, or, as with Sergeant Nathan Harris, both, when they leave the battlefield they are only beginning another war.

At the recent Sundance Film Festival awards ceremony, Hell and Back Again won the jury price for World Cinema Documentary. I rushed into the filmmakers section and embraced Danfung, and in an emotionally chocked voice, said: “It’s been a long and difficult road, Dan.”

Yes, a five year long and difficult road. Danfung traveled from newbie at the Le Monde guest house in Kabul to a veteran war photographer on the battlefields of Iraq and Afghanistan. He questioned his own representation of war, fighting for the truthful one, searched for a new medium to replace his beloved photography, became a filmmaker under the most brutal conditions, and struggled to refine a cinematic form to shake America out of its indifference. But war does not end on the battlefield.

Danfung jumped from a Marine platoon in vicious battle on the battlefield to the Harris family home in the midst of a very different yet equally vicious battle. And like every combat veteran, whether soldier or journalist, when Danfung returned home he struggled with crowds and sharp noises and nightmares — wars don’t stop when the shooting stops.

Yet, always, Danfung was the witness, in Afghanistan and in America, in the battle and in the other battle, and Hell and Back Again is his stupendous testimony.

Stewart Nusbaumer served in the US Marine Corps in Vietnam and is a graduate of Vassar College. A journalist for several decades, Stewart has traveled in 108 countries, reported from more than 15 wars, writes about political campaigns and about film and film festivals.