Janet Pierson on the Films — and Crowds — of SXSW

by Alicia Van Couvering
in SXSW Features
on Mar 9, 2011 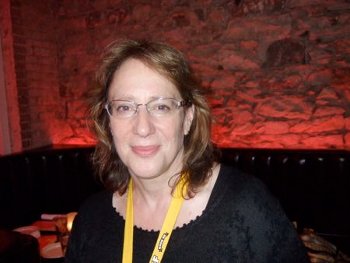 Six weeks before the festival, every hotel room in downtown Austin was booked solid. Badges were already selling out a month prior, and, in the last few weeks, LAX-AUS flights have become almost impossible to come by. Last year the festival was, by all accounts, over-crowded — press and industry felt needlessly constrained by the impossibility of special access to screenings, and complaints of line cutting were all over Twitter. Pierson and her staff took all of these criticisms hard. In the wake of the grumblings, there are new and bigger theatres (the renovated State Theatre, next to the Paramount; the Vimeo theatre inside the convention center), new policies in place to cut down on cutting (sequential numbers will be distributed one hour before each screening) and methods to cheer up the industry (same-day Express tickets will be released each morning to badge holders.) But as the anecdotal evidence mounts, some anticipate the most crowded, least buyer-friendly atmosphere ever.
Has the new pressure from industry affected Pierson?

“We do feel that there’s more attention. We’ll see how it plays out, it’s tough — you want great things to happen for the films, because press coverage benefits everybody; agents and distributors and buyers should discover the films and give them futures and income. But we’re not a market, so we need to balance that.”

SXSW’s pride in not being a market — the desire to guarantee “democratic” screening environments for the films; to cater to the audience, not the industry — is complex. With premieres of films by Takashi Miike and Jodie Foster (The Beaver, which Pierson is proud to be showing, as it would have been swamped in tabloid frenzy anywhere else), the program needs to retain a balance between the audience favorites, press schedule relevance and emerging filmmaker discoveries.

“For me, being a destination festival is important, being a place that people bother to take a flight and book the hotel, that’s a goal; you want to experience this event in real time.” But the lack of press and industry perks is part of a larger mission to maintain a distinctive identity in the festival landscape.

“Matt [Dentler] really carved out this territory that is emerging, DIY, scrappier… people say it’s edgier, less politically correct, and I think that’s the case still. We’ll often watch a film and say, ‘That doesn’t feel like us.’ If something’s too conventional, we may pass on it and take a chance on something unknown,” says Pierson. “At least that’s what I think we’re doing. It will be for the writers to decide if we did it [this year].”

Submissions had a 23% increase over last year — 4,900 features were sent in for review. “I haven’t been outside in months,” she admits. This week, she is finalizing the program book. “Matt Dentler wrote that he had an anxiety dream the other day that he was so glad he woke up not to be actually dealing with the book.”

The festival has changed since Dentler’s tenure, partly, says Pierson, because the SXSW’s programming method is so personal. The mumblecore collective Dentler nurtured and assembled — filmmakers like Joe Swanberg, Todd Rohal, Barry Jenkins, Andrew Bujalski and Mike Tully — now play everywhere (Sundance, Berlin, etc.), not just SXSW. (Swanberg, Tully and Rohal are all screening their latest in Austin this year, the latter two after screening at Sundance and the former with his Berlin-premiering Silver Bullets). Meanwhile, Jenkins and Bujalski have projects in development at studios. 2009, Pierson’s first year, produced only a few films that made a blip on Hollywood’s radar, but last year there was a goldrush. After the success of Marwencol, Garreth Edwards’ Monsters and Lena Dunham’s Tiny Furniture (which, full disclosure, I produced), SXSW is on the industry’s map in what feels like a more feverish way. Dunham’s new series on HBO, co-executive produced by Judd Apatow, and Edwards’ new job as Godzilla director have doused the water with enough young blood for acquisitions VP’s and agents covering the indie film beat to be out in full force.

“As the festival gets bigger, the scope of the films doesn’t get bigger — so there’s a very real question of, ‘Will expectations be met’?” Pierson says. “Last year was so exciting because the films really connected to the audience. Is there a film [this year] as exquisite as Marwencol? Not exactly. Is there a film as rousing as Thunder Soul? Not in the same way. Do we have a 45637? I hope so. But we just picked what we thought were the films that really spoke to us,” says Pierson. “There are so many more good films than we can program, so at a certain point you start making choices based on what’s ‘more us.’”

So what are the themes that emerged this post-Obama era? Demurely, Pierson says, “Again, that’s for the writers to decide.” Has there been a sea change in the aesthetic execution of the low-budget films she sees? “Not this year,” she says. “I don’t think the aesthetic of films has changed that much — although we have a film that was made on an iPhone 4. We did get a ton of films on fighting, and fighting leagues — 13 films on that subject. A few years ago there were seven films on food that were almost identical because it was the year of Food Inc. Two years ago there were a lot of oil and gas, this year there were a lot of bees.” And in the narrative world? Pierson thinks. “Well…a lot of choking in sex scenes, choking as a sexual enhancement. I saw that a lot.”