KYLE HENRY ON ATTENDING CANNES… AND SKIPPING HIS FILM 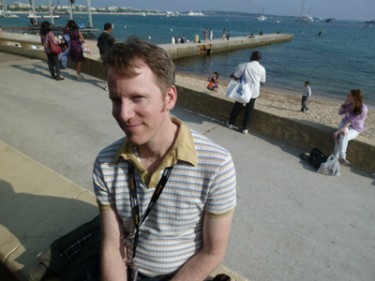 I ran into filmmaker — and Filmmaker “25 New Face” — Kyle Henry at the American Pavilion in Cannes, and I was startled to learn that he was attending the festival… but skipping his screening. He offered to explain in a blog post.

Your film gets into the Directors’ Fortnight of the Cannes Film Festival, and you can’t stay for your screening… are you crazy?

Well, that was my case this year. My film Fourplay: Tampa, a short that is part of the anthology-of-shorts feature Fourplay, got the magical golden ticket to one of the festival sections at Cannes this year, the Quinzaine des Réalisateurs/Directors’ Fortnight. (For a wonderful short history of the Directors’ Fortnight, check out this article by Scott Foundas.) I’m 40 years old and also a full-time assistant professor at Northwestern University, my first tenure track job, where I’m teaching a full course load with 35 students that need my care and attention. Also, I’m still riding a decent amount of debt from my first feature, Room, which played at both Sundance and Directors’ Fortnight in 2005, so optimally I wanted to get the most out of my Cannes experience without recklessly breaking the bank again.

Which led to the unfortunate conclusion that I couldn’t stay the full 10 days of the festival. Plane tickets and rooms were A LOT cheaper for the first weekend than for when Tampa screened with the rest of the Fortnight shorts on Friday, May 20. My producer Jason Wehling and I determined that it was far more important to be there for the opening of the fest, to meet festival programmers and potential distributors for the eventual feature, than to attend our own screening when many of these programmers and distributors have packed up shop and left the Croisette. When I told fellow filmmakers that I had to cut my Cannes trip short they told me either that I was nuts or that I must be “really dedicated” to my other job as a teacher. And I think it’s a little bit of both.

First, let me just say again how grateful I am that our little weirdo film found such a great reception from festival programmers this year. Just being accepted brings a profound sense of validation to not only myself but to the entire cast and crew who put their blood, sweat and other bodily fluids into making the film. If it were to be rated, Tampa would definitely get an NC-17. All the Fourplay shorts push boundaries by telling frank, honest stories about sexual intimacy. The stories vary from tear-jerking melodrama to slapstick gross-out comedy, but each is informed by lived experience. And the “shock and awe” each short provides is palpable at the screenings that each has received to date.

For me, the most important part of a festival experience is putting your work before an audience. Seeing (and hearing) how they respond is icing on the cake.

At our Austin test screening of Tampa women and men where literally screaming during the, ahem, climax when fluids go a-flying, so I really want to know how a perhaps more jaded, international cineaste audience would respond. Fortnight artistic director Frédéric Boyer and other programmers at the festival were sure the audience would have a strong reaction, so much so that they informed me they would post a notice outside the screening warning audiences that film might “hurt their feelings.”

So after five days at Cannes we flew back in the USA and waited for reports from our spies. At the fest we had spotted a few old friends and made many new ones, each of whom we tried to cajole into being our eyes and at the screening. The word that came back was that the screening brought the house down, with one spy reporting that he hadn’t laughed so hard in ages.

Now I’m back in the USA , really happy to be in Chicago grading student projects and helping students craft fully realized films. As much as I love being a filmmaker and documentary film editor, I want most to be useful to my community, whomever they might be at any given moment. And as much as I’d love to have been there myself for my “moment of glory,” it’s good to be back working with my students so that perhaps, one day, they can screen one of their own works at the Directors’ Fortnight or Sundance or SXSW or one of the many festivals where work is enjoyed by open and enthusiastic audiences. — Kyle Henry

Kyle Henry is a filmmaker/editor from Texas now based in Chicago and teaching at Northwestern University. He has several projects in development for production after Fourplay is complete in early 2012.