DOCS ON THE CAPE: THE 20TH WOODS HOLE FILM FESTIVAL 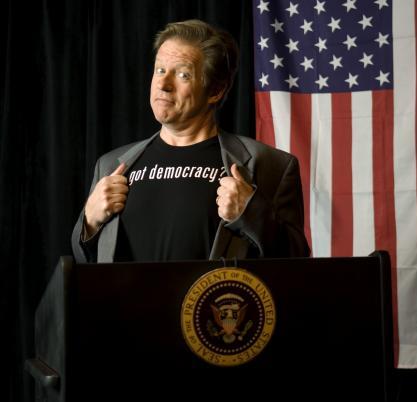 by Stewart Nusbaumer
in Festivals & Events
on Aug 9, 2011 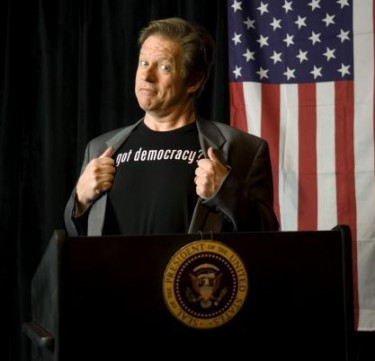 “Oh no, the festival hasn’t changed at all in 20 years,” Judy Laster, founder and director of the Woods Hole Film Festival, says with a devilish twinkle in her eyes.

Twenty years ago the first Woods Hole Film Festival was one-hour long with five short films. Today it’s eight-days long and over 100 films with panel discussions and workshops and some of the best social events on the festival circuit. “We could be much larger,” Judy adds, “if we wanted to be. But we don’t. You don’t have to be Sundance to have impact.”

Small yet prestigious, community-anchored with national outreach, in twenty years the Woods Hole Film Festival has grown significantly in size yet remained steadfast in mission. No red carpets here. The festival’s backbone remains an intensely loyal local audience. When screening only five shorts over an hour at one venue, the inaugural Woods Hole Festival had to turn people away. Screening more than 100 films over eight days at three venues, I barely got a ticket for a film – and this on a Tuesday evening!

Jimmy Tingle’s American Dream (pictured above) is a delicious, humorous romp through one man’s probing mind, interspaced with the commentary of notables from Robert Altman to Howard Zinn to Jimmy’s mother Francis (certainly notable to Jimmy). This is not an American Dream that jumps reality. There is criticism, and a look at the underbelly of America, yet Jimmy’s smile of optimism always returns.

A comedian from Boston with national recognition, Tingle’s boxer-like body twists and jabs to the rhythms and meanings of his spoken words. He leaps forward for an exclamation mark! Steps back to give us space to contemplate. Lunges toward the camera to drive home a point! Sweeps his arm wide to build drama. Tingle is working class with a sharp mind, American patriotic with an open mind, funny guy with a wallop of a verbal punch.

With the ever expanding number of film festivals, an increasing number are floundering in their attempt to create an identity that separates them from the bulging pack. This has never been a problem for the Woods Hole Festival.

Set in the picturesque village of Woods Hole next to beautiful Buzzard Bay on gentile Cape Cod, the size, character and tone of the festival are solidly rooted in its location. The festival’s personality flows from the restrained Yankee tenor, the dedication to principles from the same source. Woods Hole Festival is both a step back in time and right up with the times. Twenty years ago, one of its missions was to showcase and promote films about Cape Cod. Today that mission remains strong. 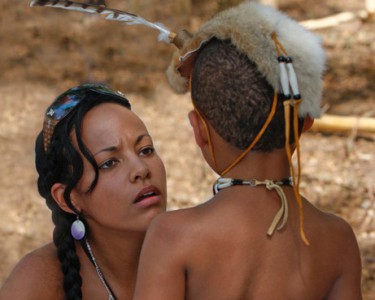 A language is more than words, says We Still Live Here: As Nutayunean. Language embodies a culture and is a reservoir for history and identity. So when a language dies, the culture dies, a people stumble and eventually disappear. The tools of destruction are war, disease, cultural assimilation — with religion often at the tip of the assault – and thief of communal lands. All of these weapons killed the Wampanoag language. A Native American tribe in Southeast Massachusetts, including Cape Cod, in the winter of 1620 the Wampanoags saved the newly arrived Pilgrims from starving to death. Now the Wampanoags are attempting to save their language.

We Still Live Here: As Nutayunean tells the extraordinary story of Jessie Little Doe Baird and fellow tribal members as they attempt to bring back to life their dead language. The last speaker of the Wampanoag language died over a century ago. No language in America has been revived without native speakers. The Wampanoags are attempting to be the first.
Veteran filmmaker Anne Makepeace with animator Ruth Lingford present a finely woven story of resurrection, a story about the human will conquering the dark forces of the past that eradicated the Wampanoag’s language and today threatens its collective identity. It’s a stunning tale that gives hope to the human spirit in a time when diversity is losing the battle to survive.

“Showcasing good films is only the beginning,” Judy Laster says. “The audience that comes here year after year wants an experience where they can talk to the filmmakers, can have real conversations with those who make the films. They want an intimate experience. Our audience is an equal partner.”

There are documentaries that tell you what you don’t know and those that tell you much more about what you know a little about. A subject dormant in the outer recess of my brain, patiently waiting to be brought alive for consideration, was explored by The City Dark.

Filmmaker Ian Cheney, who grew up in the darkness of rural Maine and now lives in light flooded New York City, asks in The City Dark, what do we lose when we lose the dark? What happens when we can’t see the stars above? Are we cut off from our universe? Do we become more self-centered … egotistical … less human?

We know light inhabits melatonin production; melatonin may help our bodies combat certain cancers. Erasing the dark, then, can affect not only our psychology, who we are, but also our physical health. But hasn’t history, Cheney asks, been a struggle against darkness? Isn’t light a symbol of human progress? Yes, but too much light, light that erases the dark too much, is light pollution. A foul byproduct of civilization that in defeating the past has created a new problem. Sounds familiar, right?

Beautifully photographed and paced ideally to give our thoughts room to breathe, The City Dark sheds a different kind of light on a social problem that may be soon take center stage. In fact, some communities — the film notes Bar Harbor, Maine — have already acted to restrict light pollution.

Then there are those docs that, because of one’s disinterest or dislike of subject, tell you what you don’t care to know. No big deal, except when you discover what you had dismissed is actually fascinating.

A Good Man focuses on acclaimed choreographer and director Bill T. Jones as he struggles to create an original dance-theater composition to honor Abraham Lincoln’s bicentennial. There is the battle within over his meaning of Abraham Lincoln, a good man, yet not always. There is the battle between himself and the dance company. Yet, in the very beginning of the film, what captured me was the beauty and gracefulness of the dancing, the powerful aesthetic movements of the dancers. A subject I know nothing about, have never had any interest to know anything about, yet I now found fascinating.

But this is not a documentary about dancing, nor Abraham Lincoln, or even about Bill Jones. It’s about an artist’s struggle to make his art. Some viewers will find the constant undercurrent of frustration, the smoldering anger, and the sharp outbursts gripping. Others will find it too similar to a television “reality” show, where substance is sacrificed for emotional fireworks. Although the bickering and conflicts were wearing, A Good Man did open me to a new world, and it’s hard to be too critical of a film that opens your closed doors.

Woods Hole Film Festival remains, after two decades, what it has always been: an intimate and smart event that screens good films across a wide spectrum – from an exploration of the American Dream to the rebirth of a dead language to examining the evaporating of the night sky to chronicling the making of an theater-dance performance. As commercialization and celebritzation play a larger role on the festival circuit, Woods Hole remains rooted. Good films with varied subjects, and an unwavering dedication to independent film.