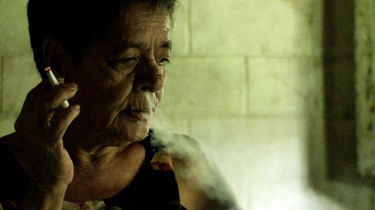 Imagine a village of peasants in a mountainous jungle region of El Salvador that would be completely devastated by bombs during the Civil War (1980-92), and most of its inhabitants, including teenaged boys and girls, brutally murdered by the National Guard. Or better yet, let filmmaker Tatiana Huezo imagine it for us and update it in her unforgettable documentary, The Tiniest Place, one of the finest docs I’ve seen over the past year.

The puebla is Cinquera, which was suspected by the government of being a hotbed of leftist guerrillas. Several families, many of which lost most of their children, returned after the war and rebuilt it. Huezo, who is half Salvadorean, half Mexican (this is a Mexican production, though Cinquera is the hometown of her grandmother), takes us beyond these tangibles—far beyond, approaching the otherworldly–by intercutting gorgeous, haunting scenes of surrounding nature with residents going about their business, or facing the camera for almost uncomfortable periods of time without saying a word. Cinematographer Ernesto Pardo works wonders with landscapes of terrain and landscapes of human faces, which reveal that these people have survived hell.

In an inspired use of voiceover, however, their words are there. For greater openness and intimacy, Huezo recorded their testimony only on audio, and plays the edited interviews over shots of the gigantic trees, the large lake, the hilly pastures, the clouds and the moon in the sky. In what in another context might be construed as cliché, she succeeds in her goal of evoking the ghosts of the dead, phantoms hovering in the nearby forest where many of the victims were killed. The separation of image and voice suggests an ethereal realm into which most young residents of Cinquera crossed over way too young more than two decades ago.

Most of the stories are of loss and the role memory plays in dealing with it. Youths just disappeared; the girls were often raped and mutilated. One couple lost seven of their nine children. As you might assume, most of the residents are traumatized. A cattleherder is an insomniac whose hands shake before the camera. Another man, very thin, leads us into a dank, narrow cave where several families hid in darkness for three years, with bats flying overhead, then explains that he was pretty much the only survivor once the soldiers discovered them.

What precipitated the tragedy of Cinquera was the arrival of progressive priests before the war who taught the townspeople liberation theology. They should stand up for themselves against the wealthy, whose rights the establishment church promoted at their expense. Up until then, like most of the poor in El Salvador, they had accepted the idea that they should be thankful that the resources of the rich provided them with jobs. The priests opened their eyes and taught them a new term: subversive. For buying into it, and in many cases espousing it, the townspeople ended up being heavily punished.

Given the unbearable level of psychological and emotional pain they have suffered, today’s residents appear in some ways almost normal. They work, they laugh, they gossip. Young kids are growing up, attending school and playing sports. There are, of course, very few men and women there in the 35-45 age range. It is as if a generation has been bypassed.

Without sentimentality, Huezo shows that many of the Cinquerans who lived through the war have opted for affirmation. An old woman channels her sadness into hatching chicks, nearly hypnotizing a large hen to sit on the eggs. One of her peers speaks of her 15-year-old daughter as if she were still around; she sees evidence of life in the light of the ubiquitous fireflies. The cattleherder smiles broadly after observing one of his cows giving birth and licking its calf into life.

The doc ends with a heavy downpour that becomes, paradoxically, a joyous communal experience. On the soundtrack, maniacal strings erupt to accompany shots of grinning old and young people running for cover.

The film is having a one-week run in New York and Los Angeles as part of DocuWeeks, which was created 15 years ago by the International Documentary Association as a showcase to allow certain docs to qualify for Oscar consideration. This year 17 features and 7 shorts are unspooling at the IFC Center in New York (August 12-19) and the Laemmle Sunset 5 in Los Angeles (August 19-September 8).

The Tiniest Place screens twice a day in New York from August 19-25, and in Los Angeles September 2-8. Check www.documentary.org/docuweeks2011 for showtimes.