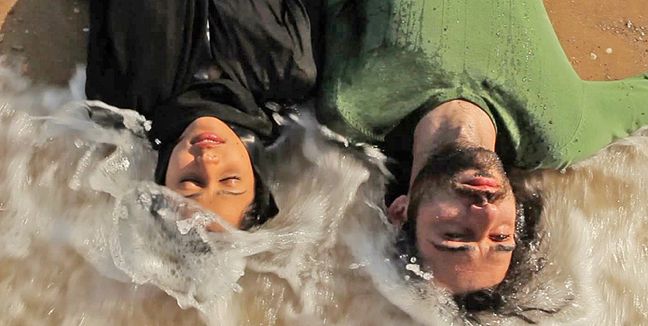 When we chose Susan Youssef for our “25 New Faces” list in 2009, the Brooklyn born filmmaker of Lebanese and Syrian parents was in post-production on her feature Habibi, which she had been working on since 2002. “I’ve been working on the film for eight years, continuously,” she said. “I’ve never fought for something so hard before — I’ve defined my whole existence around this film.” Fortunately for Youssef, her work has paid off. Habibi premiered last month to strong response at the Venice Film Festival and now plays Toronto before heading to Dubai.

Based on an ancient Sufi parable, Habibi tells the tragic story of two young lovers in the Gaza Strip, Qays and Layla, who struggle to be together and express themselves through art in a restrictive culture. We asked Youssef about her long journey, how she finished her film, and her next project.

Filmmaker: When we last spoke to you, it was 2010 in our “25 New Faces” profile, and you had been working on the film for eight years. What’s happened in this last year, and what was involved in this final push to finish the film?

Youssef: Well, first off, I have to say the ’25 New Faces’ profile was an incredible push for HABIBI, that brought the film to the attention of a lot of people that have now become our allies, and have introduced us to other who befriended the film.

The ’25 New Faces’ profile, in part, led me to a brea through on my working process on this film. For a long time, I worked devotedly on the project, believing that I only had to make an amazing product to succeed. I was improving the edit, writing the best grant applications I could, reaching out to other artists, such as the composer, who could really enhance the film with me. But within this year, I watched my colleagues who were having their breakthroughs with their film–getting the financing, premiering, getting the sales agent–and I realized that while of course the quality of their work was good, their friends and backers were really helping them meet their goals. It was not just the high quality of the work alone. I needed to really step out of the creative cave I was working in, and go out into the industry and do more field work.

I think because of my passion for the film, I was reaching out to people a lot already, but not to the extent I needed to.

This was not a quick realization and I was already making the change into a more social filmmaker, without being fully aware I was doing it. From the ’25 New Faces’ write-up which introduced me others; to the alliances I would make through suggestions of the leaders of the IFP Lab; to the Kickstarter campaign that I launched for the film that also created a lot of personal relationships for the film. So this year was a mix of very intense solo work on the edit and just as much work getting out there and speaking for the film not just for the financing but also for the distribution. In the end, the support that came through for the film, donors, sales agents, festival programmers, came via-via other people.

Filmmaker: How did the IFP Narrative Lab impact your movie?

Youssef: The IFP Lab impacted my film in three ways:

1) When I first brought the cut to the lab, it was an assembly, and I was terrified by the content. I really thought I had done a lousy job, merely because what I didn’t have on the editing table was the film I had dreamt of shooting. I had something else completely and it was at first devastating for me. But I remember on the first day, when I walked into the lab, and all the lab leaders told me how much they liked the film–I was gobsmacked. This helped. I borrowed on the leaders’ belief.

2) Each of the Lab leaders provided monumental individual support behind the film. Scott Macaulay again and again answered specific producing questions for me, that I, as a first-time producer, was having a very difficult time answering for myself. In addition, Scott invited me to be innovative at times about my approach, providing solutions I may not have otherwise realized for myself. Also, via Scott writing about HABIBI, which he viewed as a mentor of the IFP Lab, in my ’25 New Faces’ profile for ‘Filmmaker Magazine’ we garnered a lot of credibility for the film. Amy Dotson, was the voice again and again, believing that the project could have a wide appeal and could screen in the the world’s leading festivals such as Toronto International Film Festival. She had a belief in the film’s wide platform for distribution before I did and that pushed me to think bigger. Susan Stover was also kind enough to give me all kinds of advice as a producer as well as someone invested in the content. The ending to the film is in part inspired by a suggestion that she made at the lab. I learned that many people in the industry asked about me and the project to her, and that vote of confidence was a magnificent aid.

I think I would never have seriously considered doing a Kickstarter campaign without Jon Reiss’ push for the option at the IFP Lab. I just didn’t believe my project could have enough mass appeal to get the support on Kickstarter. Jon really emphasized that I would not be doing the campaign just for the cash, but also for the outreach. He also provided a lot of fundamental support on how to create the campaign successfully. I took a leap of faith on the Kickstarter campaign but it was seriously one of the best things I’ve done for the film. Financially, the film might not have survived without the backers, but more importantly, I learned from the campaign what a wide, international platform for the film actually exists. That was probably the most wonderful, inspiring, and motivating surprises.

3) The IFP Lab advocated the film to a wide scale of people in the industry. We had two large platforms of support come through the network of people interested in the Lab Fellows. A Tribeca Film Festival programmer approached me, and then introduced the film to the Doha Film Institute, which invited HABIBI to have a Work in Progress screening at the Doha Tribeca Film Festival. Then, and even more monumentally important for HABIBI, the Dubai International Film Festival invited me to submit HABIBI for consideration for the festival’s Enjaaz co-production program. Through Enjaaz, Dubai is a now an active partner of the film. Also, we were solicited by many sales agents. The initial wave of sales agents attracted to HABIBI did not end up working out for us, but because they approached the film early, I very easily cleared out those potential options for the film so I could make a very educated decision when the right sales agents came along.

Filmmaker: Think back to the Sufi parable that was an inspiration to your film. Now that the film is finished, what are your thoughts on it in relation to the film and the way you’ve dramatized it?

Youssef: When shooting in the Occupied Territories, I was faced with extreme limitations on movement and access. These limitations were more inhibiting than even the budget. Is this the film I wrote? No. I think in some ways, these limitations have forced me to become a better filmmaker. They’ve taken me back to my experimental film roots. Re-working form in order to solve problems.

Filmmaker: Your film is screening at Toronto and then Dubai. What are you expectations for each in terms of their different audiences and your subject matter?

Youssef: I hope to learn a lot from the reception at our world premiere at the Venice Film Festival. Because every audience will have a different level of understanding regarding Gaza, my wish is that because of the universal subject matter, a forbidden love story, across the European, North American, and Mid East premieres there will be an engagement with the film. I think the best thing I can do is TRY NOT to have an expectation. I do though, have a deep belief, that at least a few people in each festival audience will deeply connect with the film. People who love poetry, for example. The MAJNUN LAYLA poetry in the film is phenomenally beautiful and for that reason has survived centuries to be shared again and again with audiences.

Filmmaker: Do you have a next feature in mind and, if so, do you think it will take as long?

Youssef: I have a feature script close to completion, by the same title as my short MARJOUN AND THE FLYING HEADSCARF, which screened at Sundance 2006. It’s set in Texas, so that should be easier to shoot than in Gaza! Because it took so many years to make HABIBI, there was a lot of time to develop this script and a few other ideas that I’d love to shoot. How long it takes for these films to go to screen depends, on the mysterious forces analogous to those revolving around falling in love. Being ready, meeting the right creative partners, and it all happening at the right time. I have learned from HABIBI to not predict anything but trust that no matter how small the film is, if I make the film with as much artistic and personal integrity as possible, and align myself with people with the same goals, than the film will have a life. I have learned to work as hard as possible, and not to force solutions on anything. Follow my instincts, after hearing expert advice. Of course working on a film for nine years was very often torturous, but if the second time around takes this long, but I find these platforms for outreach, than I am up for the long slow crawl. I am proud of HABIBI and I rather make fewer things that I love than things which disappoint me, as the creator.