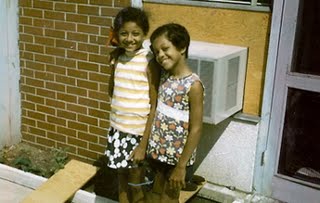 The hardest decision I made in making Family Affair was to ask my father the question, “Why?”

When my father was arrested, I was 10 years old. It wouldn’t be until much later in life that I’d come to comprehend the full magnitude of the crimes he committed against my sisters. For reasons I once could not understand, my sisters had maintained a relationship with my father almost immediately following his release from prison. In November of 2002, my sisters invited me to spend Thanksgiving with them in Kentucky, so I decided to bring along my camcorder. It was only after I arrived that I learned my father was joining us and that this would be the first time I’d see him in nearly 15 years. Although I didn’t know it, this would also be the start of my documentary, Family Affair.

I’d always imagined that if I ever encountered my father after all those years, I’d confront him and ask, “Why did you molest my sisters and destroy our lives?” But when he walked through the door, I watched my sisters, family and neighbors warmly greet this man I had come to see as a monster. At the same time, I felt myself digress in his presence from a grown man to a terrified little boy. As he walked toward me and filled the lens with his ailing body, all I could do is hide behind the camera and say, “How are you?”

I left for Boston feeling like a coward — ashamed that I couldn’t find the courage to confront my father. I was equally puzzled as to why my sisters were accommodating this man — laughing at his jokes, spending time with him on special occasions and effectively comply in creating the illusion of a healthy father-daughter relationship.

When I first started interviewing my father, I knew that I had to ask him why he molested my sisters. But I also knew that my father possessed the power to derail the project by simply saying, “I don’t wish to participate.” He could opt out, not sign a release form and ask that the cameras stop rolling. So for years I’d show up with my camera and simply gather as much background material on my father as possible — his childhood, mother, military days, marriages and so on. I kept waiting for him to bring up the issue, but that never happened.

Finally I got a call from my sister saying that our father was in the hospital and that he might not make it. I went to visit him filled with anxiety and camera in hand. I got permission from the hospital to film and realized that this may be my last chance to ask, “Why?” After five years of skirting around the question, I finally did ask and suddenly the hold he had over me was immediately lifted. I was 39 years old at the time, but it was the first time in my life when I truly felt like a man. I had always imagined this exchange as one that would be contentious, either in his response or my reaction to his response. This scene in the film is crucial, but not how I initially envisioned it playing out. In the film, we hear me ask the question and him start to explain — just as I slowly lower the volume on his response. Some people during rough-cut screenings have commented that they wanted to hear everything he had to say. But for me the scene is more powerful when we don’t hear him attempt to justify what he did — “the drugs” or how “a black man was under so much pressure back then.” I wanted the scene to unfold for the audience in the same way I experienced standing there in the hospital room: realizing that asking the question was more important than anything he could say.