The buzz word at this year’s TIFF is “doc.” For the first time in its 35-year history, the Toronto International Film Festival opened with a documentary: Davis Guggenheim‘s From The Sky Down, which profiles the world’s most popular rock band, U2. Filmgoers and critics are also buzzing over Crazy Horse, by verite legend Frederick Wiseman;  Samsara (by Baraka‘s Ron Fricke); Tony Krawitz‘s The Tall Man,; and Girl Model by Ashley Sabin and David Redmon.

The doc vibe was in the air on Monday morning at a breakfast launch for Focus Foward. Sponsored by Cinelan and GE, Focus Forward invites big-name documentarians such as Morgan Spurlock (Comic-Con: Episode IV: A Fan’s Hope), Nick Broomfield (Sarah Palin: You Betcha) and Jessica Yu (Last Call at the Oasis) to make three-minute socially conscious docs that A-list festivals like Sundance, IDFA and Tribeca will screen. It was a rare bit of good news in an otherwise tough documentary business climate.

A lot of the talk that followed at Doc Conf, TIFF’s annual doc pow-wow of panels and keynotes, focused on raising money, finding distribution and getting eyeballs in front of screens. Idealism vs. cold, hard cash. A weak economy and broadcasters slimming their funding envelopes have forced documentarians on both sides of the border to launch crowdfunding campaigns on platforms like Kickstarter.com and find new ways of knocking on doors. Or rather, find new doors to knock on.

At the Focus Foward breakfast, Spurlock remained undeterred, but realistic: “There will always be people who’ll give you money. You got to find them. When I made the Greatest Movie [Ever Told] I called 650 companies and we got 15 to say yes. It was ten months of just cold-calling, meetings, more cold-calling and meetings…. There’s a private financier for every idea, but you gotta find that guy who’ll say, “Oh my God! This is the greatest idea I ever heard! Where have you been all my life?”

For the sake of disclosure, my co-director and I last year raised Kickstarter seed money for our own African amputee soccer doc, Leone Stars, and won TIFF’s Pitch This! competition this past week. Leone Stars is the first doc ever to win Pitch This! The $10,000 prize and exposure will certainly help, but we’re realistic about the long road ahead. So why do it?

I was reminded of those qualities by Spurlock who said at his Doc Conference keynote with Broomfield that he was a “comic book geek” growing up who took advantage of recently directing The Simpsons‘ 20th Anniversary Special. “The moment we got the job, I said, ‘We’re going to Comic Con!'” There Spurlock interviewed Simpsons’ fans including a dude wearing nothing but red liquid latex dressed as the Simpsons character, Carnage. The interviews led to Spurlock covering the world famous San Diego Comic-Con. 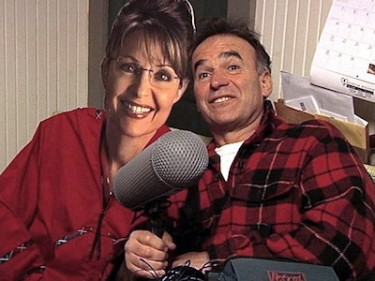 Broomfield’s inspiration for Sarah Palin was more somber: “It has not been easy. I think one’s life impinges on things,” he said, referring to his father passing away a year ago. “The thought of going to Alaska became increasingly appealing.” He went with his longtime partner, Joan Churchill, who used to go on road trips with him to find film ideas. “It was like going back to the way in which we’d worked. I didn’t know very much about Sarah Palin at all. What I love about documentary is that process of self-discovery, not having preconceptions.”

The early afternoon session went straight the to the point when moderator and distribution guru Peter Broderick asked not whether docs can change the world, but how. He cited studies that calculated the social impact, not the box office cume, of films such as An Inconvenient Truth found at the Britdoc site.   After showing a clip from Paradise Lost 3: Purgatory, co-director Joe Berlinger explained how his trilogy of docs about a sensational 18-year-old murder case saved three men from the gas chamber.

Meanwhile, co-panelist Diana Barrett took issue with being introduced as the founder of the Fledgling Fund which “gives money” to films with social causes. Rather, her fund “invests,” but they are looking for a different sort of return. “What is the cause behind your film?” she asked the audience. That was an eyeopener. Since when does a funder ask a filmmaker who social or environmental good their film will produce, instead of the ROI (return on investment) and recoupment period?

Unfortunately, traditional sources of doc funding, TV broadcasters, are not as enlightened: “In the States they expect the same amount of output,” Spurlock said in the morning session. “‘So we’re going to give you half as much money as last time, but we expect it to be twice as good.’ And there’s rising costs around everything.  So, it’s a tough game.”

Broomfield, who raised $30,000 on Kickstarter in distribution funds for Sarah Palin just days before its TIFF premiere asked Spurlock how he raised private financing. “I never had the same person put money into two different projects,” answered Spurlock which made the audience chuckle. “Every film we’ve made has yet to be a financial failure,” except Comic-Con which he is starting to sell.  “Everything has been profitable, which is a miracle.” For instance, Super Size Me cost Spurlock $65,000 out of pocket, and a crew of 40 worked on deferrals.  “While we were making it, I would go on Craigslist at night and move people’s furniture. Whatever money I made I would give to my editors so they could take the bus home or pay their phone bills.” Super Size Me went on to gross $28 million worldwide, but Spurlock was quick to note that he didn’t see all that money.

“I’m just trying to get some tips,” said Broomfield, as did many in the audience.  Spurlock noted that most investors just don’t want to lose their money, that he’ll award producer credits to larger investors without giving up artistic control, and to look upon their investors as “partners on a journey.” Above all, be honest with first-time investors when you tell them, “Film is a difficult business. You should be prepared to lose your money.” However, he added, “people who invest in your film believe in your project, believe in the passion, and the story you’re trying to tell.”