Are audiences ready to spend 85 minutes immersed in the lives of conservative Muslim women in Syria? That’s the big question this week. 17 meetings in, and a box of band-aids later and we think things are going well.

So far we’ve met with POV, HBO, Impact partners, Sundance, SXSW, foreign co-producers, other funders, and a few sales agents. People seem interested, and often enthusiastic. Everyone wants to see the rough cut. And as soon as we think it’s ready to show them we will. We were hoping more broadcasters would have come from Europe, since we met with many of them at the Hot Docs Pitch Forum in Toronto. But we sent those folks an excerpt online, and will follow up. We also attended a marketing workshop as part of IFP’s doc lab – got some great advice about tweaking our log line and website from Caitlin Boyle and Jon Reiss. They had great instincts.

Through contacts of our own we also met with a commissioning editor for Al Jazeera. He was here visiting from Doha, Qatar. We tried to meet with him in Doha the last time we were in the Middle East, but he had to cancel our meeting because he was interviewing Erdogan, the Prime Minister of Turkey. (Oh, well.) He was very interested in the film, and wants to see….the rough cut. After our meeting, he said he wanted to go see some of New York. “I want to see the real people… I want to go to Harlem.” I told him sure, I’d take him to Harlem — me the person from Los Angeles, who’s been to Harlem only a few times before. (I was making a doc about ex-Marines from the Bronx and we used to go eat Cuban food there). He and his colleague had never been on the subway in NYC before and wanted to take a taxi. But I explained if they wanted “real” we were going on the subway, and it would be faster. Reluctantly, they hopped on an express train to 125th St. I had no idea where to take them in Harlem, and from what I had heard about the gentrification of the neighborhood it was going to be easier to find tapas than Cuban, but here we were at the corner of Lenox and 125th. 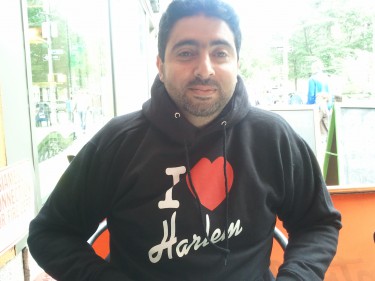 I saw the Apollo in the distance…salvation! I could take them there. I explained to them this was a VERY important place, Smokey Robinson had played here! No response. Ella Fitgerald! Same. Michael Jackson! “Oh my god, Michael Jackson! We love him!” They took a million pictures of themselves in front of the theater, success! We then bought some music together in front of theater from a guy selling bootlegs. “Oh I love this person Kenny G! Should I buy this?” Not on my watch my friend… I squared them away with some Otis Redding and Nina Simone, and off we went to find Cuban.

This was my gravest error of the day. The entire menu was pork, and they were horrified. Even the beans were cooked in bacon. We decided on some chicken in garlic sauce with vegetarian beans and disaster was averted. They were on their way to Norway in a few hours, so they bought some “I love Harlem” sweatshirts, and sped off to the airport. Definitely one of the better meetings we had in New York.

For tonight, I just hope I can get into the apartment I borrowed from a friend of a friend. Documentary filmmaking truly brings new meaning to depending on the kindness of strangers…