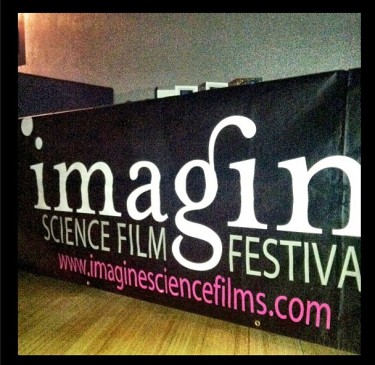 When I was in second grade, I was the kid who brought the boa-constrictor home over Christmas break. I had a chicken leg in a jar of phemaldehyde in my room. I excitedly cleaned out the very deep cut my sister got stepping on glass in the ocean. My Netflix cue has on it every BBC show on how the brain works. My mother was a science teacher. My sister is a pilot for NOAA. I always wanted to be a surgeon — if it didn’t involve so many years of school; Creative Improvised Surgery! I think I’d be good at it.

So, when I heard about the Imagine Science Film Festival, founded by Alexis Gambis in 2008, it was a no-brainer (sorry) that I would attend. On Friday the 14th, I head to opening night at The Museum of The Moving Image. They are screening Mister Nobody, starring Jared Leto and Diane Lane, directed by Jaco Van Dormael. It is the story of the last mortal alive after all other humans are “telemorized.” The dictionary tells me that a telomere is the segment of DNA that occurs at the ends of chromosomes. The film grapples with concepts ranging from string theory to the big bang theory to parallel universes. The Museum of The Moving Image is newly renovated and if you haven’t been there, you owe yourself a trip.

On Saturday I was scheduled to go to the Anthology Film Archives to see a collection of shorts under the title,
“Avant-Garde Science.” I love the Anthology for very different reasons than I love The Museum of Moving Images. Where the latter is clean and fresh and new and bright, the former is filled with nostalgia and feels like home. My plans are thwarted by a minor crises and I am sad to miss this night.

On Tuesday I head to Williamsburg to Cine Club, to attend “Mexican Film Night” (films about science, that hail from Mexico). The films are introduced by Juan Carlos Lopez, the editor of Nature Medicine, who endears himself to me by saying when he introduces himself, “I hope you apologize me for bringing my wine to the stage – but that’s the life of a scientist.” He also talks about the relationship between art and science; they both deal with the human condition. The film that most captivates me from this offering is Flesh That Remembers / Carne Que Recuerda. The director, Dalia Huerta Cano, turns her attentions to people whose bodies have gone through extreme and various transformations, choosing never to show their faces, but rather we hear them talking and see only the part of their body that has been transformed.

Unfortunately, for me, I am leaving town and will not be able to attend a number of screenings between now and closing night on Friday. If you are not leaving town, there are wonderful films to see. Who knew that fruit flies could be so beautiful?