AMERICAN INDIE HIDES OUT IN THE MIDDLE EAST 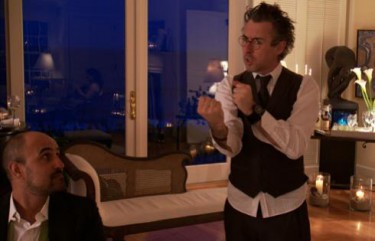 Director Sam Neave and his producer/star Marjan Neshat are both Iranian born, but the films they tend to make together, which include the unfortunately titled 2003’s Sundance entry Cry Funny Happy and their terrific new two shot high-wire act Almost in Love, tend to focus on the romantic travails of upper-middle-class Westerners. As such, they are naturals for the American independent festival scene, where such films usually find their natural constituency, that being other upper-middle-class Westerners. Not so for Almost in Love, their daring second feature collaboration, which had its world premiere this past weekend at the 5th Abu Dhabi Film Festival, the increasingly respected festival run by former San Francisco and Tribeca topliner Peter Scarlet unspooling for nine days in the capital of the United Arab Emirates, just an hour flight from their native land.

Scarlet has brought the knack for terrific Middle Eastern programming he displayed at Tribeca to an even more appreciative group of audiences here in Abu Dhabi (more on that in the Winter issue), but Almost in Love seems to be an anomaly in every way; how did they get this film as a world premiere? Despite its somewhat schematic, arty structural contrivances, it is a seemingly slight but surprisingly rich meditation on friendship, the difficulty of settling down and the importance of being earnest that is performed in humorous and melancholy shades by an odd assortment of performers, most notably Ms. Neshat, Gary Wilmes, Alan Cumming and Alex Karpovsky, for whom this feels like something of a watershed; one of the microbudget American indie world’s most interesting character actors carries the film’s potentially boring stretches. He was born to play a baseball nerd looking for love.

The film is comprised of a pair of 40-minute-plus takes. The first covers a sunset barbecue on a Staten Island veranda that holds a stunning view of lower Manhattan and a significant share of barely concealed jealousy, lust and witty good humor, and it sets up the second, which takes place 18 months later during the dying hours of a wedding celebration which has lasted until sunrise and involves most of the same individuals. In this half, the characters have relocated to a Long Island beach home to celebrate a union that subverts and complicates the implications of our first 40-minute visit.

Puzzling that the film didn’t, apparently, find a home at a seemingly more appropriate place for an American indie debut of its quality and pedigree, but I’d chalk it up as a minor coup for this young festival, which has nearly unparalleled resources and very excited, cosmopolitan audiences that should interest any filmmaker, regardless of its lack of a market. Apparently submitted pretty early in Abu Dhabi’s programming process and ostensibly shot this year (it clearly didn’t require much postproduction), it seems as much of a mystery to the festival’s organizers, who can only fit one or two North American world premieres into their program, as it is to this humble reporter. Regardless, its formal ingenuity and winning cast make it a picture to watch out for.