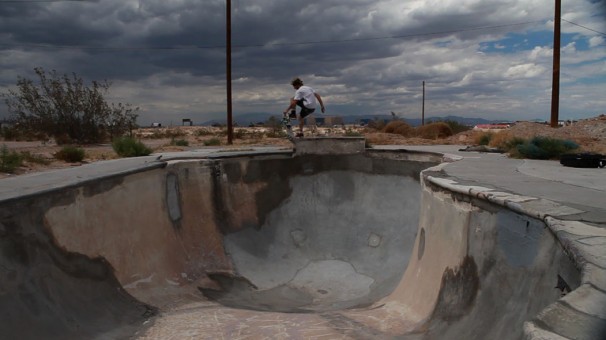 by Brandon Harris
in Director Interviews
on Oct 26, 2011 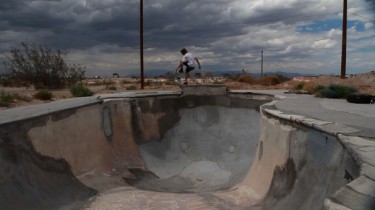 The devastation that the “Great Recession” has wrecked on the California exurbs resonates through the backdrop of Tristan Patterson’s fascinating study of a peculiar California skating subculture in Dragonslayer. Focusing his representation mostly on the drug and alcohol addicted daredevil skater punk Josh Sandoval, nicknamed “Skreech,” Patterson’s doc searches the lives of this talented, troubled young man and his makeshift family of itinerant skaters with tremendous aesthetic grace and ideological empathy; finding great beauty in the suburban wasteland of derelict homes and pools that become their refuge from a largely unforgiving world. With a skating style all his own, Skreech launches himself through the air with abandon and enthusiasm, accepting pain and chronic injuries as a given. Patterson’s portrait seems him as a martyr to authenticity, literally stranded in tract upon tract of abandoned American simulacrum and artifice.

Co-produced with Christine Vachon’s Killer Films, Dragonslayer was a prize winner at this year’s South By Southwest Film Festival. It marks the feature film debut for Patterson, a thirty-five year old Yale grad and LA native. It opens in New York and Los Angeles next week. 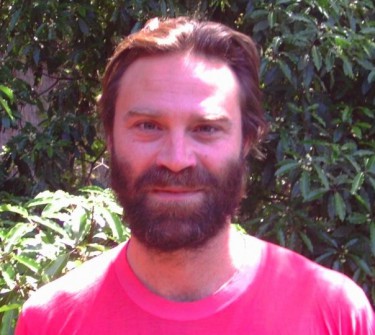 Filmmaker: Under what circumstances did you meet Skreech and after how long did you realize you had to make a film about him and his lifestyle?

Patterson: I went out the Chino, CA to see The Adolescents, this old LA punk band. I’d heard that there guitarist was basically playing a house party for some kids in Chino. There song “Kids in the Black Hole” is always in my rotation. So I went out to the party. I’ve always liked these youth in revolt movies, Over the Edge, River’s Edge, Suburbia, that kind of thing, ’80s punk, stuff I’d discover on VHS as a teenager. So I walked into this party and I felt like I had literally wandered into a scene from one of those movies. Skreetch was at the party. He had this lime green mohawk and a matching lime green Screamers t-shirt and I remember I couldn’t believe that this kid had even heard of the Screamers, they’re another really obscure LA punk band from that era.

So I met him there and at that party there was a pool skating video that was projected against the side of a wall. Skreech was the last skater featured in that video. All the skaters looked one way and he looked totally different, he had this style that was all his own and he had this instinct for what he did. This was right around the time the American economy had collapsed and the foreclosure crisis had hit and I knew that all these pools were empty. I just thought it would be interesting to make something about what was going on.

I tracked him down about a week later. I went out to Fullerton and had breakfast with him. We met at a Panda Express for breakfast. I told him, “Hey, I’d like to make something about you and film you and when I cut the footage together and you watch it, you’ll say, ‘Oh that’s what that moment felt like’ or ‘Oh, that’s what summer felt like,'” and he said, “Yeah, cool, I’m actually going to go to Sweden in a month, maybe you could film that too.” Literally a week after that I started filming and the stuff we filmed is basically the opening of the movie.

Filmmaker: The entire film has a fever dream quality to it, despite being grounded in the economic realities of the time. When was it clear that following him around would lead to this kind of film? Did you know their was a feature in it from the beginning?

Patterson: This thing happened really early on where the first day of filming we broke into this abandoned casino that had burnt to the ground where he had heard that there was a swimming pool. We filmed him cleaning it out. I couldn’t believe it, it probably took him like two or three hours to clean the pool, then he skated for five minutes and then an old lady came out and kicked him off the property. I remember that night being in a hotel room somewhere in California, probably Modesto or something, looking at the footage we shot and thinking that we were getting something that was cinematic. I never thought about it like I was making a documentary, my ambition was to make something that was a piece of cinema, and I remember looking at the footage and thinking I’d never seen anything that looked quite like this. He was so natural in front of the camera that maybe there was a chance to do something that was really new. A little bit later I got the memory card from the camera I had given him, his sort of interpretation of that same day. That idea of colliding our very observational footage with their flip-cam footage really put you inside of his head. I think the first thing he shot was the scene where he charges into the party and tells everybody, “I’m just drunk and filming my eyes!” I remember thinking what an incredible line that was.

So I didn’t know what the movie was going to end up being, but the idea of colliding those two very different kinds of footage would amount to a movie so at that point it became more about this experiment and figuring out what that would ultimately become. Once I had that frame, it started to take shape pretty quickly.

Filmmaker: Do they think this lifestyle is sustainable?

Patterson: In Fullerton, CA there’s this skate park that’s the one you see in the movie. Subsequent to us shooting, its been closed down by the city. It’s been there for a long time and it’s where the old punk scene from Fullerton would congregate and a lot of those people from that era are still at that skate park. One generation raises the next generation and you can see Skreech’s generation starting to raise the generation coming up under them and there really is this sense of these kids running to escape something that have found this new home and family in that world. Those guys from the early ’80s are still living this way so in a way I think it is sustainable, in that they’ve all created this new family that they’re apart of. They all look out for each other in their sort of strange, unique, kind of cool way.

Filmmaker: Do you think their relationships are cohesive enough to last long term, especially among Skreech and his contemporaries?

Patterson: I think that they’re fluid. It’s amazing the way Skreech can kind of wander up and down California and he can kind of arrive in Oregon. He’s gone all over. I was looking at footage of the trip he took to Georgia and it was sort of like wherever he is, his people are there. There’s a kind of world that he belongs to. I think people drift out of it and drift into it, but its been around a long time and I don’t think its going anywhere.

Filmmaker: How did your relationship with Skreech and comapany evolve during the making of the film? Where they involved in the post-production as much as they were the shooting?

Patterson: It was tricky because at first I didn’t necessarily think I was making a feature and I didn’t think it was going to be something that would take two years to make. So the collaboration and level of trust I had from them while I was filming involved not showing them any of the footage I was shooting because I was really conscious of not wanting to affect their performances. I never wanted them to do anything just because I was filming it or change their behavior in some way because they got self-conscious or something. The kind of footage Skreech was shooting on his own kind of let me know a lot, because his footage was so much more personal than a lot of the stuff I was shooting. So I felt like, okay, there is this kind of implicit collaboration going on. Later on I started editing and the editing process just went on and on. I felt like I wanted to get the movie to a place where I held true to my initial promise to him, that this thing I made, when he watched it, would feel like what that initial moment felt like for us. So obviously that’s a really high bar to hit. So when I finally showed it to him, I wanted to be able to say, “I stand by this,” so that if there was something that he didn’t like, it wouldn’t be a situation where I would say, “Oh yeah, you’re right, I don’t like that part that much either.” When I finally showed it to him, I was so nervous. He brought Leslie with him, his girlfriend, who’s in the movie a lot, and they started watching it. Pretty early on they started laughing, when he’s cleaning the pool and he almost slips in, he said, “Oh my God, that pool is so slippery,” and it was almost like he was remembering these things he had forgotten about, he’d say things like, “God, I can’t believe I fucking said that!” Then when Leslie came on screen, he kind of shifted and held her knee and watched and said, “Babe, you look really beautiful.” He was really conscious of making sure that she was okay. So they were like, “Yeah, cool,” they didn’t have any real problems, like, “No you can’t do that” or “You should take this out,” nothing like that.

I’ve obviously stayed in touch with them and I will for the rest of my life I imagine. We just got back from the London Film Festival. London flew them out to go to the premiere there, so that was interesting. They got to have the full red carpet treatment. Leslie had never been to Europe before, so I thought that it was kind of amazing that because they were courageous enough to let me film that moment in time, suddenly we were in London together.