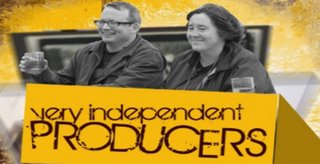 Two stalwarts of the New York indie scene, producers Ted Hope and Christine Vachon, are the hosts of a program on PlumTV entitled “Very Independent Producers.” Five episodes have already been produced, and all are viewable online at the link I just posted.

Here’s how PlumTV describes the program:

On “Very Independent Producers,” Ted and Christine get a chance to share their wit and hard-earned wisdom as they kick back with friends and colleagues from all corners of the film world. Ted, Christine, and their impressive roster of guests share their film experiences past and present and discuss the inner workings of the industry. Wooing financiers, establishing creative control, marketing provocative films, reveling at international festivals – all this and much more makes it way into these candid conversations. Joined by their love for film and their seasoned insight, Ted and Christine give us a humorous, insider look at what really goes into producing independent films.