CAN ANYONE SPARE A BUSINESS MODEL? 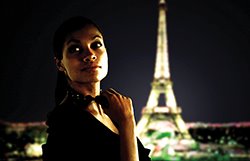 I just finished writing the letter for this week’s Filmmaker newsletter and discussed a few thoughts prompted by my trip this past weekend to the Creative Capital retreat at Williams College. I used some discussions I had with both artists and filmmakers to think further about our need to come up with new economic (and patronage) models that can support media work in that hybrid space between the art world and conventional theatrical distribution. (By the way, if you don’t subscribe to our newsletter, you can do so here on the main page. Each week I’ve been using the space to speculate on the indie scene in letters that are not reposted here on the blog.)

Anyway, I just came across this article by Frank Rose in Wired which makes clear that scrambling for new economic models is not just the province of indie artists and filmmakers at the retreat I just attended. The piece talks about Gemini Division, a new web serial starring Rosario Dawson. The following paragraphs position the world of web video as the 2008 version of the dotcom start-up.

Sure, the YouTube explosion was fueled by amateurs, but it will be showbiz professionals who cash in on Web video. That’s because most big corporate advertisers want a safe, predictable environment — not the latest YouTube one-off, no matter how viral. Once the major brands get on board, millions of ad dollars will follow. Which is why when the writers’ strike idled most of Hollywood last winter, talent agents fielded calls from clients eager to try their hand. At the same time, the fact that a three-minute clip can be shot for as little as $2,000 means Web video will be more open to ambitious neophytes than television ever was — witness the guys behind Lonelygirl15, who now have a second hit Web series called KateModern and a deal to develop more for CBS.

So far, however, this is a gold rush without any gold. Nobody knows how the business is supposed to work — what kind of stories to tell, whether to tell them in 90 seconds or 20 minutes, whether to build a destination site or distribute episodes across the Net, how to generate revenue, how to do it all on a shoestring. The Gemini team is betting they can figure it out. “People ask, ‘What’s your business model?'” says the director, Stan Rogow, during a lull in the shoot. “And I say, ‘This morning’s or this afternoon’s?’ It’s only partly a joke.”