THE ROOTS OF THE DARK KNIGHT? 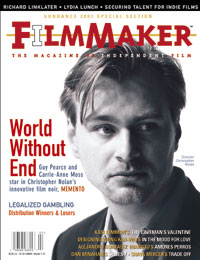 After seeing Christopher Nolan’s dark and philosophically nimble The Dark Knight, I went back to our Winter, 2001 issue and read again Chuck Stephens’ cover interview with Nolan and his screenwriter brother Jonathan on the eve of the release of their breakthrough film, Memento. I was struck by how some of the same issues that elevate the latest Batman movie — its cinematic capturing of everyday dread, its interrogation of the role of the hero, and its clever use of film noir tropes — are discussed within the context of this earlier film. If you are a Nolan fan, check it out. Here’s an excerpt:

FILMMAKER: Both of your films use very inventive and unnerving formal structures, yet their stories are firmly grounded in one of the most familiar of genres, the film noir. How and why do they fit together?

CHRIS NOLAN: For me, film noir is one of the only genres where the concept of point of view is accepted as a fairly important notion in the storytelling, and where it’s totally accepted that you can flashback and flashforward and change points of view. The best film noir always involves a continuous reassessment of things, especially in terms of “Who’s the good guy?” and “Who’s the bad guy?” You want the double cross, you want the surprise, and you want to keep the audience mindful of the fact that they don’t know the full story, and that they can’t trust all the characters. So when Jonah told me the story he had for Memento, the idea of relating the condition this guy has – his inability to keep memories fixed in his head – in terms of a revenge scenario, it seemed like the most interesting thing to do would be to take the film-noir approach, and to tell the story almost entirely from that character’s point of view. His psychological condition and his point of view are crucial to why the structure is there: it’s an attempt to put the audience inside his head, and to make them think about the characters around him and the situations he’s in in the same way that he does.

FILMMAKER: So many independent films borrow material from film noir and crime fiction, and there has been, for many years now, a very definite sense of diminishing returns in that approach. One of the most interesting things about Memento is that you’ve deranged the narrative line so thoroughly that the viewer gets so caught up in putting the story together and the familiar pulpiness of the ingredients almost disappears.

C. NOLAN: If that’s true, that’s great, because I really wanted to use the structure of the movie as a way of reawakening some of the things that used to be so valued in the genre: the paranoia and exaggeration in our everyday insecurities. But the genre’s been used so many times, you have to try very hard to find new ways to energize it. If the audience goes into Memento expecting just another film noir, I think they’re going to be kind of disappointed, because it’s about more than that. Fortunately for us, our European distributors did an excellent job of not trying to sell the film that way.