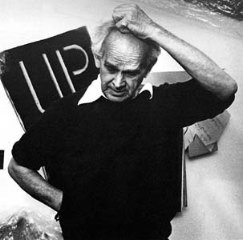 Celebrated and influential film critic Manny Farber died yesterday at the age of 91. At Movie City Indie Ray Pride has a lovely, well-linked remembrance, which opens like this:

Manny Farber, painter, brilliant writer, indelible critic and all-round original whom some aped and few grazed, died in his sleep last night at the age of 91. He had retired from writing and teacher and devoted himself to painting and drawing. To cite Barbara Stanwyck in The Lady Eve, which early Preston Sturges savant Farber would likely not frown upon, “What a life!”

Glenn Kenny also has a long piece on Farber. An excerpt:

If you’ve never read Farber, just stop here and get to it. His collected criticism, in a volume called Negative Space, is one of the touchstone texts of film writing—tough-minded, sharp-eyed, idiosyncratic, often wildly funny, and with a bedrock integrity and aesthetic acuity that even best best of contemporary film critics are hard-pressed to approach, let alone match. He is most often cited for coining the phrases “termite art” and “white-elephant art,” two opposed categories. What I found, and find, most valuable in his criticism is his ability to apprehend the entirety of a film—he got it from every angle.

GreenCine has a comprehensive round-up here, and Karina Longworth has discovered some more Farber internet resources at Spout.

Three years ago Filmmaker published Barbara Schock’s piece on studying with Farber. We’ll have that piece up on the website later in the week.