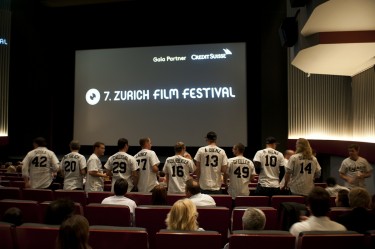 A few years back, the Zurich Film Festival burst onto the map, but for all the wrong reasons. In 2009, Roman Polanski, en route to the festival to receive a lifetime achievement award, was apprehended shortly after landing on Swiss soil. He was never extradited to the United States to stand trial for his mid ’70s sexual escapades with the then underaged Samatha Geimer in Jack Nicholson’s Hollywood Hills home, and now he’s free, having returned for the seventh edition of Zurich’s increasingly important film festival. He screened his “film memoir,” which I simply loathed for its canned, staged quality, its lack of genuine insight into the man and his times. Made by ex-Polanski producer Andrew Braunsberg, Roman Polanski: A Film Memoir had its “secret” world premiere at the Zurich Film Festival. Hot off the heels of Polanski’s lukewarm Yesmina Reza adaptation Carnage, it is the lesser of these decidedly less than stellar Polanski related productions, but enough with that, I’ve already said enough about it on these pages.

Boasting a record number of significant premieres “within the German-speaking realm” of hot international titles in Cannes, Toronto and Venice, Zurich featured both narrative and doc competitions for international and German-language films, although the size of those sections was dwarfed by its rampant Gala premieres and Special Screenings, which make up a more than sizable chunk of the programming. Is that smart? I’m not sure.

A preponderance of Galas seems to lessen the impact of those events, making them less noteworthy and eye catching, while limiting how much attention the competition films get. Sure, they get some big stars to show up (There’s Laurence Fishburne! Look, Sean Penn) and there were some interesting performances in some mostly flawed films by major filmmakers (Woody Harrelson in Oren Moverman’s somewhat unfocused, fascinating Rampart, Rachel Weisz in Terence Davies’ moody, but unfulfilling The Deep Blue Sea, everyone involved in the minor Cronenberg that was A Dangerous Method, all of which made their way to Zurich after finding splashy premieres elsewhere) and a few genuinely transcendent cinematic experiences, such as Andrea Arnold’s new take on Wuthering Heights; it is simply the best ever done, a monumental, heartbreaking film that honestly and with great difficulty tackles the thorny racial issues just underneath the text’s surface.

Bennett Miller’s Moneyball proved to be at once entertaining and ballsy, manipulative and (at times) gallingly inaccurate. It doubles down on the author Michael Lewis’ dubious assertions about how the early adoption of sabermetrics, an arcane series of mathematical formulas to evaluate baseball players, made the early aughts Oakland A’s quite good despite their declining payroll. However, the film completely throws both manager Art Howe (forgettably played by Philip Seymour Hoffman) and handsome ex-A’s staffer and sabermetrics guru Paul DePodesta (played as Peter Brand by the slovenly Jonah Hill) under the bus. Still it provides the opportunity for Brad Pitt to channel his inner Warren Beatty as A’s GM Billy Beane, and for a remarkably loud Dutch baseball team in full regalia to take up over two rows of prime theater real estate for the film’s European premiere. Who says baseball movies can’t travel?

Still the existence of these films at this festival, along with titles like The Ides of March (which really got me going!), while making for well-attended fare, perhaps crowded out films with less star wattage but equal amounts of vigor and life in the competition and in the festival’s adventurous New Turkish Cinema sidebar, which, while not as satisfying at the similar one undertaken by the International Film Festival Rotterdam in ’09, was nonetheless a terrific opportunity to bring local audiences terrific Turkish films such as Seren Yuse’s Majority and Mahmut Fazil Coskun’s Wrong Rosary. Films such as Jeff Nichols‘ sublime meditation of beginnings of mania, the boundlessness of love and the shattered middle American economy Take Shelter and Oliver Hermanus’ Beauty, an ironically brutal look at repressed homosexuality in the South African suburbs, seemed to be greeted politely, but with little of the enthusiasm that awaited some of the bigger-ticket fare.

For me, the most memorable discovery was Cyril Mennegun’s Louise Wimmer, which featured an utterly winning performance from Corinne Masiero as a fifty year old Frenchwoman barely clinging to a job as a hotel made, who lives in her car after a nasty divorce and seems destined for tragedy. It’s the type of role that Gena Rowlands would have killed 35 years ago, but few actresses these days seem quite up to. While it’s not for anyone who can’t stand to hear the same Nina Simone song about eight times, if you get past its pessimistic vibe and sometimes stilted rhythms, it contains one of the most nuanced and honest of recent screen performances. By no means perfect, but a film worthy of much attention and acclaim, it almost begs for a Debra Granik remake.