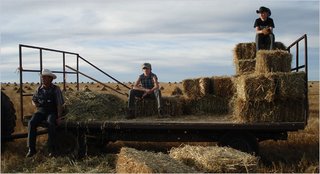 I completely missed notice that Carlos Reygados’s third feature, Silent Light, is opening today in New York. I think this film is a flat-out masterpiece, and I can’t recommend it highly enough. Manohla Dargis writes about the film in today’s New York Times. An excerpt:

I’ve seen Silent Light three times — it had its premiere at the 2007 Cannes Film Festival — and find it more pleasurable and touching with each viewing. After having wowed and appalled international audiences with bravura technique in his first feature, Japón (2002), and assaultive provocations in his second, Battle in Heaven (2005), which opens with the kind of sexual encounter that keeps nunneries in business, Mr. Reygadas has quietly altered his visual style to brilliant and meaningful effect. His silky camera movements and harmoniously balanced widescreen compositions still enthrall, but he now comes across as less committed to his own virtuosity and more invested in finding images — of children bathing, trees rustling, clouds passing — that offer a truer sense of the world than is found in melodramatic bloodletting.