by Nicholas Rombes
in Columns, Filmmaking
on Jan 2, 2012

For the first time since Frank’s prolonged assault on Dorothy, the camera has shifted perspective, freeing us from Jeffrey’s gaze. A new space opens up, one that has not been revealed entirely before, with the kitchen in the implied space behind the camera, and the dark, cave-like shadow of the apartment door area occupying the frame’s center. Jeffrey—still in his black socks, humanized—crawls toward Dorothy who will, when he caresses her head, jolt as if bitten by a snake. The implication is that she is still enmeshed in Frank’s world, even though he is no longer physically present.

This is the dark magic of Frank, the dark magic of abuse. It’s always there, even when it’s not. Its after effects are hyper-coded into the frame: in Dorothy’s body, hugging itself, in the television antenna (slightly crooked as if warped by the power of Frank’s signal), the green radiator (a silent witness to human drama in several Lynch films), the chair rail molding running parallel to Dorothy’s and Jeffrey’s bodies, and most of all in the absent (now haunted) space on the screen that moments ago held Frank’s body. In Inland Empire, Nikki (Laura Dern) glimpses—in moments of pure transcendence—the shapes that linger in the haunted spaces of the frame. 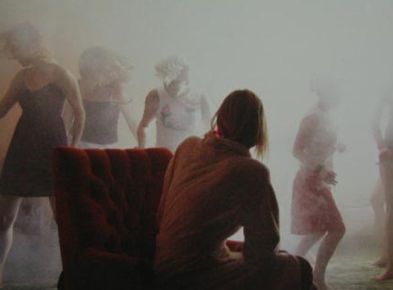 You get the sense in the frame from Blue Velvet that there is also something there, besides Jeffrey and Dorothy, that can’t be seen. A third presence, made known to us in the wide open spaces of the frame. How to detect something that is absent? How to feel your way into a world of darkness so that you can emerge back into the light, uncontaminated? The dream of Blue Velvet is that question. The answer is a nightmare.