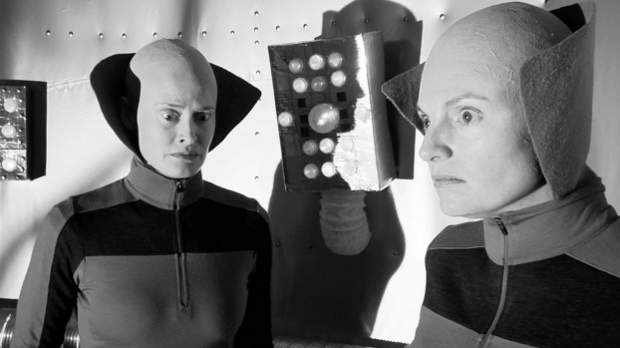 by Holly Herrick
in Columns, Filmmaking
on Jan 5, 2012

(Codependent Lesbian Space Alien Seeks Same world-premiered in the “Park City At Midnight” section at the 2011 Sundance Film Festival. It opens for a one-week theatrical run at the reRun Gastropub in New York City on Friday, January 6, 2012. Visit the film’s official website to learn more.)

“I have to make it clear that I hate all dramas,” Madeleine Olnek told me in an interview the other day. “I think making dramas is immoral, if you are capable of making a comedy.”

Olnek is a New Yorker who writes and directs comedy films. Plays too. As she’s predominantly worked in the short film arena up to this point, her cinematic talents have been under-appreciated. Her Sundance-vetted shorts, Hold Up and Countertransference, are replete with an original sense of humor and the kinds of completely unpredictable, fully New York, totally pathological characters who inadvertently impose their insanity on everyone around them. The victims are often hilariously hapless, slightly wounded creatures, incapable of defense or comeback. One of my favorite examples is the lesser-seen Make Room For Phyllis, in which a shy woman is made to believe she’s being invited to participate in a romantic/sexual threesome situation with a heterosexual couple, when in fact the couple is luring her into their domicile to take care of all the household chores.

As such, like the very best comedies, Olnek’s are tinged with pain. And while all the shorts feature queerness, the action or conflicts in the films are only indirectly related to gay life or identity. This has recently changed with the release of her first feature, Codependent Lesbian Space Alien Seeks Same, a black-and-white sci-fi retro-New York micro-budget completely absurdest independent comedy, which also manages to thoughtfully address the pain and confusion of sexual prejudice. Now Olnek has proven that she can make an important film without having to make a dramatic one.

No need to explain the splashy, immediately clear metaphors: Olnek’s lesbian aliens arrive in New York City looking for love, trying not to be noticed by the literally straight-laced federal authorities who have the power to control their destinies and send them back home to their planet, separating the lesbian aliens from their earthbound loves. Set apart by their obvious strangeness and unable to blend seamlessly into the foreign landscape, the aliens are exceedingly vulnerable. Not far off, however, are their earthly counterparts; feeble loner Jane (Lisa Haas), soon to be Zoinx’s (Susan Ziegler) love interest, is practically living in hiding as a greeting card store clerk.

In defense of this outlandishly high concept, anyone questioning the applicability of the creative choice to represent gay life metaphorically as alien invasion might consider that we still live in a society where people of the more popular sexual orientation have decision-making power over the basic civil rights of the less popular one. This disjunction between where we think we are socially with gay integration and where we still find ourselves within the law and greater society is also brilliantly studied in the aesthetic of Codependent; taking place in an unspecified contemporary time period with references to both 1950s sci-fi and independent films of the ‘80s and ‘90s, the film seems to introduce future and past all at the same time, while retaining a retro feel.

Never giving a reason for their manhunt, the two government agents (Dennis Davis and Alex Karpovsky) who tool around town in search of lesbian aliens seem all the more insidious; their motives speculative, and potential actions dangerous. While they label lesbians and aliens as outsiders, they postulate (to great comedic effect) about their own questionable ethics and bizarre, privileged obsessions—such as the senior agent’s Little Mermaid-themed wedding. The agents’ senseless disparaging, superiority complexes, and social advantage point heartily to real-world-straight-people aloofness, making the agents’ buffoonery genuinely unsettling.

And while Olnek can brilliantly maneuver a script that both slices and entertains in a satirical breath, there are moments of pure, unfettered comedy, from the absurd to the slapstick, that feel classic and even quotable. Like most movie aliens, Olnek’s have a childlike fascination with Earth’s most pedestrian innovations: a revolving dessert case is true love incarnate, a commercial clothes dryer better than psychedelics. As the aliens move with great difficulty through their new lives in New York City, their wit is so sharp that the original concepts and jokes become even funnier as the movie progresses. Olnek’s grasp of her comedic arc is enviable. She sustains, and even pushes the laughs further, with each successive one-liner.

One hopes that Madeleine Olnek will continue to work in the feature realm, and that her future films will be as hilarious as this one, our sides splitting open further with each sucker punch of ugly truth.