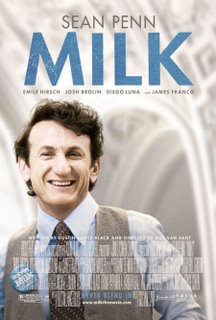 Several articles from Filmmaker‘s Fall issue are online here on the site, but one piece not included in our online offerings has just been posted on the FilmInFocus site. It’s an interview with Gus Van Sant by Peter Bowen that appeared in the special Gotham Award tribute section, and I think it’s an excellent look into Van Sant’s creative process on his latest film, Milk. And, by the way, the IFP is selling individual tickets to the Gothams this year. More info available here.

Filmmaker: How did your story veer from the historical record?

Van Sant: Mostly we tried to keep it very accurate. In some cases, where we had actual filmic record we just recreated the scene. But there is a scene when Harvey is meeting with Representative Phil Burton over Proposition 6. Cleve Jones, who was our advisor, had actually been at that meeting and explained that Harvey had put on a real show, running around the room and flailing the paper in the air. He was livid because they had left the word “gay” off the flyer fighting back against Prop 6 [the proposed bill to ban all gay teachers in California]. We were shooting in the exact room that the meeting took place, with the real costumes, even with the same furniture, which hadn’t even been reupholstered since then. We had Sean do an intense version, even wiping his ass with flyer before throwing it in the fire. But it wasn’t keeping with the rest of the film. So we have a much more calm version in which Milk never gets out of his seat.

Filmmaker: For many, especially in the gay community, Milk’s death is a powerful and significant historical date. What was your visual strategy in trying capturing the life and times of Harvey Milk?

Van Sant: We started off with this one plan, but than quickly aborted it. We’d been working a lot with the styles of the Hungarian Bela Tarr and documentary maker Frederick Wiseman. And also Chantal Akerman’s Jeanne Dielman, 23 Quai du Commerce, 1080 Bruxelles, was a big influence, especially in Last Days — before we shot Gerry, we constantly watched Jeanne Dielman. For Milk, we were going into a Frederick Wiseman world, so we were going to hire documentary filmmakers, or people who have shot alongside some of the more famous documentary makers. But we weren’t shooting in black and white (like Wiseman), and that really changed how it was going to look. And then we screened what we’d shot, and it looked a lot like what other people were doing on TV. Shot on 35mm and in color, it didn’t really look like Wiseman. When we realized this, we quickly bailed out. We were like, “Holy shit, this doesn’t look any different than The Office.”

Read the whole interview at FilmInFocus.